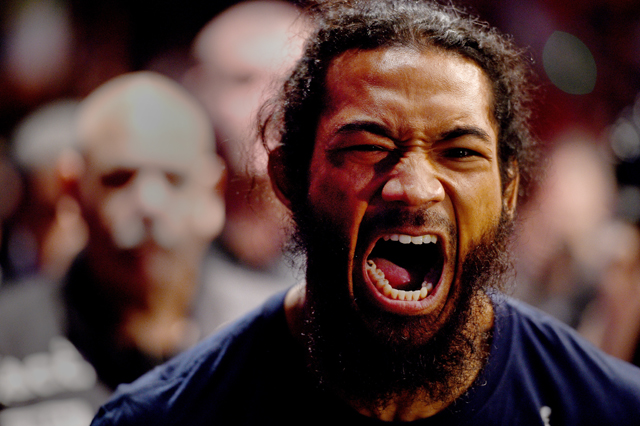 Benson Henderson has dropped back-to-back bouts for the first time in his career. | Photo: Jeff Bottari/UFC/Zuffa/Getty 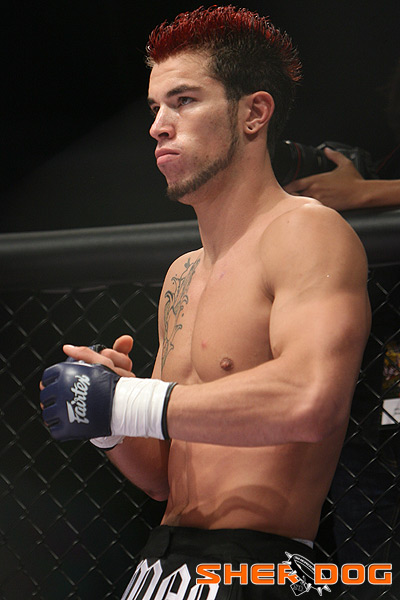 Photo: Dave Mandel/Sherdog.com
Thatch has won 10 straight.
The Ultimate Fighting Championship hops back onto its staple platform, Fox Sports 1, with an underwhelming roster of fights that has been decimated by injuries. Scheduled headliner Tarec Saffiedine went down six weeks prior to the card, and Zuffa pulled his planned opponent, Matt Brown, for a new fight with Johny Hendricks at UFC 185. Stephen Thompson and Brandon Thatch stepped up to the main event, but the karate master was forced to bow out with an ailment of his own two weeks before the scheduled fight.

Former UFC lightweight champion Benson Henderson, who had been planning a move to welterweight, jumped in to save the day. His matchup with the quick-rising Thatch is certainly compelling, and the co-main event features a potentially violent matchup between action fighter extraordinaire Max Holloway and veteran Cole Miller. The card drops off quickly after that, however, with a bare sprinkling of compelling matchups further down the lineup. The UFC underbooked this event in the first place and cannibalized it further by removing Brown; while it offers a few fun fights, I cannot imagine it will draw much in the way of viewership.

Let us take a look at each individual matchup for UFC Fight Night “Henderson vs. Thatch” on Saturday at 1stBank Center in Colorado:

THE MATCHUP: A lack of familiarity with Thatch’s body of work is understandable, given that he has only fought twice in the UFC and has spent more than a year sitting out with a series of injuries. Make no mistake, however, Thatch is one of the most talented young fighters on the roster -- a bigger, stronger and faster version of Carlos Condit. He has finished each of his 11 victories inside the first round, seven of them in less than a minute, and could easily be the next big thing at welterweight. Henderson is taking an enormous risk in moving up a weight class on short notice against someone as dangerous as Thatch less than a month removed from his last fight, though after dropping two in a row and three of his last five at 155 pounds, it was hard to see a future for him in the lightweight division.

Thatch is a pathologically aggressive but polished and skilled pressure fighter. He uses his devastating kicks, stance switches and technical footwork to cut off his opponents’ angles and either force them to the fence or make them stand still. Once they do, Thatch unloads. He throws vicious punching combinations and punctuates them with silky-smooth high kicks, sneaks in stepping and flying knees to the head and body if his opponents change levels and is always looking to tie up at close range. If he can lock up in the clinch, Thatch morphs from merely devastating into something truly terrifying. His long limbs give him ridiculous leverage, and he excels at transitioning between collar ties, side clinches, frames and whizzers, all while slamming home sharp knees to the head and body. Wrestling is not Thatch’s best facet, although he can hit a nice ankle pick or knee tap. His aggressiveness gets him in trouble if his opponent can time his forward movement with a reactive shot, but he sprawls well and does an excellent job of hipping out and getting back to his feet if taken to the ground. He boasts a solid guard, nice sweeps and great instincts for scrambling to dominant positions in transitions, and if he manages to get on top, his strong posture and vicious power make him an intimidating threat to finish with ground strikes.

After a dozen fights in the UFC and six more in World Extreme Cagefighting, we have a much better handle on Henderson’s game and its consistent evolution. The former collegiate wrestler and top-position bomber/scrambler shifted first into a close-range grinder and is now in the process of transforming into a more than competent range striker. In his current incarnation, Henderson fights much longer than his 5-foot-9 height would suggest. He is better now at covering his powerful, rangy kicks with punching combinations; he takes cleaner angles; and he is more willing to exchange in the pocket. The increased threat of his hands makes his kicks infinitely more effective by drawing his opponent’s hands out of position, especially when he goes to the head and body. He also finally seems to be solving the problem of limited offensive volume that dogged him throughout his run as champion.

As his range striking gets better, however, Henderson seems to be forgetting about the rest of his game. He seems to decide on a single skill set at the beginning of the fight and then rolls with it to the exclusion of everything else. Henderson rarely shoots for takedowns these days, and it has been a very long time indeed since we saw him dropping heavy shots from top position and scrambling with wild abandon. He remains a bit reckless inside the guard, although it takes an elite guard player with lightning-quick reactions to get him in real trouble. All of the pieces are there, and he remains a plus athlete with great quickness, but he has not shown a complete, well-rounded performance in quite some time.

THE PICK: This fight is full of unknowns. Thatch is coming off a long layoff and several injuries, while Henderson fought less than four weeks ago and is moving up to a new weight class. Thatch will have a ridiculous size advantage over the former lightweight, along with a huge edge in power. I see two likely scenarios here. In the first, Thatch’s size and reach advantage will be too much, as he walks down the smaller Henderson with kicks, punching combinations and hard knees on the inside. In the second, Henderson’s move up to 170 pounds accentuates his quickness and allows him to stick and move while staying out of Thatch’s wheelhouse. If he could take down Thatch and get in work from the top, that would be ideal, but the size disparity makes that a tall task. The first scenario seems more likely to me. Henderson struggled with Rafael dos Anjos’ pressure and aggression, and Thatch is much bigger, more powerful and just as polished with his footwork. It would not surprise me at all if Henderson outlasted Thatch and took a decision, but I think Thatch’s constant stream of offense will be too much for “Smooth” to handle. Thatch by knockout in the second round is the pick.