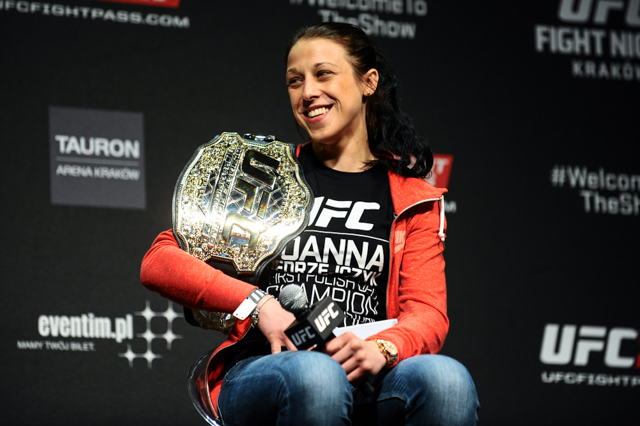 Joanna Jedrzejczyk has enjoyed a quick rise to the top. | Photo: Dave Mandel/Sherdog.com


The Ultimate Fighting Championship on Saturday returns to Germany a year after its last sojourn and to its Fight Pass platform for the third time in 2015. The card’s headliner is excellent, a strawweight title fight between newly crowned champion Joanna Jedrzejczyk and challenger Jessica Penne, but after the main event, things drop off quickly.

The undercard brings enough to interest the hardcore fan, but few others will be enticed. Dennis Siver takes on Japanese stalwart Tatsuya Kawajiri in the co-main event, while up-and-comers like Makwan Amirkhani, Mairbek Taisumov, Alan Omer and Niklas Backstrom provide some measure of intrigue.

Let us take a look at each UFC Fight Night “Jedrzejczyk vs. Penne” matchup: 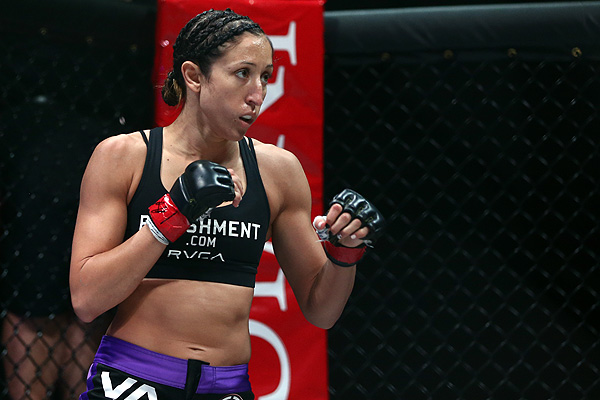 THE MATCHUP: Strawweight champ Jedrzejczyk draws longtime women’s MMA stalwart Penne in an excellent fight. The Pole debuted in the UFC with a dominating win over Juliana de Lima Carneiro, took a contested split decision from Claudia Gadelha to secure the title shot and then absolutely destroyed Carla Esparza to win the belt. Penne was the fourth seed on “The Ultimate Fighter 20,” beating Lisa Ellis and Aisling Daly before falling to Esparza. She rebounded with a decision win over Randa Markos at the finale, and a dearth of other options at 115 pounds led to the booking with the champion.

Jedrzejczyk is a serious talent with great physical tools and elite power in her strikes. A former muay Thai competitor, she spent time in Holland training under the legendary Ernesto Hoost and competing against solid Dutch competition; and it shows in her game. She works behind a crisp jab that she whips to the head and the body and then follows with an overhand or a cross-hook sequence. The digging left hook to the body, a Hoost specialty, is likely her most efficient punch, but she places her shots beautifully around and through her opponent’s guard. The right overhand is a specialty for this reason, and Jedrzejczyk feasts on those who rely on a high guard to defend shots. She can operate equally well moving forward or on the counter, everything she throws has potentially fight-ending force and she produces a tremendous volume of offense. It might behoove her to kick more; while she relies almost entirely on her hands, likely to avoid the risk of takedowns, Jedrzejczyk owns a technical and vicious arsenal of round and front kicks that she only utilizes once or twice a fight, if at all. If she has a weakness on the feet, it lies in her defense, which relies mostly on distance and angles rather than a combination of parries, blocks and head movement in addition to spacing.

Jedrzejczyk’s striking game only functions at an elite level because the rest of her skills are on point. She is an exceptional clinch fighter with great balance and excellent use of frames, collar tie and side clinches to create space into which she sneaks slashing elbows and hard knees. Her defensive wrestling is elite, and she excels at dropping knees, elbows and punches on opponents who attempt to grind her against the cage or spam takedown attempts. It is difficult to hold her on the mat, but that is essentially the extent of what she has shown as a grappler.

Penne is mostly a grappler, and a good one, though she has added some striking and wrestling skills to her repertoire over the years. A rangy 5-foot-5 with long arms, she works behind a crisp 1-2 that she throws early and often and mixes in the occasional low kick. She is durable and game but far too hittable even by relatively mediocre strikers; in any case, her work at range mostly serves as a bridge to get her into the clinch. Once locked up with her opponent, Penne immediately looks for her trademark head-and-arm throw or less frequently a trip. On the mat, the longtime Brazilian jiu-jitsu black belt really shines. She is exceptionally flexible and showcases a lethally aggressive guard, with a lightning-fast triangle-armbar chain and slick sweeps. She excels at finding the back, both from positional advancements on top and in the scrambles, and has a fondness for the rear-naked choke.

THE PICK: On paper, this does not seem like a terribly competitive matchup. The American lacks the kind of elite wrestling game that would bring her venomous grappling into play on the mat, and to make matters worse, she gets almost all of her takedowns from the clinch, where Jedrzejczyk is a monster. That means this will likely transpire at range, where the Pole is miles beyond Penne in power, hand speed, offensive output and technical skill. It gets even worse when we take into account Penne’s poor defense and willingness to engage. If Randa Markos was consistently able to put hands on her, Jedrzejczyk certainly will, as well. The pick is Jedrzejczyk by knockout in the second round.