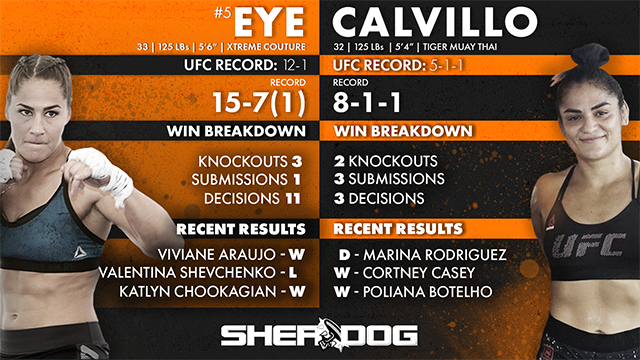 When it was announced that Jessica Eye and Cynthia Calvillo would headline UFC on ESPN 10 this Saturday in Las Vegas, it was immediately considered one of the weakest main events in the promotion’s history—even if Eye was a recent title contender and Calvillo had spent most of her Ultimate Fighting Championship career as a top prospect. Once the full lineup was announced, the UFC certainly did not do them any favors in terms of support.

This cast in particular sticks out as the UFC just throwing together whoever was available on this date, and for whatever reason, it was not much, at least from a marquee perspective. On the plus side, nearly everyone on this card has a track record of entertaining fights, so this should be another excellent offering from an action standpoint, though virtually none of it will mean much moving forward.

This obviously is not a main event-level fight by the UFC’s typical standards, but this slot is a nice marker of achievement for Eye, who surprisingly has a case as the second-best female flyweight on the roster. Eye’s unearned confidence makes her an easy target, and that dynamic did not get much better over the course of an unsuccessful bantamweight career. She endured a skid of four straight losses that saw her basically snatch defeat from victory in every way possible, whether through bad decisions, poor fight IQ or refusing to pull the trigger. Luckily, the UFC stuck with her long enough that once the promotion launched its women’s flyweight division, Eye was one of the first to cut down; and she has not looked back since. At a smaller weight class, Eye finds herself in a position where she can be a bully, and everything has clicked as a result. During a three-fight winning streak that earned her a flyweight title shot, she managed to rely on her offensive wrestling to control rounds when needed, and she managed to get past a point fighter in Katlyn Chookagian simply by charging forward and pressing her offense. Of course, none of those positives mattered once she ran into flyweight champion Valentina Shevchenko, who dominated the grappling exchanges and then made Eye look absolutely foolish on the feet, knocking her senseless with a surprisingly violent head kick for a second-round knockout. There is probably no way for Eye to close that gap, but to her credit, she is certainly trying. She has started anew in Las Vegas and looked quite good in her last win over Viviane Araujo, rediscovering some more technical aspects of her boxing game and getting a one-sided win as a result. Given how their first fight went, it will take a while for Eye to earn another shot at Shevchenko, so now it is up to the former title challenger to keep racking up wins. Next up: She will attempt to spoil Calvillo’s flyweight debut.

Calvillo is an interesting prospect, and while she falls firmly into the category of fighters the UFC has overhyped and pushed too hard, it looks like she is going to come out on the other side as a solid fighter. It is worth remembering Calvillo’s lack of experience when the UFC picked her up. While she had enjoyed a solid amateur career, she was in the UFC about six months after her professional debut. After she hit the ground running with submission wins over Amanda Bobby Cooper and Pearl Gonzalez, the promotion was firmly in the Calvillo business, giving her a co-main event slot in Scotland against Joanne Calderwood. Calvillo skated by with a decision win there, but her issues as a prospect came to a head a few months later in a loss to Carla Esparza. The Californian is legitimately excellent on the mat, but she remains overconfident in a striking game that, while improving, is still a work in progress. That cost her in the Esparza fight, where Calvillo seemed to think she was winning a fight that she was clearly losing, and it has made her fights since a mixed bag. While she has won two of her last three and taken the third to a draw, it feels like she could be making things a whole lot easier for herself if she just decided to wrestle. At the very least, Calvillo responded to adversity against Marina Rodriguez by pressing for takedowns and dominating enough on the mat to earn a draw, but it remains unclear why she needs to get hit in the face a bunch before making that decision. There is probably some conscious attempt to get in rounds on the feet to round out her game in the long term, but after the loss to Esparza, there is always the fear that Calvillo simply thinks she is much better on the feet than she is in actuality. Constant weight issues have forced Calvillo to move up to flyweight, and it is an interesting change. While wrestlers and grapplers often have trouble translating up a weight class, this is also a much more wide-open division in which Calvillo can move up the ranks quickly, particularly since the UFC seems willing to give her some big chances like this one.

This is a well-made fight and a bit of a short-term referendum on Calvillo. On the feet, Eye should be able to take this. While Calvillo has been improving her striking game, Eye can either bully her based off power and volume or pick her apart in a manner similar to Araujo. However, if Calvillo knows her own strengths and makes a concerted effort to take things to the mat, takedowns should be there for her. Eye has shown some improved offensive wrestling since moving down from bantamweight, but her defensive wrestling remains suspect; the much slighter Araujo managed to lure her to the mat a few times, and Calvillo is much better in that phase of the game. As always, Calvillo will probably make things more difficult than she needs to, but she has shown a willingness to finally shoot for takedowns when she is actually in danger. Eye hits the sweet spot of where she will likely hit Calvillo enough to force her into her strengths but not hard enough to knock her out. Of course, there is always the chance that Eye makes her own poor decision and starts grappling with Calvillo herself. This could just turn into a boxing clinic from Eye, but the pick is for Calvillo to do enough to get the decision.

« Previous The Big Picture: Fighting Together Next Martin Vettori on Karl Roberson: ‘I Will Fu-king Hurt Him For Sure' »