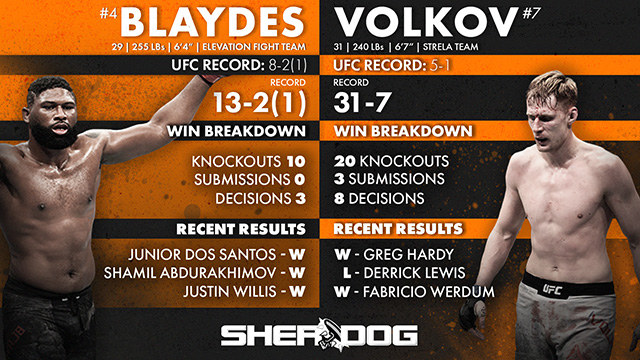 This is more like it. Save for the numbered events, this might be the strongest card the Ultimate Fighting Championship has thrown together during the COVID-19 pandemic. While it may lack immediate relevance, UFC on ESPN 11 this Saturday in Las Vegas ticks all the boxes of a second-tier show, with trusty veteran names like Jim Miller and Raquel Pennington, top prospects like Roosevelt Roberts, an excellent co-main event and a meaningful headliner. Curtis Blaydes-Alexander Volkov represents one of the better heavyweight fights the company could have put together.

Now for the UFC on ESPN 11 “Blaydes vs. Volkov” main card preview:

The heavyweight title picture finally looks to be moving again, and that is good news for Blaydes, who has done well to stay busy in the meantime. Blaydes made his UFC debut in 2016 with enough hype to be favored over Francis Ngannou, and it is easy to see why. He is an absolute physical force as a wrestler and capable of some brutal ground-and-pound that has only gotten better over time. Blaydes wound up dropping that fight to Ngannou thanks to the Cameroonian’s suddenly improved takedown defense, but “Razor” still looked promising going forward. If nothing else, he showed some impressive durability: Doctors had to step in and stop the bout, as Blaydes was willing to fight through a bruised and swollen eye. Within two years, Blaydes had worked his way up to wins over heavyweight stalwarts such as Mark Hunt and Alistair Overeem, which gave him an opportunity to avenge that loss to Ngannou, who at that point had also established himself as a top heavyweight. However, “The Predator” was coming off of a terrible performance against Derrick Lewis. Even in the rematch, it was Ngannou who quickly took care of business and further mucked up things for Blaydes, assuring that the American would continue to remain behind him in the line of contenders. Blaydes spent 2019 taking a step back and earning dominant wins over Justin Willis and Shamil Abdurakhimov, but it feels like he had another breakout moment against Junior dos Santos in January. Dos Santos focused on stopping Blaydes’ wrestling and succeeded in doing so, but the Elevation Fight Team standout just used the opportunity to show the best striking of his career and shockingly outboxed the former champ on route to a second-round knockout. Blaydes is now certainly a championship-level fighter, though he finds himself in the unenviable position of having to wait out other fighters—namely Ngannou—to finally get his chance at the belt. He looks to keep his momentum going here against Volkov.

After a long career that included a stint as Bellator MMA’s heavyweight champion, Volkov figured to quickly establish himself as a going concern once he hit the Octagon. Indeed, “Drago” hit the ground running in the UFC. While he was not the most dynamic performer, he kicked off his UFC career with four straight wins, highlighted by a comeback victory over Fabricio Werdum that fully established the Russian as a title contender. Everything was running along smoothly—until Lewis happened. Volkov was doing Volkov things, keeping Lewis at range with his considerable frame and cruising to a clear decision win, until Lewis—apparently powered by his overheated gonads—decided to rush in for the finish and knock out Volkov in the last minute of the fight. In the ensuing year and a half, Volkov has not had the opportunity to do much to regain his momentum. Main events against Overeem and dos Santos fell through for various reasons, so Volkov’s lone fight in 2019 resulted in an unspectacular win over Greg Hardy. While this does feel like a keep-busy fight for Blaydes as he attempts to find his way to a title shot, this is also a huge spot in which Volkov can crash the party and become a contender once again.

Volkov’s loss to Lewis shows off the main problem for the Russian. While he cuts an intimidating 6-foot-7 figure, Volkov is always going to be at a disadvantage when it comes to finishing ability. Against a vast swath of his opponents, Volkov’s size is usually enough to isolate him against damage and allow him to win rounds, but when it comes to facing the very top of the division, “Drago” is left with one of two options: Either put together a perfect performance over 15 or 25 minutes, or risk getting finished in the hopes that his opponent will eventually tire out and hand Volkov the win. Neither seems all that likely here. While Volkov’s reach is likely to frustrate Blaydes for a bit, takedown defense has always been a weakness for the Russian; and Blaydes has the type of crushing top game that Volkov is unlikely to survive for any period of time. If things go wrong for Blaydes, this is the type of fight where he is likelier to win ugly than outright lose. The pick is for Blaydes to overcome a slow start and eventually score a third-round stoppage.