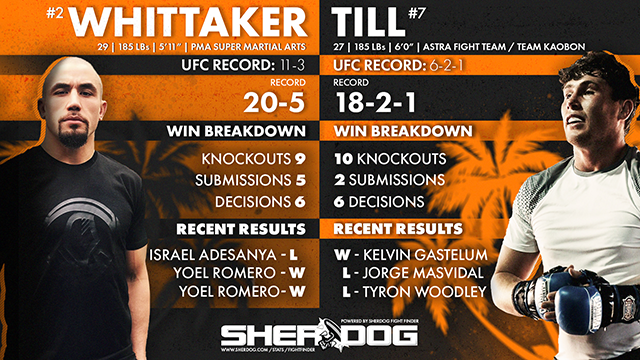 The Ultimate Fighting Championship wraps up their July stint on "Fight Island" with a bang, as this main card has a little bit of something for everyone. In fact, that's true of the card in general -- it almost has to be with 15 fights on the overall docket -- but this seven-fight main card covers almost every base. The main event between Robert Whittaker and Darren Till is both interesting and relevant, there's harkening back to some past eras with the Mauricio Rua-Antonio Rogerio Nogueira and Fabricio Werdum-Alexander Gustafsson bouts, and there's some top prospects, where it's Marina Rodriguez attempting to become a strawweight contender or Khamzat Chimaev looking to make some history. The worry is that ESPN's pacing makes it a long night, but the action itself should mix things up enough to be interesting.

Hey, remember Whittaker? It wasn't all that long ago that he looked to be the future, both of the UFC's middleweight division and of mixed martial arts in the Oceania region, but over the last few years he's suddenly become a forgotten man. Whittaker's ascent up the middleweight ranks was a pleasant surprise; after winning a one-off Australia versus United Kingdom season of “The Ultimate Fighter,” “The Reaper” had a rocky start to his UFC career as a welterweight, so a move up to 185 pounds seemed more like a last resort than a strategic move for success. But Whittaker immediately announced himself with knockout wins over Clint Hester and Brad Tavares, which started a winning streak that quickly put Whittaker near the top of his new division. Whittaker's first UFC headliner saw him handily beat Derek Brunson, which put him firmly into contender status, but it was still impressive to witness his breakout 2017; he beat Ronaldo Souza as decisively as anyone had in years, and then took home the interim title with a win over Yoel Romero in an absolute war. Whittaker looked set to be one of the young pillars of the UFC going forward -- and carry the flag for a new region of the world for the promotion -- but his title reign unfortunately never gained much momentum. For one, Whittaker never got the chance to unify the titles; Georges St. Pierre defeated Michael Bisping for the undisputed title and retired shortly thereafter, which led to Whittaker quietly getting elevated to the sole champ. And injuries kept him from having a huge homecoming as Australia's first UFC champion; Whittaker was set to face Luke Rockhold in Perth and Kelvin Gastelum in Melbourne, but both affairs were scuttled due to a staph infection and an abdominal hernia, respectively. Even Whittaker's lone successful title defense fell somewhat flat from a legacy standpoint; the fight itself, another five-round war against Romero, was one of the best fights of 2018, but Romero missing weight and the fact that it was a closer fight than the first one didn't do a ton to elevate Whittaker's championship aura. After all that, Whittaker finally made it to the cage for another title fight in Melbourne, but at this point the narrative was less about Whittaker and more about Israel Adesanya, the challenger who had blazed his own path up the middleweight ladder. Adesanya was and is flashier and captured more imaginations in his quick rise up the ranks than Whittaker did, and when it came time for the fight, Adesanya proved to be on another level, dictating the contest before eventually putting Whittaker away in the second round. Assuming all these wars and injuries haven't caught up with him, Whittaker should still be among the best fighters in the world, but now he's in the tough position of being stuck besides Adesanya, both in the middleweight division and in terms of being a regional star. So it's up to Whittaker to retool, rebuild and find his way back to the top of the mountain, which starts here against Till.

Till's had an odd and inconsistent career thus far, some of which says more about the UFC's matchmaking than anything he's done. Despite his Liverpool roots, Till was training in Brazil early in his career when he got the late-notice UFC call for a card in his adopted home country. Till had a fairly weak resume up to that point, both in terms of experience and strength of schedule, but he made good on his potential during that first UFC bout, knocking out Wendell Oliveira with some brutal ground-and-pound. In his next fight, Till was cruising towards a breakout win over Nicolas Dalby until everything went south in the third round; Till suffered a dislocated shoulder that, on top of costing him the third round and turning the Dalby fight into a draw, kept him out of action for all of 2016. Upon his return, Till looked fine, if a bit uninspiring -- his low-output pressure style was enough to earn wins over Jessin Ayari and Bojan Velickovic, but they were unimpressive affairs that seemingly showed how long Till had to go before becoming a welterweight contender. And then Till essentially hit the matchmaking lottery. The UFC needed a main event in Poland on a few weeks’ notice: Donald Cerrone, as always, was available, and the UFC surprisingly decided to give Till the other main event slot. And "The Gorilla" made good on an opportunity that, in retrospect, was tailor-made for his success; Till's pressure forced Cerrone to constantly back up, and even with the Brit's one shot at a time approach, he was able to hit the punches to put away Cerrone and earn a quick win. After that, Till lucked out with another excellent opportunity - now in Liverpool, Till was matched up against Stephen Thompson, and the knockout threat of each man essentially froze the other into inactivity. It was a terrible fight to watch, but Till earned the victory on the scorecards, and with that, he was now a top contender. But after getting the two best possible fights to move up the welterweight ladder, Till found it a lot harder to stay there - Tyron Woodley handled him easily in a title defense, and Jorge Masvidal's career resurrection started with a blitzing knockout of Till that left him looking at the lights. After that, Till announced his move up to 185 pounds, which seems like a better weight class for his approach, though the UFC once again gave him a tough style matchup in Gastelum. But due to a combination of a poor Gastelum performance and some smart game planning, the Scouser was able to intimidate Gastelum into inaction and turn things into the type of grind that he could win. Still just 27 years-old, there's the sense that Till's best days are ahead of him, as it feels like his game has yet to truly click; but with a win here, he could find himself in title contention in a second weight class before that even happens.

This should be Whittaker's fight to lose, so a lot of this hinges on what shape the former middleweight champ is in nowadays. His loss to Adesanya looks to have been purely thanks to the dynamics outside of the cage, but the last few years for Whittaker don't give off a warm and fuzzy feeling; there's the abuse suffered from 50 minutes in a cage with Romero, two career-threatening -- if not life-threatening -- injuries, and the admission from Whittaker himself that he pulled out of a fight in March due to burnout. But if Whittaker shows up anywhere near peak form, he should be able to win another war of attrition here. Whittaker mostly made his name in those wars with Romero, who chose to try and counter Whittaker straight on; it took a ton of heart and durability to do so, but as long as Whittaker was willing to wade through danger, he had the confidence that Romero would be there to get hit. Adesanya essentially cut that off at the pass; the current middleweight champion had the ability to dodge out of those exchanges, leaving Whittaker to eventually press harder and harder to get something done until Adesanya put him away. Till certainly fits more into the Romero category; he's a fairly straight-ahead fighter, and as long as Whittaker is both willing and able to keep pressing, he should both keep Till uncomfortable and cause a lot more damage than he absorbs. Till's ability to eat time in the clinch might be a concern, but in terms of effective offense, Whittaker should be able to start early and get rolling as the fight goes on. It might not be the prettiest fight, but the pick is for Whittaker to re-establish himself with a fourth round stoppage.

« Previous ‘Looma Lookboonmee’ vs. Jinh Yu Frey in the Works for UFC Event on Oct. 3 Next Khabib Nurmagomedov Pays Tribute to Father: ‘I Hope You Were Happy with Me’ »