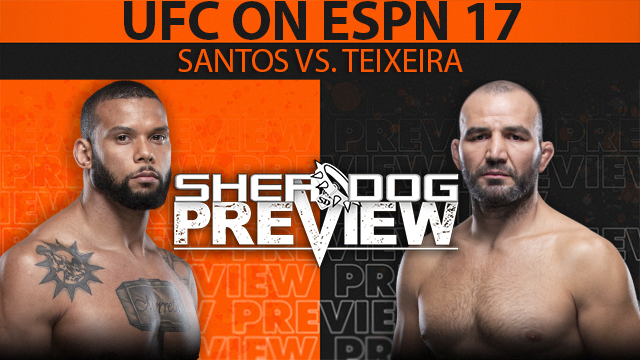 Despite losing two of its top three attractions on short notice, UFC Fight Night 182 on Saturday in Las Vegas seems to still have an unexpectedly strong main card by 2020 standards. The Thiago Santos-Glover Teixeira headliner could help determine the Ultimate Fighting Championship’s next No. 1 contender at 205 pounds—so long as Jan Blachowicz’s rumored champion-versus-champion title defense opposite middleweight boss Israel Adesanya fails to materialize—and everything else on the menu offers some sort of interesting angle. Tanner Boser has shown some intriguing improvements ahead of his heavyweight co-main event with Andrei Arlovski, and bantamweight Raoni Barcelos remains one of the organization’s most underrated talents. Mix in two other bouts with established veterans trying to hold off rising prospects, and this becomes a surprisingly tight five-fight affair.

Now to the preview for the UFC Fight Night “Santos vs. Teixeira” main card:

The UFC’s light heavyweight waters are a bit muddy at the moment, particularly after the announcement that Blachowicz will apparently defend his strap against Adesanya next. However, the winner of this matchup should be well-positioned in a post-Jon Jones world. Santos has been well established for a few years now, but it is worth revisiting exactly how unlikely his rise to light heavyweight contention has been. While he had success on the second season of “The Ultimate Fighter Brazil,” Santos came into the UFC as a raw middleweight prospect who was expected to wash out of the promotion in short order. Cezar Ferreira finished him in under a minute, and Santos would have likely found himself cut from the UFC had he not cashed in as a 6-to-1 underdog against Ronny Markes. That win over Markes—in which Santos showed off the brutal kicking game that has served as his trademark—was enough to give “Marreta” a foothold on the UFC roster, and he has made the best of that opportunity ever since. For the next few years, Santos was an exciting knockout artist who found himself on the fringes of the UFC’s Top 10 at 185 pounds. Even so, he never figured to crack into true contention, as bouts against the likes of Gegard Mousasi and David Branch saw Santos get quickly overwhelmed and finished. When a late-notice main event spot against Eryk Anders at light heavyweight became available, Santos decided to make the jump to 205 pounds and has not looked back since. It took Santos all of three fights to make it to top contender status in his new weight class. After separating Anders from his senses, Santos won a crazy brawl against Jimi Manuwa before dispatching the aforementioned Blachowicz, who was no match for the Brazilian once he decided to jump into action. Santos then gave Jones all he could handle, as the Brazilian presented a uniquely difficult challenge for the all-time greatest light heavyweight. Jones’ game nowadays is built on range and intimidation, neither of which was all that effective against Santos, a powerful kicker with a fearless mindset. In another universe, Santos is the man who unseated Jones, but instead, we are left with a major what-if. Santos suffered a major knee injury late in the first round, and while the Brazilian gutted out the rest of the fight, Jones walked away with a narrow split decision victory. Now, 16 months later, “Marreta” finally makes his return against Teixeira.

Teixeira was expected to move quickly on the UFC’s light heavyweight ladder upon his 2012 debut, and he lived up to those expectations, earning a title shot against Jones less than two years later. However, Teixeira’s next fight saw him drop a decision to Phil Davis in a flat performance, and he has not really been near title contention since—at least until now. Teixeira has somehow managed the odd trick of remaining relevant and not gaining much momentum, and his three-fight winning streak after the Davis fight is a perfect example of this anomaly. While wins over Ovince St. Preux, Patrick Cummins and Rashad Evans were all dominant victories in main or co-main events, they all read as referendums on his opponents rather than signs of a new and improved Teixeira. A rough stretch of three losses in five fights caused most to write off Teixeira for good. His lack of speed was a complete liability against Alexander Gustafsson, and Corey Anderson’s ability to continually beat the Brazilian to every move seemed like a sign that Teixeira could no longer hang with the rising new guard. Instead, Teixeira has spent the last two years climbing his way back to contender status. Teixeira would nearly always find himself in early trouble, but he would always manage to survive those early difficulties and find a way to win his fight. Against fellow former title challenger Anthony Smith in May, it was much the same deal. Smith could hurt Teixeira but could not put him away, at which point the Brazilian laid down an extended and brutal beating that cost “Lionheart” a few teeth. It was enough for everyone to realize that Teixeira, even at age 41, might be as relevant as he has ever been, and that only gets truer with a win against Santos.

This is a coinflip of a fight, but it also involves a simple dynamic. Either Santos authors a knockout in the opening moments of the fight, or Teixeira likely takes over and finds success from there. Teixeira is absolutely plodding at this point, and the first few minutes of his fights are nearly always trouble nowadays. However, for all the damage Teixeira has taken, Anthony Johnson remains the only man to put out the Brazilian cleanly with one strike. Santos—at least the version prior to his 2019 knee injury—is firmly in that tier when it comes to knockout power, so that could easily decide this fight within a minute. Otherwise, Teixeira has the type of style to give Santos issues. While he is not fast, he consistently moves forward to try and get to his wrestling game, and pressure has always resulted in Santos’ toughest fights. If opponents respect his power and stay cautious at range, Santos has the time and space to set up his brutal kicking game. However, when opponents have just accepted the fact that they are going to take damage, they have been able to get Santos moving backwards and take away his best weapons, with Mousasi and Branch finding quick victories shortly thereafter. Teixeira is certainly capable of following suit, assuming he can hold up to the damage that he is going to eat while closing in on Santos. The pick is for Teixeira to find a submission late in the first round.