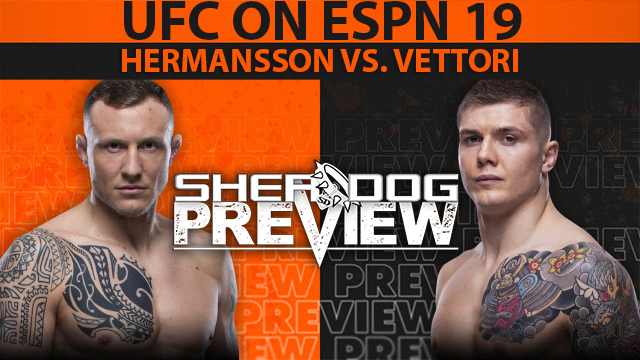 Even after the late shuffle to the UFC on ESPN 19 main event this Saturday in Las Vegas, the card still should provide a fun night of fights. On its own terms, the Jack Hermansson-Marvin Vettori headliner is an interesting affair for something put together on short notice. It is bolstered by two excellent next fights for top prospects, as Jamahal Hill gets a chance at a breakout win against Ovince St. Preux and Taila Santos draws a tough test against Montana De La Rosa. There may not be much in terms of sizzle, but this should be a solid appetizer to the next two weeks of much stronger shows.

Now to the preview for the UFC on ESPN 19 “Hermansson vs. Vettori” main card:

It has been an interesting road to middleweight prominence for Hermansson. “The Joker” was well-regarded heading into his UFC debut, where he looked good in a win over Scott Askham. A loss to Cezar Ferreira shortly thereafter seemed to put a clear ceiling on the Swede’s UFC run. Instead, Hermansson kept adjusting his game and racking up wins. After the Ferreira loss, he briefly became a ground-and-pound specialist in wins over Alex Nicholson and Bradley Scott, and his 2019 breakout win over David Branch saw him flash a surprisingly effective submission game. That victory over Branch set up a quick turnaround for a main event against Ronaldo Souza—a win that put Hermansson firmly in the title picture. Hermansson’s entire game clicked into place for a superb five-round performance that even saw him hold his own with Souza on the mat. Unfortunately, a subsequent loss to Jared Cannonier stopped that momentum and raised some concerns about Hermansson’s ability to hang with stronger athletes, given that he had similar issues with Thiago Santos a few years prior. With that said, Hermansson has stayed in the mix in the year-plus since thanks to a quick submission win over Kelvin Gastelum in July. That put him back in the main event picture here. Unfortunately, Hermansson has had to cycle through three different opponents, and it looks like things have landed on the worst risk-to-reward ratio of the bunch. Darren Till was an opportunity for a big-name win and Kevin Holland was an entertaining but beatable opponent, but Hermansson will instead wind up facing Vettori.

Watching Vettori develop and rise through the ranks has been a pleasure. “The Italian Dream” came into the UFC as an obvious but unproven talent, and he has slowly improved every time out. As is typical of a product of Rafael Cordeiro and Kings MMA, Vettori’s approach is all about channeling aggression, which he has in spades. There was some rough going early on, with Vettori winning only two of his first five UFC bouts. However, there was still promise. Vettori was at least showing the durability to get away with his aggressive approach, and opponents like Omari Akhmedov and Israel Adesanya are much more highly regarded now with the benefit of hindsight. Since the Adesanya loss—a narrow decision that still looms as a “what if”—Vettori seems to have finally turned the corner, laying one-sided beatings on Cezar Ferreira and Andrew Sanchez before showing off the entirety of his oeuvre in a quick win over Karl Roberson in June. Initially slated to face Souza at UFC 256, Vettori steps up on short notice to fight a week earlier and possibly earn his breakout win.

Again, this is a bit of a hard-luck situation for Hermansson. While this is a winnable fight, it is a difficult stylistic matchup that does not do much to boost Hermansson’s case for a title fight with a win. Hermansson can hold his own anywhere, but two things have traditionally given him difficulty: athletes and southpaws. Vettori is both. For whatever reason, Hermansson’s jab essentially disappears and makes him a much less effective striker against lefties. If that holds true here, then the Swede will likely have to rely on his wrestling, which is where it gets interesting. Powerful athletes like Santos and Cannonier were able to scare Hermansson away from a lot of his grappling tools through sheer size and strength, so it becomes a matter of where Vettori falls on that spectrum. He is not quite at that Santos-Cannonier level of powerhouse, so if that small downgrade in strength is enough for Hermansson to feel comfortable wrestling, there is a path to victory for “The Joker.” Get the jump early on his wrestling and hope that it is enough to tire out Vettori. However, if Hermansson is either reticent to get off to a hot start or quickly gets scared off trying to bully Vettori, the Italian should be able to take over handily in the early parts of the fight. That brings things to the main concern for Vettori, which is the fact this is a five-round fight on late notice. Given the pace at which the Italian fights, there is a decent shot that he will tire himself out come the championship rounds, even in a winning performance. This is a close call, but the bet is that Vettori’s defensive wrestling—which has looked decent in the past— can hold up early, at which point the outline of the fight favors him; and even if he flags after a hot start, he has proven durable enough that he can probably hold on for a win. To that end, the pick is Vettori via decision.