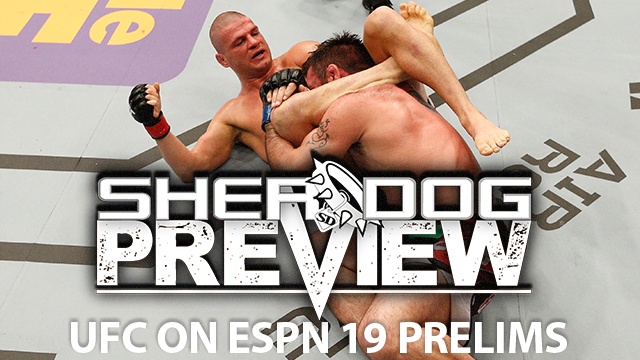 UFC on ESPN 19 this Saturday in Las Vegas offers up a sneaky-solid slate of prelims. After an impressive victory over Youssef Zalal, blue-chip prospect Ilia Topuria’s confrontation with veteran Damon Jackson looks to be the clear standout. Elsewhere, Jordan Leavitt gets a showcase opportunity against Matt Wiman, and Jimmy Flick gets an underrated test against Cody Durden. Throw in two other bouts involving veterans, and this should be an entertaining undercard.

Now to the preview for the UFC on ESPN 19 “Hermansson vs. Vettori” prelims:

It came as a surprise when Wiman returned to face Luis Pena in the middle of 2019. He had been out of action for over four years and was assumed to be retired. As a result, there was some intrigue about what the “Handsome” one could offer—he was a perfectly fine veteran by 2014 standards—but Wiman’s comeback has not gone particularly well. He did little else other than repeatedly escape and survive Pena’s aggressive grappling tactics, while Joe Solecki controlled “The Ultimate Fighter” Season 5 graduate and mauled him for 15 minutes without much of an issue. Frankly, it looks like the game has passed Wiman by to the point that he cannot be a viable gatekeeper on the UFC roster, so it is somewhat surprising to see him back in this position. Leavitt, like Wiman’s last two opponents, is an aggressive grappling specialist, so this should be a similar affair. There are concerns about Leavitt’s game, as he is extremely one-dimensional at this point. However, Wiman does not figure to make any of those concerns an issue, even if Leavitt might be less physically imposing than his last two opponents. Wiman could survive to see the scorecards, but the pick is Leavitt via second-round submission.