Five years ago, Kazuyuki Miyata was on track to become one of Japanese MMA’s biggest stars.


Advertisement
An Olympic wrestler with rare physical ability and media-friendly good looks, Miyata was the Japanese made-for-TV archetype. With just three months of mixed martial arts training under his belt, he signed a lucrative three-year deal with Japan’s top promoter, Fighting and Entertainment Group, to star in its then MMA series, K-1 Hero’s.

His inexperience showed in his early outings, as he lost as many fights as he won. However, the 2000 Olympian learned on the job, and his poster boy appeal helped him gain favor with casual Japanese television watchers.

“I was still a beginner, but I was facing top fighters because I had to, given the money I was being paid,” Miyata said. “It was tough. [FEG president Sadaharu] Tanigawa -- probably because of my physique and early performances -- had expectations that were too high for me.”

Norifumi “Kid” Yamamoto changed everything, as he knocked Miyata out with a flying knee four seconds into their fight at K-1 Hero’s 5. At the time, Yamamoto had 16 fights under his belt; Miyata had six.

“I’m confident striking in sparring now, but my heart hasn’t fully transitioned into striking during fights,” Miyata said. “Once I get hit, I start thinking striking is too much of a gamble, and I revert to ‘safe driving.’ I still have that fear of losing all memory like in the Kid loss. It’s become a part of me.”

A gifted wrestler, Miyata won regional- and national-level wrestling championships during his middle and high school years. Though these accolades theoretically ensured his path into higher education, it was not guaranteed.

“I almost didn’t graduate,” Miyata said with a chuckle. “We used to cut class and go to pachinko places instead.”

“
Once I get hit, I start
thinking striking is too
much of a gamble, and I
revert to ‘safe driving.’

His social circle included fellow standout fighters Michihiro Omigawa and Hayato “Mach” Sakurai, both of whom attended Tsuchiura Nichidai High School with Miyata. Despite academic disinterest, all three were deeply committed to extra-curricular activities: the judo club for Omigawa and Sakurai, the wrestling club for Miyata. Cutting class was justifiable, but missing practices was not.

While Omigawa’s future lay in judo and Sakurai’s in Shooto, Miyata -- with a little help -- graduated high school and entered one of Japan’s elite wrestling colleges, Nippon University.

“I owe a lot to [current FILA Japan head] Tomoaki Fukuda,” Miyata said. “At the time, Fukuda headed up Nippon University’s wrestling team and was looking to scout me. I graduated only because he interceded on my behalf so that I could wrestle for Nippon University.”

Miyata became a collegiate champion at 139 pounds in 1999 and represented Japan in freestyle wrestling at the 2000 Summer Olympics in Sydney, Australia. After placing 13th in Sydney, Miyata sought a place in the 2004 Olympics in Athens, Greece, but failed to qualify.

“I retired from wrestling after not making Athens,” he said. “By then, I was already working as a businessman in a publicly traded company. Japan was still in its ‘kakutogi boom,’ and I noticed that my friend, ‘Mach’ Sakurai, was competing successfully. Coincidentally, my university wrestling coach was also friends with Kazuyoshi Ishii of K-1.”

While most prospects in Japan work full-time while fighting, the media buzz around Miyata’s signing with K-1 forced him to resign from his office job at the behest of his company. It was a feasible move only because he was signed to K-1.

“The reason I started out in such a big show was that I had three kids and a wife,” he said. “I had to quit working at this major company to fight, so to make it worth the risk, I had to do it big.”

For a time, the gamble seemed to pay off. Miyata was covered by a handsome six-figure yearly salary on top of individual fight purses. All he had to do was train, fight and develop as one of K-1’s MMA stars. The crushing knockout loss to Yamamoto derailed those plans.

“I thought I could take him down and pound him out, but Kid’s strategy was better,” said Miyata, whose voice and expression grew distant at the memory. “He broke my jaw, and I couldn’t fight for half a year. That’s life, I guess. It was a huge chance for me. If I’d beaten him, I’d have become an even bigger star.”

In the years since, Miyata has surrounded himself with people to help him not only improve his skills but also overcome the shadow that loss has cast over him. Miyata’s striking coach, Sean Frew, believes the traumatic knockout has “taken two years of Miyata’s life” an also instilled in him hesitancy towards striking.

“He was caught cold,” Frew said. “It wasn’t a striking match at all, but, in his mind, he relates it to striking, and that’s why he’s thinking, ‘If I commit to a strike, I may miss, I may get countered and I may get knocked the [expletive] out again.’ I’m trying to teach him that it’s more dangerous if you just stand there and do nothing, waiting and wondering. That’s when you’re going to get hurt.”

Miyata yearns to reclaim his early career aggression and rid himself of his striking timidity. However, meeting those goals has proven difficult.

“Hero’s was getting to be very popular. When it ended, I was like, ‘Why?’” Miyata said. “I became a little less famous since then, actually. During Hero’s, I used to fight four times a year on primetime television. I get a lot of recognition among kakutogi fans now that I’m in Dream, but it’s not comparable to the Hero’s days.”

With less exposure, a lucrative starting contract expired and a pathological fear of striking, a 5-7 Miyata had difficulty staying relevant at lightweight. As such, Dream’s introduction of the 139-pound “featherweight” division in 2009 provided his break to make a run back towards becoming a contender. 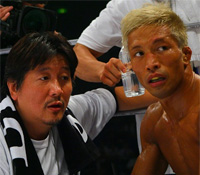 File Photo: Sherdog.com
Maeda (left) and Miyata.
Since the cut, Miyata has had a new lease on life, going unbeaten in his last four appearances. In addition, former Hero’s event supervisor and Rings founder Akira Maeda has begun mentoring him, cornering and training Miyata weekly and further bolstering his confidence.

Miyata is now certain he can make a significant run in Dream, but his eyes -- like many of his lighter weight peers-- have begun to shift abroad.

“The bantamweight division in the WEC is also tempting,” Miyata added. “I want to go there someday. I think the WEC is the top of the world for the lower weight divisions. In general, I want to someday fight in the U.S. again. They have very passionate fans and a strong wrestling culture. That would be an audience that would really appreciate things like my German suplex.”

To prepare for that day, Miyata has begun building a training environment more in line with current top facility standards.

“I’m planning now to open a mega gym near Tokyo,” he said. “It will probably be the biggest gym here. It’ll have a ring, a cage, mat space -- everything a fighter needs to get ready to fight anywhere in the world. It’s going to be in Misato, Saitama, just outside of Tokyo. It’ll be about 350 square meters, with two floors. It will also have a small dormitory to house fighters.”
Related Articles
Latest News
ALLUFCBELLATORPFLONE