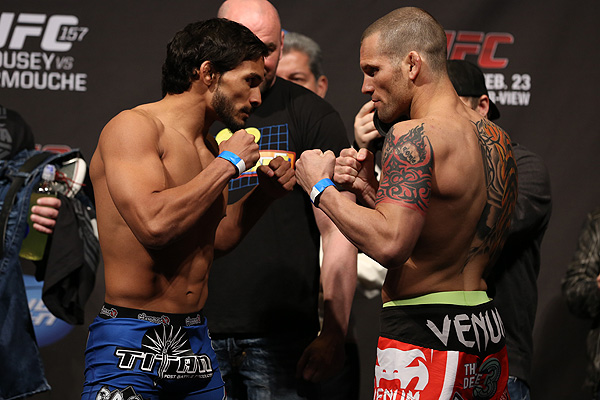 
A sprawling, hard blue Oklahoma sky served as a nice tableau for a Sunday outing. It was one of those days when the billowy white clouds seemed to radiate calm. They did for Caroline Grice. About the only obstacle she had was wading through the labyrinth of her daughters’ toys and the nagging questions that kept bounding inside her head: “Where is he? What’s taking him so long?” She hid her mounting agitation from the girls. She knew by now the fine line to walk, especially when her husband, Matt Grice, was in training mode for a fight. How cagey he could get as the date neared.

Anxiety grew. It was taking too long. This delay from the gym was a little unusual. Grice knew he had to be back at a certain time, so the family could visit his mother and enjoy the afternoon. Caroline even remembers expressing to the kids, “Damn, your dad is taking a long time. What is he doing?”

That is when the call came from his father. Out spilled five words no one wants to hear: “Matt was in an accident.” The words that followed -- “and he’s in pretty bad shape” -- were even more concerning. Phrases like that freeze you. They throw you into a surreal, spinning world where a different reality is happening, a reality that is hard to grasp; and just like that, a perfect Sunday is shattered, and the world Grice, Caroline and their daughters had would never be the same.

On Sunday, Sept. 8, 2013, Grice and some friends were sitting in a white Jeep Wrangler at a red light when they were plowed from behind by a driver going 65 miles per hour. The accident was near-fatal, reducing Grice, a man who thought of himself as invincible, to a man who was suddenly dependent on others to shuffle his feet and cut his food.

“Matt had two jobs; he would train for his fights, and he was a police officer in Oklahoma City, so he was a busy man and he had to go back to work that Sunday night,” Caroline said, “but before he did, we wanted to spend some time together with his family. I remember going into the girls’ bedroom, pacing back and forth, and I honestly used to leave Matt alone when he was training for a fight. Then I get this call telling me what happened. We live in a small town, and the calls started trickling in; and then you start to hear more details, like the car was completely smashed and they had to rip the Jeep apart to get Matt out before it blew up.

“I just panicked,” she added. “I remember putting the kids in the car and rushing to the hospital. I was in denial, and there are some things that you just don’t want to hear.”

How could Grice or his wife know then that such a catastrophic incident would evolve into something so enlightening? How could he know what happened to him, how he recovered, would change him so dramatically? He has come to believe in miracles.

All Grice needs to do is look in the mirror for verification -- and see Caroline and his girls, Harper and Finley, to know each breath he takes is a gift.

There must be something about Sundays with Grice.

A four-time Oklahoma state high school wrestling champion -- at the time, he was just the 13th four-time state champ in Oklahoma history -- and three-time Outstanding Wrestler of the state tournament (1998-2000), Grice was looking at a promising college wrestling career at the University of Oklahoma. Those plans, however, were altered, almost taken from him before they started. When he was 18, he was a passenger in a friend’s car traveling home down a gravel road one lazy Sunday afternoon, when his friend lost control of the car. It went careening into a telephone pole, throwing Grice through the windshield. He looked like he stepped out of a horror movie. His forehead caught the rearview mirror, tearing away flesh and creating a golf ball-sized divot in his head. The gash was so deep you could see Grice’s skull through the blood.

“The weird thing was the only thing that hurt in that accident was my right elbow,” he said. “I had to undergo five plastic surgeries to minimize the scarring just over my left eyebrow. I remember getting up from the accident, noticing all of the blood and wrapping a T-shirt around my head to stop the bleeding. We were about a mile from my friend’s house, and one of my friends wanted to see how badly I was hurt. I unwrapped the T-shirt, he looked at it, turned white as a ghost and took off running. I was fine. The main thing that kept hurting was my elbow. They put me a sling, and I began wrestling at Oklahoma my freshman year.”

Grice soon found out he had torn the ulnar collateral ligament in his right arm, which required numerous surgeries to repair.

“It was like one thing after another,” he said. “I took a medical redshirt in 2002, but I still wanted to compete. I needed time to rest my body. I told my family that I wanted to fight, but they forced me to make a promise that I wouldn’t fight until I graduated (he has a degree in sociology from Oklahoma). It bothers me a little bit that I didn’t compete in college. I loved wrestling, but after the accident, I always seemed to be hurt. It was my head, then the elbow, then I pulled my hamstring. I had to rest my body.”

Between repairing the gaping scar above his left eyebrow and the injured elbow, Grice underwent a total of nine surgeries. Still, he felt a compulsion to fight.

His body healed, Grice was an assistant coach at Harrah High School, his alma mater, during his senior year at Oklahoma. There, he became acquainted with Jason Merrell, who was coaching wrestling at nearby Shawnee High School. Merrell invited him to a grappling tournament in Redondo Beach, Calif., after about a week of MMA training. 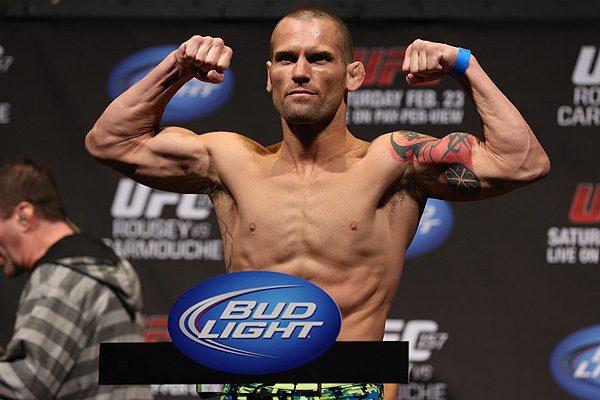 (+ Enlarge) | Photo: Dave Mandel/Sherdog.com
Grice had seven fights in the UFC.
“I fell in love with it right away,” Grice said. “I loved the submission part of it, and two weeks after that, I had my first MMA fight and I went from there.”

In April 2007, Grice debuted in the Ultimate Fighting Championship at UFC 70 “Nations Collide,” where he lost by submission to Terry Etim in Manchester, England. A year later, Grice, looking to create future stability beyond his fighting career, was hired by the Oklahoma City police force. By then, he was married to Caroline, and they had begun raising Harper.

“You do come to believe and feel that nothing can hurt you,” Grice said. “God looked out for me the first time we ran into the telephone pole. I fought two amateur fights and turned pro. Then I fought pretty regularly, and it worked out well. When I beat Dan Marks [in June 2006], that’s what helped me take off. [The] UFC noticed; and before I fought Etim I broke my hand, but I took my cast off. They had no idea I was in a cast just before that fight. I was so out of shape for Etim, and I was out of the country. My right hand was no good. I just got fatigued and I learned you can’t be in fighting shape without fighting; but I came back to beat Jason Black in UFC 77.”

Again, in July 2009, Grice was not exactly at his best when he fought and lost to Shannon Gugerty at UFC 100. He broke his wrist in training, though he was not about to say anything about it.

“Yep, I am hardheaded,” Grice said with a laugh. “I had surgery right after the Gugerty fight and surgeries to repair my wrist and a knee injury. I was getting ready to come back to [the] UFC at 145 pounds and found a nutritionist. I was training to fight Jeremy Larsen, when, on my way home, my life changed. The guy rear-ended me.”

Grice was 32 when the accident occurred. Life was about to take a dramatic turn.

Grice worked an overnight shift on Saturday, Sept, 7, 2013 into Sunday morning for the Oklahoma City police force, slept and woke up later on Sunday morning to train. He was wearing his seatbelt when Michael Monroe, driving a van, rammed Grice from behind. The impact jarred his brain in his skull, causing a subdural hemorrhage -- in layman’s terms, it was like severe shaken-baby syndrome, where the fluids in the brain cannot react fast enough to blunt force. He was immediately rushed to the hospital and emergency brain surgery was performed to induce a coma and address his swelling brain. Caroline and his parents were told he might not live through the night.

Finish Reading » At the Jim Thorpe Rehabilitation Center in Oklahoma City, Grice began making strides in October 2013. It took him a week to walk, and his memory returned in bits and pieces. It still bothers Grice today that he did not remember, that suddenly Superman, the action hero who could walk through walls, did not know his wife or daughters.