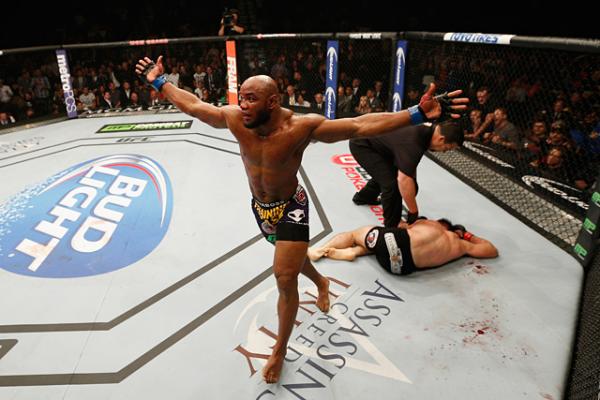 Yoel Romero appeared to catch an extended break prior to round three. | Photo: Josh Hedges/Zuffa/UFC/Getty


UFC 178 “Johnson vs. Cariaso” -- the Sherdog.com “Event of the Year” for 2014 -- had a little bit of everything with which to satiate the MMA world’s desires, from another successful title defense by a masterful champion and a back-and-forth barnburner between two of the sport’s premier lightweights to a brash Irishman’s continued pursuit of global domination and the controversy now known as “Stoolgate.”

Flyweight champion Demetrious Johnson was the centerpiece, as “Mighty Mouse” submitted Chris Cariaso with a second-round kimura to retain his 125-pound title in the headliner at the MGM Grand Garden Arena in Las Vegas. His face contorted by a combination of pain and hopelessness, Cariaso asked out of the cage 2:29 into round two.

“Mighty Mouse” nearly finished it in the closing seconds of round one, as he blasted Cariaso with an overhand right and followed it with a picture-perfect knee strike to the face. The challenger stumbled back to his corner, glassy-eyed and uncertain. He found no refuge in the second round. Johnson jumped into Cariaso’s guard after the challenger slipped, advanced to a mounted crucifix position and dropped elbows and punches. Moments later, he framed up the kimura for the tapout.

Alvarez had his moments, a first-round exchange in the clinch in which he tore into “Cowboy” with a burst of right hands chief among them. Cerrone withstood the onslaught and pushed him into the second round, where his investment in leg kicks and knees to the body paid dividends. The Jackson-Wink MMA export saved his best work for round three, as he chopped down Alvarez with repeated kicks to the leg. Cerrone drove the wounded Philadelphia native to the mat, settled in half guard and polished off the win with some effective ground-and-pound.

Meanwhile, former two-division Cage Warriors Fighting Championship titleholder Conor McGregor took out Dustin Poirier with a straight left behind the ear and follow-up punches in the first round of their featured featherweight encounter. Poirier, who had never before been finished by strikes, met his end 1:46 into round one.

McGregor backed up the Louisianan with a series of spinning attacks, stood him up with a clean right to the face and picked his spots from there. A straight left to the side of the ducking Poirier’s head dropped him to all fours and left him vulnerable to subsequent blows. Hammerfists and jackhammer lefts forced referee Herb Dean to intervene. A superstar in the making, McGregor, 26, will carry a 12-fight winning streak into his next appearance against Dennis Siver on Jan. 18 in Boston.

Controversy made an appearance during the middleweight clash between American Top Team’s Yoel Romero and Tim Kennedy, as the Cuban wrestler dismissed the American with a barrage of third-round punches. A battered, bloodied and exhausted Kennedy succumbed to the blows 58 seconds into round three, his four-fight winning streak a thing of the past.

Romero carved up the Jackson-Wink MMA representative with quick left hands through much of the first half of the fight. Kennedy turned the tide late in round two, where he had the 2000 Olympic silver medalist out on his feet after a pair of right uppercuts and a series of follow-up power punches. Only the bell saved him. Between rounds, Romero’s cornermen delayed their exit from the cage and allowed their fighter to remain on the stool well beyond the usual 60 seconds allotted for rest.

Kennedy walked into a buzzsaw in round three, where he was met with a savage right hand and collapsed. Romero dropped him a second time with a left hook before finishing it with swarming punches on the ground. It marked the first time Kennedy had been stopped since his professional debut in August 2001.

“Stoolgate” did nothing to overshadow Cat Zingano, as she kept her perfect professional record intact and took out Amanda Nunes with third-round ground-and-pound from the mount in a featured women’s bantamweight battle. Zingano -- who had overcome the death of her husband and a serious knee injury -- drew the curtain on the Brazilian 1:21 into round three.

Nunes emptied her gas tank in the first round, where she took down the former Ring of Fire champion and battered her with heavy, relentless ground-and-pound. Zingano weathered the assault and drew the MMA Masters export into deeper waters. Nunes had nothing left for rounds two and three. In the third, Zingano achieved full mount, opened a nasty gash on the side of the Brazilian’s head with a well-placed elbow and sealed it with unanswered blows from the top.

In another feel-good story, former bantamweight champion Dominick Cruz returned from close to a three-year-long layoff to stop Takeya Mizugaki on punches a little more than a minute into their undercard affair at 135 pounds. The end came 61 seconds into round one, with a dazed Mizugaki face down at the base of the cage.

Cruz darted in and out, popped the Japanese standout with a right hand and followed with an immediate takedown. Mizugaki attempted to scramble to his feet but left his head exposed in the process. Cruz exploded with ground-and-pound, a volley of vicious rights bringing it to a close. The 29-year-old Cruz, who had not fought since Oct. 1, 2011, has won 11 fights in a row.