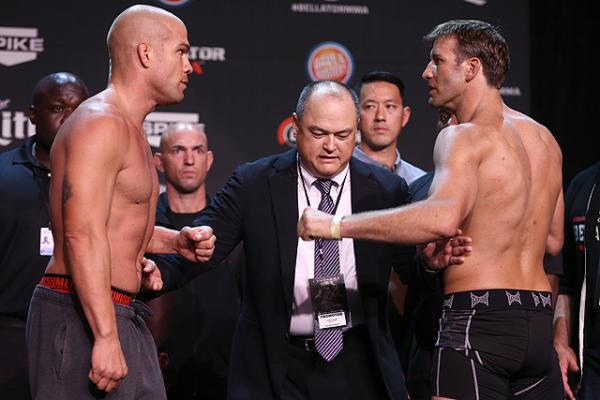 Before Bellator MMA’s first-ever pay-per-view event kicked off in May, Muhammed Lawal went rogue during an interview on the Spike TV portion of the broadcast: “I came out here to beat [Quinton] ‘Rampage’ [Jackson] and stop all the d--- riding Bjorn be doing.”

The interview ended promptly there due to some dubious technical issues, but “King Mo” had already articulated what many within the promotion had been feeling for a while: Bellator CEO and founder Bjorn Rebney was not the world’s most beloved boss. Some two months later, Rebney was gone, not necessarily ushered out by Lawal’s remarks but by a much grander scheme that had probably been in the works for quite some time.

“It is with bittersweet emotions that I announce that I am leaving the company I founded. I have great pride in having turned my vision into reality, a thriving business with television distribution to over 140 countries around the world, a partnership with one of the world’s largest entertainment giants and wide array of sponsors, partners and strategic allies all over the globe. This has been a wonderful eight-plus years of creation, development and success,” Rebney said. “I will miss the courageous, strong and dedicated fighters I have had the pleasure of promoting, and equally, I will miss the incredibly hard working, remarkable team that has become a family for me over the years.”

With that, Rebney disappeared -- perhaps to drown his sorrows in margaritas on a sun-drenched coastline somewhere in Mexico. The same day Rebney said goodbye, the long-rumored Scott Coker era officially began. If ever there was a person capable of turning Bellator into a feared competitor to the Ultimate Fighting Championship, it is Coker. After all, he had worked wonders in Strikeforce before the company was purchased by Zuffa and eventually laid to rest early in 2013.

Where UFC President Dana White once scoffed at the notion of women competing in the Octagon, Coker laid the groundwork for a judoka named Ronda Rousey to eventually become a superstar. While UFC brass found Fedor Emelianenko to be a stubborn adversary at the negotiating table, Coker struck a co-promotion compromise with M-1 Global and inked a deal for the mythical pound-for-pound king to compete under the Strikeforce banner. Numerous other talents -- Luke Rockhold, Tyron Woodley, Ronaldo Souza, Nick Diaz, Gina Carano and Daniel Cormier, to name a few -- thrived under Coker’s watch.

Warm and fuzzy feelings abounded with the announcement. Even White, who never made an effort to disguise his contempt for Rebney, gave his stamp of approval.

“Not only do I know Scott very well, I know the guys at Spike (TV) very well,” White said in an interview on AXS-TV’s “Inside MMA.” “I was in business with them for a long time, and I think this is a much better fit for them than ‘Bjork’ was.”

Apparently, absence does make the heart grow fonder. More importantly, Coker’s reputation within the MMA community resonated as he made a strong impression on Spike TV executives.

“Coker has great relationships with fighters,” Spike TV President Kevin Kay told Sports Illustrated. “They really respect him. He has great relationships with fight camps. Everybody wants to work with him. We went to the Glory pay-per-view together [the weekend after he’d been hired] and I just watched as every athletic commissioner, every other fight manager, every fighter that was there, came up to congratulate him on taking this job. Everyone seemed thrilled for him and thrilled for Spike to get into business with him … if you’re me, that’s what you want to hear.”

That reaction, along with the overall progress the promotion has made over the course of the past six months, makes Bellator’s hiring of Coker Sherdog.com’s “Story of the Year” for 2015. The impact was felt in the short-term, and its long-term significance could cement the promotion as more than a gnat buzzing around the Zuffa behemoth’s ears.

“It feels good to be back. I’m excited to team up with Spike and Viacom, who have played a very integral role in the success of mixed martial arts over the last decade,” Coker said during an introductory conference call. “I see a lot of potential in Bellator. I’m thrilled to have an opportunity to build a brand and take it to the level I think me and my team can.”

When it came to revealing what changes might be in store, Coker was slow to tip his hand. However, it was immediately clear that his arrival marked the end of Rebney’s brainchild, the so-called “Toughest Tournament in Sports.” One of the key components of Coker’s Bellator 2.0 was a trimmed down itinerary featuring 12 monthly shows and four larger scale-events instead of weekly offerings during a bi-annual season.

“As far as doing 26 fights and going on the road 10 weeks in a row, I just don’t think you can be an effective promoter,” Coker told Sherdog.com in August.

Fans got a small taste of Coker’s vision when Bellator went head-to-head against the UFC -- in the same state, no less -- on Sept. 5. The Bellator 123 card had a little something to satisfy everyone: Pat Curran-Patricio Freire for the MMA purist, Bobby Lashley for the crossover wrestling fan and Cheick Kongo-Lavar Johnson for the bloodthirsty.

What stood out most of all that night, however, was the bizarre way the promotion chose to unveil its next headlining bout: a light heavyweight showdown between Stephan Bonnar and Tito Ortiz. Criticize the sports entertainment rip-off if you will, but the in-cage shenanigans that ensued between Bonnar, Ortiz and a masked Justin McCully certainly got people talking. While featuring that trio did little to further Coker’s plan of going out into the field and developing new stars, the ex-Strikeforce leader never said he was averse to recruiting some familiar faces to build a brand.

“We are going to look at the roster, build a roster and start developing new talent,” Coker said. [That means] going out in the field and finding new guys and start looking for new stars. We might share some; we might buy some; we might build some. That’s been our motto in the past.”

If at this point skeptics still thought Coker’s arrival was simply a prelude to a Zuffa takeover -- he was at the helm when the same thing happened to Strikeforce, after all -- that notion all but disappeared with the aggressive strategy utilized to promote Bellator 131. In addition to the two UFC hall of famers at the top of the bill, Bellator enlisted ex-Octagon standouts Royce Gracie, Randy Couture and Frank Shamrock to appear at a pre-fight fan fest at Dave & Buster’s in San Diego. Wanderlei Silva was also initially scheduled to appear but ultimately bowed out due to existing contractual obligations with the UFC. That so many fighters who made their name in a rival organization would come out to sell a promotion for which they would never compete spoke volumes about Coker’s influence -- and Bellator’s plan of attack. Gracie, designated as Bellator brand ambassador, led the charge.

“I have known [Coker] for a long time and have always respected him as not only a promoter but as a martial artist who has always treated fighters with respect and truly understands their value,” Gracie said. “Bellator and Viacom want to give fans exciting fights and enable fighters to continue to grow and most importantly provide for their family, and it’s something I want to be a part of.

“UFC has done a great job over the past 20 years in building this sport and taking it globally, and I’m glad to have been part of that, but Bellator is a growing organization I am honored to be a part of,” he added, “and with the dedicated and talented people already associated with the company, we can further the growth of mixed martial arts as a sport worldwide.”

Bellator 131 on Nov. 15 went head-to-head with UFC 180, which marked the Las Vegas-based promotion’s initial foray into Mexico. Also on the agenda was World Series of Fighting 15 -- a distant third in the running for the public’s attention. When it came to the always-coveted buzz, Bellator won the day. UFC 180 was ravaged by the loss of Cain Velasquez, Diego Sanchez and others, and while pay-per-view numbers were not officially released, projections were not optimistic.

Bellator 131, meanwhile, was by most accounts, a hit. The Ortiz-Bonnar clash, while not a classic, attracted to Spike TV a mainstream audience weaned on Ortiz’s grave-digger routine and Bonnar’s epic brawl with Forrest Griffin. Before the headliner, viewers were treated to a pair of explosive knockouts courtesy of Mike Richman and Joe Schilling, while Will Brooks established himself as a star-in-the-making with his second consecutive triumph over Michael Chandler in a lightweight title bout.

Through it all, Coker’s fingerprints were everywhere. From the stage and ramp setup, to the video vignettes, to the fighter introductions, Bellator 131 felt like a big deal; and while there were plenty who gnashed their teeth at the thought of two past-their-prime veterans headlining Coker’s official coming-out party, that angst was not reflected in the final numbers. The card averaged 1.2 million viewers -- a record for a Bellator event on Spike -- and peaked at two million for the light heavyweight main event.

“Bellator 131 was an incredible event that had something for everybody, and I’m thrilled to see our efforts were so well-received by our fans,” Coker said. “I’m very proud of our entire Bellator and Spike family for all of the hard work they put [in] resulting in these record-breaking ratings. The most exciting thing for me is the knowledge that we are just getting started, and I can’t wait for everyone to see what we have in store for the future.”

Under Coker, the future of a new-look Bellator looks bright indeed.