Sherdog’s Event of the Year
By Jeff Sherwood

WEC 53 “Henderson vs. Pettis” -- Sherdog’s “Event of the Year for 2010” -- provided an amazing final chapter for World Extreme Cagefighting on Dec. 16 in Glendale, Ariz.

The city and site -- the Jobing.com Arena -- were determined by a fan voting contest, Amp Energy’s “Hometown Throwdown,” which was fitting for a product that, in recent years, had quickly become the hardcore fan’s obsession. Personally, I was especially excited, not only because it was another great WEC show but because I was there for the first-ever WEC event nine and a half years earlier.

On paper, it was a great card that introduced a bevy of questions. Will Brazilian prospects Renan “Barao” do Nascimento Mota Pegado and Yuri Alcantara continue to live up to the hype? Could Eddie Wineland and Brad Pickett continue their run of thrilling fights? How would Ivan Menjivar look at 135 pounds? Was Jamie Varner going to get back on the winning track and start another run to the top? Was Tie Quan Zhang going to continue to be the force behind Chinese MMA? Would a Donald Cerrone-Chris Horodecki matchup provide fireworks? How was Dominick Cruz going to handle Scott Jorgensen’s wrestling? How was 23-year-old Anthony Pettis going to fare in a main event that most felt he was going to lose?

Few fight cards offer that many intriguing storylines. Virtually none answer them with such thrilling competition.

It was hard not to feel initially dismayed, seeing pockets of empty seats inside the Jobing.com Arena. That is behavior more typical of Las Vegas events, where high rollers and celebrities wander in late. It was not fitting for a top-to-bottom fan-friendly card like WEC 53. Those ticketholders who did not show up for the opening bell received their just desserts: three knockouts, two submissions and two exciting decisions marked one of the most sensational undercards in recent memory.

It is impossible to understand how truly top-to-bottom great WEC 53 was without seeing the preliminary bouts. Wineland’s slam knockout of Ken Stone was as brutal as they come. To see the impact and consequence live was jarring and, frankly, terrifying, as Stone was motionless for 10 minutes. Danny Castillo and Alcantara both turned in highlight-reel stoppages. Against Chris Cariaso, “Barao” was so calm, methodical and technical in locking up his rear-naked choke. However, Shane Roller outdid him with his rugged choke-out of Varner in surprisingly quick fashion. 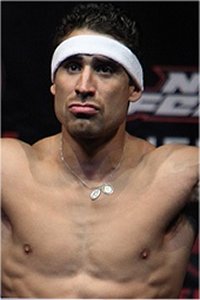 File Photo
Castillo stood out at WEC 53.
The two fights that went the distance on the undercard were fantastic. Daniel Downes’ comeback upset against Zhang showed you what kind of heart the kid had, and Menjivar-Pickett was 15 minutes of wild back-and-forth action. It was the kind of stuff that people came to expect from WEC.

However, the two title fights interested most people in WEC 53, and they delivered, albeit in different ways.

Many thought Jorgensen’s wrestling would give Cruz issues, but the champion moved and struck his way to a dominating performance over Jorgensen. Cruz won every single round behind his boxing and his wrestling.

Fans, writers and fighters all continue to discredit Cruz’s wrestling -- he did not wrestle past high school -- even though “The Dominator” puts better-credentialed wrestlers on the mat. Cruz did whatever he wanted against Jorgensen and continued to raise his stock and cement himself as the bantamweight division’s star champion.

More importantly, Cruz’s win set up a potential rematch with Urijah Faber in 2011 -- a fight that could prove the biggest in bantamweight history. Part of what made his domination of Jorgensen special was wondering how he could stack up with “The California Kid” four years after their first encounter.

Then, in the final WEC fight ever, Pettis and Benson Henderson put on something truly special.

Henderson, an Arizona-based fighter, came out to one of the loudest ovations in recent memory. The air was thick with pressure and excitement, as fans were standing before the main event even began. The action that followed ensured they would not return to their seats.

After 20 minutes of back-and-forth action -- including one of the year’s best rounds, the seesaw fourth -- most onlookers had the bout two rounds apiece, 38-38, giving the first and fourth to Henderson and the second and third to Pettis. More importantly, two of the judges -- Derek Zazueta and Tom Gabauer -- had the fight scored that way, meaning it was up for grabs going into the last round of WEC action ever.

With 90 seconds to go, the fight was there for the taking, waiting for one fighter to seize the moment. That is exactly what Pettis did, snatching victory in once-in-a-lifetime fashion, leaping off of the fence like a scene out of “The Matrix” and smashing Henderson with a flying kick to the head. The mind-blowing last-minute offense sealed the fight for Pettis, who took a unanimous decision and the WEC lightweight title.

No matter what happened in the final frame, or the four rounds before it, it is hard to remember anything other than what has become known as “The Kick.”

Pettis already enjoyed some celebrity before the fight due to his appearance on MTV’s “World of Jenks,” which profiled him prior to his March bout with Danny Castillo. However, “The Kick” took it to another level. The highlight was plastered all over ESPN and other sports outlets and drew massive praise from the sports world, including the likes of Jim Rome. The moment came in at No. 8 on ESPN Sportscenter’s “Plays of the Year.”

Prior to WEC 53, I watched a journalist interview both Henderson and Pettis. They asked Henderson about how he felt he would match up with the UFC’s lightweights after the UFC-WEC merger but declined to ask Pettis the same question. It was a slight that was widespread before the bout, as not many gave Pettis a chance against Henderson, and virtually no one thought he had any serious place among the UFC’s top 155-pounders.

Then, in one instant, Pettis delivered one of the most exciting moments in MMA history and broke out as an incomparably dynamic, emerging star. In 2011, he will fight for the UFC lightweight title, but it is hard to imagine, regardless of what greatness may await him, that any moment will overshadow what he created in the last minute of the last fight of the last WEC show ever.

On entertainment value alone, top to bottom, WEC 53 ranks among the best events of the year. It had high-level action and highlight-reel stoppages, in addition to a “Fight of the Year” candidate in the main event with a where-were-you-when moment in its conclusion. However, it was not just exciting; it was symbolic and sentimental. WEC 53 was not just excitement for excitement’s sake. It was the final thrilling chapter to a book that could not have ended any more fittingly.