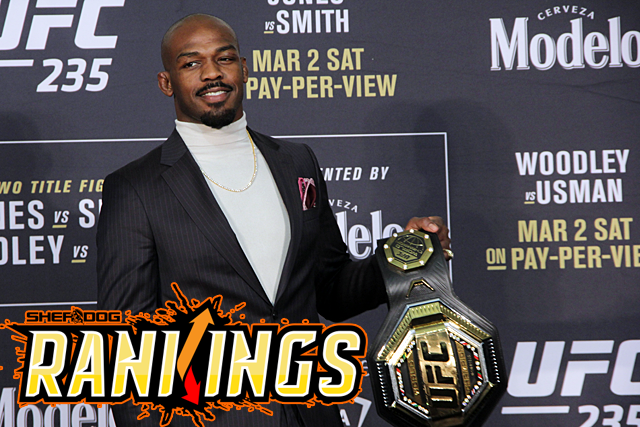 It was a slow death for Anthony Smith against Jon Jones at UFC 235, something akin to watching a boa constrictor devour a mouse. In short, it wasn’t enthralling, but the outcome was inevitable.

It was no surprise to see Jones maintain his stranglehold on the top spot in the light heavyweight division, and the Jackson-Wink MMA standout looks on pace to achieve his goal of an active 2019. There is no clear-cut No. 1 contender at 205 pounds, but Thiago Santos, Dominick Reyes and even Johnny Walker all loom as interesting challenges down the road. Walker makes his debut on the light heavyweight bubble following a 36-second knockout of Misha Cirkunov -- the Brazilian’s third consecutive first-round stoppage -- in a UFC 235 preliminary bout.

While it was business as usual for Jones, UFC 235 resulted in some upheaval in other divisional polls. Kamaru Usman dominated Tyron Woodley from bell to bell, claiming the welterweight title and the top spot at 170 pounds with his 10th consecutive victory. Ex-champ Cody Garbrandt, once a pound-for-pound contender, falls all the way to the bantamweight bubble following his third consecutive KO/TKO defeat. Pedro Munhoz, the man who vanquished him, climbs to No. 8 at 135 pounds.

A couple others who made their marks at UFC 235 include Zabit Magomedsharipov, who joins the featherweight poll at eighth after vanquishing the always-tough Jeremy Stephens, while Weili Zhang enters the strawweight rankings at No. 7 after sending Tecia Torres to her third consecutive defeat. And of course, there’s Ben Askren, who re-enters the welterweight rankings following a lengthy hiatus at No. 5; his vanquished foe, Robbie Lawler drops only one spot to sixth due to the controversial nature of his defeat.