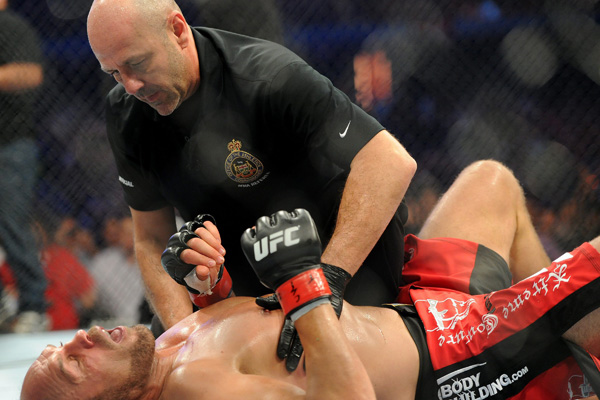 
Nothing stirs the masses quite like the knockout, an event in which skill, technique, speed, timing and brute force all converge in magnificent concert.

Fists, feet, shins, elbows and knees have all been utilized in bringing about unconsciousness in mixed martial arts. The best of them remain seared in our collective memory bank, forever linked to those who authored them and the unfortunate souls who were on the receiving end their brutality: Quinton “Rampage” Jackson’s power bomb slam on Ricardo Arona at Pride Fighting Championships “Critical Countdown 2004,” Dan Henderson’s one-punch wipeout on Michael Bisping at UFC 100, Pete Williams’ savage face kick on Mark Coleman at UFC 17 and David “Tank” Abbott’s nightmarish stoppage on John Matua at UFC 6, to name but a few.

There was no shortage of highlight-worthy knockouts in 2011. In conjunction with the launch of its site redesign, Sherdog.com has compiled a list of the 10 best from the year that was.

One graceful, devastating blow did the deed, a single strike as visually arresting as it was meaningful for the fighters on either end of it. In a blink, Machida breathed new life into his own career and kicked closed the cage door on a departing icon, at the same time ensuring the appearance of both men on highlight reels for years to come. That “The Dragon” defeated Couture at UFC 129 was no great surprise -- the Brazilian entered the fight a 3-to-1 bookmaker’s favorite -- yet the manner in which he won could hardly have been more stunning. A front kick brought the fight to a sudden halt 65 seconds into the second round, sending Couture into retirement and Machida to a light heavyweight title bout.