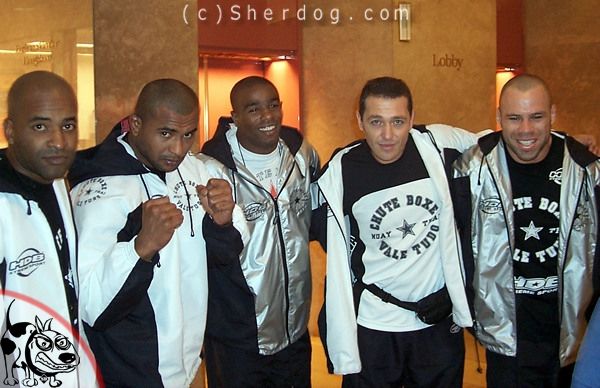 
The clinch in mixed martial arts is not simply a waypoint between wrestling and striking but a distinct phase of its own with unique characteristics. Fights are won and lost in the tie-ups, and some of the greatest fighters in the sport’s history have made it their home.

The most compelling thing about the clinch in MMA is that it offers an opportunity for the integration of the different component arts that make up the sport. Wrestling -- folkstyle, freestyle and especially Greco-Roman -- offers a substantial array of techniques, from hip tosses to lateral drops to high-amplitude throws. Judo, an increasingly important base for many fighters, is essentially based around the clinch. Muay Thai, especially as practiced in Thailand, focuses exceptional amounts of attention on inside fighting, since that is where knees and elbows -- the highest-scoring techniques under traditional rules -- can be landed. If you go to a fight in Thailand, you will surely note that the crowd cheers loudest for strikes landed at close range. Even the most venerable of western striking arts, boxing, once offered a diverse array of options for landing damaging offense in the clinch: Many great fighters of the late 19th and early 20th centuries, like Bob Fitzsimmons, Jack Johnson and Jack Dempsey, did some of their best work in the tie-ups. Modern pugilism has evolved away from that state of affairs, but it is common to watch a very old boxing match and note the use of the same techniques that Daniel Cormier used against Jon Jones at UFC 182.

The clinch in MMA is a synthesis of techniques from a number of different sources, but the whole is worth much more than the sum of its parts. The latest installment in the Sherdog Top 10 series focuses on those who have managed to master the complexity and nuance of the clinch, the sport’s greatest practitioners of fighting on the inside. We weighed takedowns (throws and trips), inside striking (punches, knees, elbows and throwing on breaks), control and the quality of opposition against whom the competitors were able to establish their clinch games. We are not speaking here of wrestling per se, nor muay Thai, nor Judo, but the command of the spicy mélange of clinch skills that makes MMA unique among combat sports.

Number 10 » The two-time Olympian in Greco-Roman wrestling was one of the first fighters to underscore the effectiveness of dirty boxing -- pinning the opponent against the cage and working him over with knees and punches -- in mixed martial arts. He owns one of the most vicious right hands in the history of the sport, and over the course of his 17-year career, he has put it to exceptional use in close quarters.