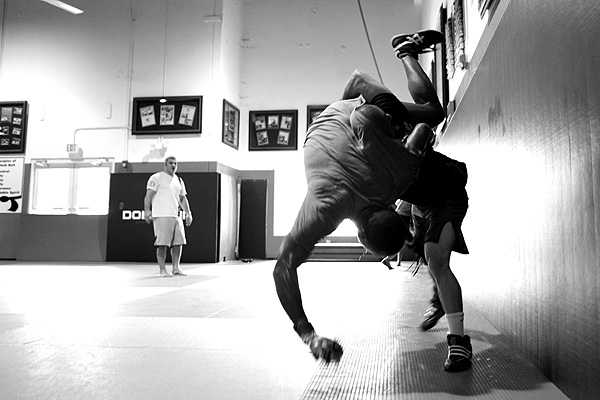 Wrestling is the only completely indispensable skill set in MMA. You can get away without much of a striking game or slick skills as a grappler, but show some cracks in your takedown defense and everything else comes crashing down. Even the most talented guard players can be held down and controlled by a talented wrestler, and the most devastating range striker has little to offer when pinned against the fence in the clinch. Wrestling dictates where the fight takes place, and as hackneyed as that phrase might be, it is essential to remember it.

With Georges St. Pierre’s retirement looking more and more permanent, the question of who currently has the best wrestling in MMA becomes pertinent once again. Despite his lack of credentials, GSP’s wrestling game was the most effective in the sport, utilizing his athleticism, timing and ability to disguise his shots in transition to take down national champions with shocking ease.

The latest installment in the Sherdog Top 10 series examines precisely that question. We put the focus on in-cage wrestling in lieu of credentials at the collegiate or international level, allowing the functional skills that are specific to MMA to come to the fore. These include variety and effectiveness of takedowns, caliber of opposition, takedown defense and wrestling-specific mat work, with extra points awarded for well-roundedness.

Continue Reading: Number 10 » A four-time NCAA Division I national qualifier at Clarion University, he carried over his high-energy style from the wrestling mats to the cage. In fact, he is a sterling example of how an approach that was limited at the highest levels in wrestling can become much more successful in an MMA context.
« Previous Sherdog’s Top 10: Training Camps Next Sherdog’s Top 10: Trash Talkers »