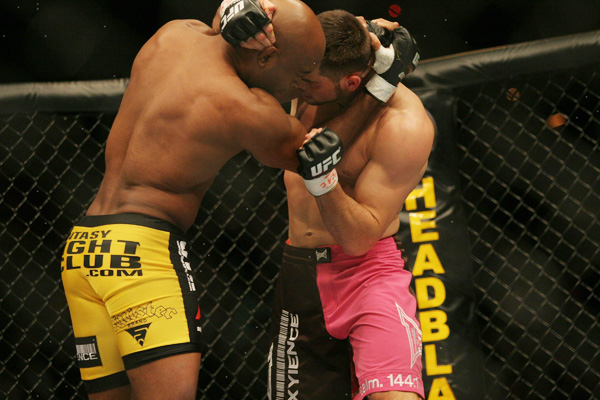 
Ask most any mixed martial artist these days about his greatest strength and you are likely to get a stock answer regarding a “well-rounded” skill set. Wrestlers, boxers and jiu-jitsu specialists train side by side on a daily basis to gain knowledge and experience. None of the cool kids are interested in specialization anymore.

The continuing evolution of MMA is a boon to the sport, and it practically guarantees competitive fights between opponents who are well-versed in all aspects of their craft. Rare is the athlete who can truly excel in one area, however, and even rarer still is the fighter who has mastered something so well that it can turn the tide of a fight without fail, even if a foe knows it is coming.

Think Dan Henderson with his right hand cocked, ready to unleash his great equalizer at a moment’s notice; or Anderson Silva relentlessly hammering an adversary with knees as he is trapped in “The Spider’s” deadly Thai plum; or maybe it is something more intangible, like Frankie Edgar rallying back from certain defeat to achieve yet another unlikely victory. These are the types of weapons that every fighter strives to attain but only a few actually possess. Henderson’s right hand, Silva’s Thai plum and Edgar’s resolve are just three of the Top 10 most dangerous weapons in MMA today, as selected by Sherdog.com’s editorial staff. Of course, no Top 10 list would be complete without argument, so let the debate begin.

It almost does the UFC middleweight champion a disservice to limit him to just one weapon because, in reality, the entire striking arsenal of “The Spider” is formidable. However, specificity is the goal.

Silva has released a book explaining his effective use of the muay Thai clinch, but one need look no further than his second Octagon appearance in 2006 to truly appreciate the effectiveness of his Thai plum. At the time, Rich Franklin was one of the promotion’s most respected champions, a former school teacher who brought an eight-fight winning streak into UFC 64.

Once Silva was able to lock his hands behind his opponent’s head, with his forearms tight against Franklin’s neck, it was quickly apparent that the reign of “Ace” was about to come to an end. In complete control, Silva landed knees to the body and face with precision and fury. Franklin, thoroughly helpless in the clutches of The Spider, was finished before the opening frame expired. A rematch came less than a year later in Franklin’s hometown of Cincinnati at UFC 77, and there was little question that he had spent time preparing for Silva’s vicious clinch game. It proved to be all for naught, however, as a knee from the Brazilian ended his night again, this time in the second round.

Over the years, Silva has demonstrated many spectacular elements of his striking, such as the front kick that felled Vitor Belfort at UFC 126, but there is little doubt that the Thai plum is the foundation of his dominance.