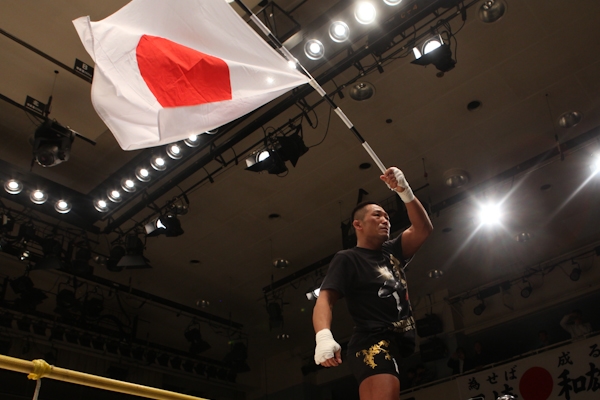 Sherdog.com
Herring was not a willing participant in “The Kiss.”
New Year’s Eve is a time for celebration, recollection and a chance for a fresh start. The fortunate -- save for Heath Herring -- might receive a kiss from a loved one when the clock strikes midnight. For fight fans, New Year’s Eve has been as much about entertaining and often-bizarre violence as it is about streamers, champagne and ball-dropping festivities. If you are serious about MMA, odds are you have probably welcomed the New Year with 40,000 or so of your closest friends in Japan, if only from a distance.

Although the MMA scene in Japan is nowhere near what it once was, fun and freaky fights on Dec. 31 remain a time-honored tradition in the Far East. This year, Dream 18 heads to the Saitama Super Arena in Saitama, Japan, with another interesting collection of bouts, headlined by a lightweight clash between Shinya Aoki and Antonio McKee. Fighters like Tatsuya Kawajiri, Bibiano Fernandes, Michihiro Omigawa, Phil Baroni, and Melvin Manhoef are also scheduled to appear. Is there any better way to forget all acquaintance than by punching your fellow man in the face at the end of the year?

In honor of MMA’s rich New Year’s Eve history, a panel of Sherdog.com staff voted on and selected the Top 10 New Year’s Eve fights of all-time. So take a moment, as we all tend to do this time of year, to sit back and reminisce about fights of New Year’s Eve past:

Yes, we know it is not actually a “fight” per se. In fact, it might be the most watched and fabled no contest in MMA history. When Nakao took on former Pride Fighting Championships heavyweight title challenger Herring at K-1 “Dynamite!!” on New Year’s Eve in 2005, he was an unbeaten-but-unremarkable wrestler and hardly noteworthy. This changed forever during the pre-fight staredown, as Nakao inexplicably decided to mock the colorful cowboy from Texas by kissing him on the lips.

After the smooch, there was a Matrix time-type moment where Nakao smugly smirked in Herring’s face. This ended abruptly when Herring suddenly cocked back and leveled Nakao with a right hook that sent the Japanese fighter’s head in a concussive spiral. Nakao hit the mat, unconscious and stiff as a board, and had to be stretchered from the ring. While he lay supine, Herring infamously defended his actions to K-1 officials: “He tried to kiss me on the lips like a homosexual. I’m not gay? I’m not gay!?”

Herring was initially disqualified in the bout, but after sober reflection, K-1 parent company Fight Entertainment Group decided that both Nakao’s kiss and Herring’s sucker shot were fouls; plus, the bout had not formally started. That notwithstanding, the shocking absurdity of the scene became an instant viral sensation. Thanks to YouTube and the Break.coms of the world, Nakao-Herring is probably one of the most watched MMA “fights” ever. Nakao even adopted “Kiss” as his nickname and has spent the last seven years milking the fact that he got clobbered for obnoxiously kissing an opposing athlete.

Basically, Nakao-Herring is the stuff of which New Year’s Eve in Japan is made.