Mirko “Cro Cop” Filipovic will go down as one of the sport’s greatest heavyweights. | Photo: Sherdog.com


As Mirko “Cro Cop” Filipovic’s storied career winds to its conclusion, he has no shortage of highs and lows to reflect upon. There are fighters who have accomplished more in mixed martial arts, but very few have embarked on such a varied and unique journey. From top-level kickboxing and novelty MMA competition to the highest levels of Pride Fighting Championships and the UFC, Cro Cop has seen all the sport of MMA has to offer while fighting on four different continents.

In advance of what could be Cro Cop’s final MMA bout -- a featured matchup with “The Ultimate Fighter” Season 10 winner Roy Nelson at UFC 137 on Saturday at the Mandalay Bay Events Center in Las Vegas -- here is a look back at the moments that defined the Croat’s career, for better and for worse.

When Cro Cop began his transition from K-1 to MMA competition, he was matched primarily with fighters who had ties to Japanese professional wrestling. It quickly earned him the moniker “Pro Wrestling Hunter” and led to a bout with Yuji Nagata on New Year’s Eve 2001.

At the time, Nagata was being groomed to hold Japan’s most prestigious pro wrestling championship -- the IWGP heavyweight title. Japanese pro wrestling icon Antonio Inoki promoted the Nagata-Cro Cop bout, and the idea was Nagata would represent Japanese pro wrestling against other fighting disciplines, just as Inoki once had against the likes of Muhammad Ali, Willem Ruska and Shota Chochishvili. Nagata had competed in amateur wrestling at the international level, and the thought was he could take down Cro Cop repeatedly and secure a win to enhance his credibility as a wrestler.

That plan backfired spectacularly. Cro Cop brushed off Nagata’s first takedown attempt and fired off his infamous left high kick to floor him. He followed with punches on the ground, and the fight was stopped in just 21 seconds. Nagata was humiliated in his first MMA bout, while Cro Cop had further established himself as something more than just another one-dimensional kickboxer.

Cro Cop’s win over Nagata symbolized a significant shift in the Japanese combat sports landscape. Pro wrestling was on the severe decline, and MMA on the ascent. Inoki and Nagata picked the wrong opponent for their plans. Cro Cop was just getting started in MMA.

Only four fights into his MMA career, Cro Cop found himself in the main event of one of the most significant events of all-time -- a show that combined kickboxing, Brazilian jiu-jitsu and MMA. On a card that also featured marquee Bob Sapp-Antonio Rodrigo Nogueira and Royce Gracie-Hidehiko Yoshida matchups, Cro Cop’s showdown with Kazushi Sakuraba went on last.

The beloved Sakuraba was coming off his second loss to Wanderlei Silva, and the hope was once again that he could ground and submit the kickboxer. Cro Cop foiled those plans, breaking Sakuraba’s orbital bone and winning the bout by technical knockout. The mood was far from despondent, as the event drew more than 70,000 people and set a record for worldwide MMA attendance that stands to this day.

With Cro Cop drawing so well, Pride saw the dollar signs and moved to bring him into the MMA fold permanently. Cro Cop fought only once more under kickboxing rules, a high-reward bout against Sapp the following April. Cro Cop was soon after exclusive to Pride. 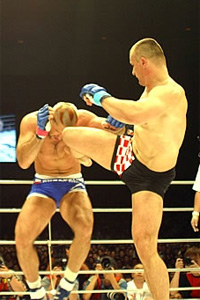 Jeff Sherwood
Herring was victimized in 2003.
Already feared for his devastating head kicks, Cro Cop demonstrated another dangerous weapon in his arsenal against Heath Herring at Pride 26.

Herring was at the time regarded as one of the world’s top heavyweights, coming off high-profile bouts with Nogueira and Fedor Emelianenko. “The Texas Crazy Horse” also had Cro Cop scouted well. He charged in and out quickly, so as not to give Cro Cop opportunity to time his strikes. Herring’s hands remained very high, ready to defend against his foe’s lethal high kicks.

The problem was Herring could not secure a takedown. Diving in with increasingly desperate attempts, Herring failed to get the fight to the ground, and Cro Cop began to connect more and more. Then, three minutes into the bout, Cro Cop threw a left body kick that snuck its way under Herring’s arm and right onto his ribs. It took a moment for Herring’s mind to register the blow. He took a few steps back and then simply collapsed. Cro Cop pounced with strikes and finished the former heavyweight title challenger.

The win over Herring established to Cro Cop’s future opponents that they could not simply defend against high attacks. He could mount crippling precision offense to the body, as well. Of course, defending the body opens up the head, leaving a very undesirable set of choices for fighters forced to stand with the surging Croatian.

In the early days of Pride, one heavyweight striker stood out above the others. With wins over the likes of Sakuraba, Mark Kerr and Gilbert Yvel, the compact Ukrainian Igor Vovchanchyn was a feared force. His knockout of Francisco Bueno at Pride 8 was a staple of the promotion’s early highlight reels.

By 2003, Vovchanchyn’s star had fallen with losses to more well-rounded opponents. However, Vovchanchyn’s downfall was inevitably his ground game. Opponents won by taking him to the mat. The standup was still Vovchanchyn’s domain, and few were interested in engaging him there.

That changed with Cro Cop’s entrance into Pride. Cro Cop had dealt with strikers above Vovchanchyn’s level in K-1 and was ready to establish himself as the new heavyweight alpha striker. Eighty-nine seconds into the Cro Cop-Vovchanchyn bout at Total Elimination 2003, Vovchanchyn was just another head kick victim. As Vovchanchyn lay unconscious, the Pride heavyweight division was on notice that the striking standard had just been raised. Vovchanchyn retired just two years later, a few weeks after his 32nd birthday.

An undefeated Cro Cop entered his Pride interim heavyweight title bout against Nogueira at Final Conflict 2003 with swagger. Confident in his takedown defense and his striking, Cro Cop seemed a difficult matchup for the Brazilian Top Team star.

For the entirety of the 10-minute first round, Cro Cop battered and punished Nogueira with strikes. Blocking Nogueira’s takedowns and dominating the standup, Cro Cop seemed like too much for the Brazilian to handle. Unfortunately for Cro Cop, he was fighting a man who built his reputation through overcoming adversity. Early in the second round, Nogueira was finally able to get Cro Cop to the mat, and he quickly transitioned to an armbar. Cro Cop tapped out, and the audience at the Tokyo Dome erupted in celebration.

It was perhaps the most impressive come-from-behind victory in the history of MMA, and remains one of the defining moments of Nogueira’s stellar career. Cro Cop thoroughly dominated the fight with his striking and takedown defense, but Nogueira proved once again that he only needs a brief opening to finish a fight with his jiu-jitsu.