Managers and agents are fast becoming an endangered species backstage at UFC and WEC events.

Zuffa, the company that owns and operates both promotions, has notified select fighter representatives that they will no longer receive credentials from the promotion to sit with their clients backstage on fight night.

The reasoning behind the UFC’s decision varies according to the source. Some say the move is yet another strike in a campaign to separate fighters from their business representatives. Others say Zuffa is making a reasonable attempt to control unnecessary backstage traffic and lighten overcrowded dressing rooms of freeloaders.

The latter explanation loses traction, however, when the promotion has not enacted a blanket policy across the board, which brings into question if the move is more personal than procedural.

Of five separate fighter representatives and their firms that spoke to Sherdog.com, two said they were told that credentials would no longer be doled out to them shortly after UFC 94 on Jan. 31. These firms were also denied backstage access in person at UFC Fight Night 17, UFC 95 and UFC 96, as well as WEC 39, which took place March 1 in Corpus Christi, Texas.

Both reps said Zuffa would give no reason for the change in policy when asked over the phone and in person.

“You don’t ask questions of them. You know how that goes,” said one manager, who, like multiple fighter representatives interviewed, would only speak on the condition of anonymity for fear of repercussions.

Zuffa’s public relations department did not respond to an e-mail requesting comment on the promotion’s sudden shift in policy after eight years.

Outraged managers and agents said the silent treatment speaks to a greater issue that Zuffa is trying to keep hidden behind closed locker room doors.

“They’re divisively trying to split management and fighters,” said one representative. “They’re trying to de-power the managers and agents to create a wedge between them. They give locker room bonuses and say, ‘This is from Dana [White] and the UFC -- nobody else.’ They’re telling fighters they can go directly to them. They’re telling fighters they’ll be doing sponsorships themselves in the near future that will put the managers and agents out of business. They’re trying to minimize the managers’ and agents’ role in the fighter’s life so they can better control salaries.”

If these allegations hold validity, how would a promotion be allowed to prevent a fighter from protecting his business interests no matter where he is?

In both boxing and MMA, a majority of statutes allow athletic commissions to license managers and agents, which essentially gives these representatives the right to handle the fighter’s earnings. However, the promotions have the discretion to assign walk-around credentials to managers, agents and other parties not affiliated with the regulatory body, something promotions have done with little fuss over the years -- until now. 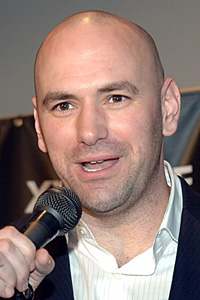 Photo by Sherdog.com
Dana White was an
MMA manager himself.
Many representatives speculated the order came from UFC President Dana White, himself a former manager who once worked with Chuck Liddell and Tito Ortiz.

All three regulatory bodies said managers and agents are welcome to apply for one of the three commission-issued credentials allotted to licensed seconds or cornermen.

“If the manager is one of the three seconds, he may be at ringside. If he is not, it is at the promoter’s discretion who gets credentials,” wrote Tennessee’s newly appointed Executive Director Jeff Mullen, who judged nearly 50 UFC events. “I can only ask for credentials for someone who is on official commission business.”

“We will not be involved with the issuance of credentials outside of our scope,” replied Douglas in an e-mail to Sherdog.com on Monday.

If Zuffa won’t credential certain individuals backstage as managers, then why not just apply for a second’s license?

Agent Ken Pavia, who has 55 athletes on his roster, said a cornerman is a crucial role that most managers or agents leave up to the pros.

“With the multiplicity of disciplines the fighters must be schooled in, their striking coach, their ground coach are needed in the corner,” said Pavia, who was among those denied. “Their training partner is in the locker room with them, helping them warm up, to break a sweat, to grapple, to pummel, whatever. Often, a full-service fighter will have all three in his corner, which pushes the manager or agent out.”

Monte Cox, who manages 60 fighters and once simultaneously guided the careers of three UFC champions, believes managers must pick their battles.