With former middleweight champion Cung Le back in the fold and plenty of quality co-headliners on the docket, Strikeforce “Evolution” has been stacked top to bottom with fights that will have a shockwave effect on the promotion in 2010.

It airs live on Showtime this Saturday at the HP Pavilion in San Jose, Calif., so mixed martial arts fans have no excuse not to continue their December binge.

The Breakdown: Thankfully free from his obligations to the migraine-inducing world of kung fu movies, Le returns to Strikeforce as the prodigal son who must now face the first legitimate challenge of his career. Smith has already distinguished him from the caliber of competition Le has been spoon-fed thus far. Stepping outside the protective cocoon of promotional poster boy means Le will have to prove his unorthodox San Shou style can work against opponents more than capable of making his senses a souvenir for some lucky fan in the mezzanine.

Avoiding that fate means Le must control space. He keeps his hands low, which will be all the invitation Smith needs to step forward and put his punching power advantage to work. Normally, Le uses snap and side kicks to the body to dictate distance and keep his opponents from finding the range on their counters. Not a bad strategy since Le’s short reach makes a conventional jab somewhat ineffective, but by reaching with kicks and keeping his hands low, Le leaves himself open to the overhand right counter, which happens to be Smith’s brain-rattler of choice. Frank Shamrock had some success with the counter right in his bout with Le, and that may be the punch on which this fight hinges. 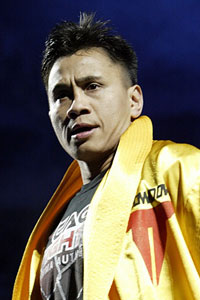 Jeff Sherwood/Sherdog.com
Could Le face his first MMA loss?
Le simply does not possess Smith’s pure knockout power and instead relies on volume and accuracy to pick apart opponents. As a result, he will give Smith plenty of time to find a home for the one punch he needs to send the Strikeforce front office into synchronized seizures.

The X-Factor: Few fighters work the body as judiciously as Le. It represents his best weapon against Smith, who uses a high defensive posture that leaves his body exposed. The catch-22? Le will be open to counters every time he throws those kicks, and his chin remains unproven against four-ounce gloves.

How Le reacts to getting cracked will prove pivotal, as Smith has shown time and time again that he has an appetite for destruction that would make Axl Rose blush. Getting into a firefight with Smith has proven a losing proposition if one cannot eat his fair share of punishment, something for which the San Shou world does not prepare you.


The Bottom Line: If nothing else, we can expect a crackling fight, as neither fighter seems the type to back down. Le will eventually pay the price for his boldness, as Smith seizes control of the bout with accurate boxing and just enough defense to keep himself upright. Watch for Smith’s right hand doom-hammer to make an appearance early in the third round, as he hands Le a double-pack of early Christmas gifts -- a loss and a sore jaw.