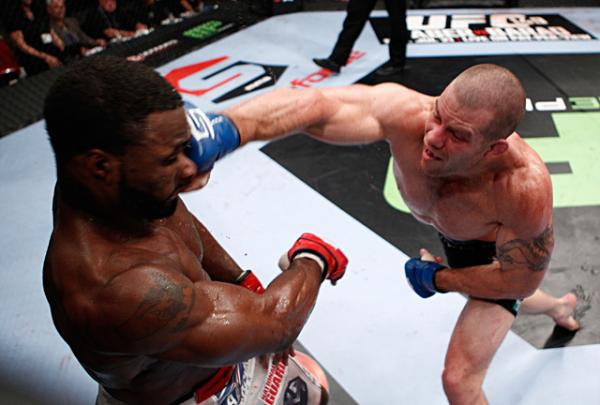 
Strikeforce bids farewell on Saturday with an 11-bout lineup from the Chesapeake Energy Arena in Oklahoma City. The 63rd and final event held by the California-based promotion features a welterweight title bout between champion Nate Marquardt and Belgian challenger Tarec Saffiedine and allows several more prominent fighters -- Daniel Cormier, Josh Barnett, Gegard Mousasi and Ronaldo Souza among them -- to showcase their talents one last time before an expected exodus to the Ultimate Fighting Championship.

For a while, it appeared as an Aug. 18, 2012 show would serve as the Strikeforce swan song, as events scheduled for Sept. 29 and Nov. 3 were unceremoniously canceled. Fortunately, Strikeforce receives a more dignified goodbye as the first major event of the calendar year, so dry your eyes, fight fans. It was a good run while it lasted.

Here is a closer look at the Strikeforce “Marquardt vs. Saffiedine” show, with analysis and picks:

File Photo
Saffiedine has never been finished.
The Matchup: To the victor go the spoils of being the answer to a trivia question, as either Marquardt or Saffiedine will be forever immortalized as the final 170-pound champion in the promotion’s history. More importantly, the winner can use the bout as a springboard to more meaningful bouts in the Octagon once the transition to the UFC is complete.

Marquardt’s debut in the hexagon turned out to be a more-thrilling-than-expected triumph over Tyron Woodley in July. In that bout, the Grudge Training Center representative demonstrated good composure in weathering an early storm from the All-American wrestler before putting his considerable power on display and eventually finishing the fight in the fourth round. Long one of the UFC’s top contenders at 185 pounds, Marquardt should be an immediate person of interest at welterweight in the Las Vegas-based promotion’s improving welterweight division, assuming he takes care of business here.

Meanwhile, Saffiedine has enjoyed a respectable run through the soon-to-be defunct promotion, compiling a 5-1 record with wins over James Terry, Nate Moore, Scott Smith, Tyler Stinson and Roger Bowling. His only setback came when his diverse striking arsenal was short-circuited by the pressure and wrestling of Woodley at Strikeforce Challengers 13.

None of those victories will adequately prepare the Belgian fighter for the well-traveled Marquardt, a former middleweight King of Pancrase and onetime UFC title contender. The Coloradan is no stranger to the bright lights of a main event, and bouts with the likes of Anderson Silva, Martin Kampmann, Demian Maia, Chael Sonnen and Yushin Okami -- to name a few -- have given him a wealth of experience inside the cage.

In recent years, Marquardt has struggled against dominant wrestlers such as Sonnen and Okami, but he was, for the most part, able to thwart the takedown game of Woodley in his most recent outing. He is stronger and most likely a better wrestler than Saffiedine, who prefers to keep the majority of his contests on the feet. Marquardt, an able counterpuncher, will need to figure out his opponent’s timing and respond in turn. Saffiedine can be a difficult puzzle to solve at times, thanks to his ability to switch stances and land a versatile arsenal of punches, kicks, knees and elbows in various combinations. Saffiedine is also a cerebral fighter capable of making adjustments on the fly based on the skill set and game plan of his opponent.

While Saffiedine is generally the more accurate striker and lands with greater volume, he rarely finishes fights on the feet; just one of his 13 career victories has come via knockout. Instead, the Team Quest member utilizes speed, movement and angles to rack up points, and he maintains a good sense of when to transition to the various different elements of MMA. However, despite being a durable competitor who has not been finished in 16 fights, Saffiedine has yet to face anyone who combines power and well-rounded skills like Marquardt, who has earned five of his last six wins by knockout or technical knockout. “The Great” can land solid combinations once he gets in a rhythm, but he is also more likely than Saffiedine to change levels and force the fight to the floor.

The Pick: Marquardt has more options and experience, and while Saffiedine might be able to hang around if he picks his spots carefully, he will eventually get caught. Marquardt wins by TKO in the third round.