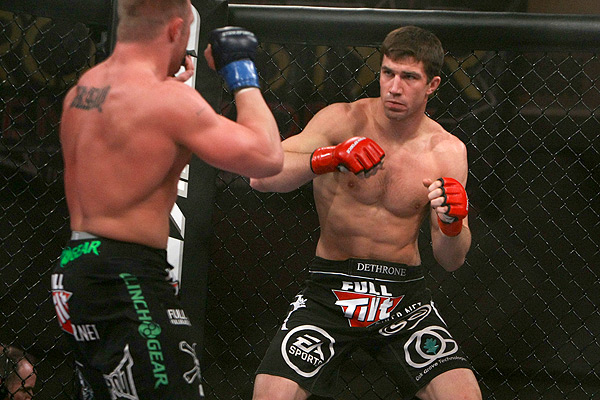 Sherdog.com
Kennedy has won six of seven.
A busy July in the mixed martial arts world rolls on, with Strikeforce taking center stage for the third major event inside of a week on Saturday at the Rose Garden in Portland, Ore. Two championship bouts headline the card, as Luke Rockhold looks for his second successful middleweight title defense against Tim Kennedy, while Nate Marquardt and Tyron Woodley vie for the vacant welterweight strap.

The San Jose, Calif.-based promotion has absorbed its share of criticism in recent months, but two title bouts on one night is not a bad offering at all, especially when all the combatants involved could hold their own in any organization.

Here is a closer look at the Strikeforce “Rockhold vs. Kennedy” card, with analysis and picks:

The Matchup: Rockhold has jumped on the anti-Jackson’s Mixed Martial Arts bandwagon by recently saying he was not impressed with the game plans hatched by renowned trainer Greg Jackson. Since Kennedy trains with the Albuquerque, N.M.-based gym, it will be interesting to see if he fights any differently against the American Kickboxing Academy product to prove a point.

Rockhold looks like the type of athlete who can have an extended reign as Strikeforce champion and, eventually, contend at 185 pounds in the Ultimate Fighting Championship. He displayed superior quickness and footwork in dispatching longtime UFC veteran Keith Jardine in less than a round in his first title defense in January. Rockhold did break his right hand in the victory, and it seems that injuries could be the greatest hindrance to the 27-year-old’s progression -- he had an 18-month layoff from February 2010 to September 2011 due to shoulder problems. Outside of that, Rockhold has been swift and merciless in his MMA career to date, as only his bout with Ronaldo Souza has lasted past a single round.

Kennedy has been out of action for nearly a year since besting Robbie Lawler last July, and he nearly lost his toe during a freak training accident in January. Kennedy has already had one title shot during his Strikeforce tenure -- a hard-fought decision loss to “Jacare” in a bout in which the Jackson’s MMA member avoided being taken down while outstriking the Brazilian jiu-jitsu ace on the feet for the majority of their 25-minute encounter.

Rockhold also went the distance with Souza, but he was able to land enough combinations on the outside to get the nod from the judges. The Californian’s standup is much more fluid than Kennedy’s, as he mixes his strikes well while relying on a solid counter right hand to punish opponents who attempt to get in takedown range. That will be Kennedy’s primary objective in this fight. Takedowns helped him neutralize the numbing power of Lawler, and they will prevent Rockhold from racking up points, too. Getting Rockhold to the mat is one thing -- Souza was able to do it five times in their fight -- but keeping him there is another.

The champion was able to consistently get to his feet against “Jacare,” an impressive accomplishment against a world-class grappler. This will not deter Kennedy, who is extremely confident in his wrestling ability and will doggedly pursue the takedown until he is successful. His approach had Lawler fighting tentatively, as he was hesitant to let his hands go for fear of being planted on his back. Working in Kennedy’s favor is that he is not afraid to absorb punishment to dictate the location of the fight.

The problem here is that Rockhold is a diverse striker, and his tools should allow him to control distance, while he has also proven himself a willing combatant in close quarters with dangerous knees in the clinch.

The Pick: Kennedy is as tough as they come, but it is hard to imagine him controlling Rockhold with ground-and-pound and positional control for the better part of 25 minutes. That means he will have to take his chances on the feet, where Rockhold will win the majority of the exchanges. Kennedy will make the champion earn everything he gets, but it will not be enough, as Rockhold captures a decision.