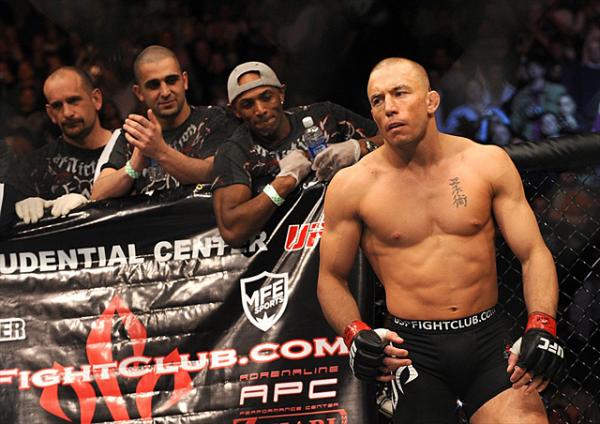 ALBUQUERQUE, N.M. -- It is perhaps the most prevalent image associated with Jackson’s Mixed Martial Arts today, symbolic of the renowned fight team’s rise to prominence over the past decade. It graces the business card of general manager Ricky Kottenstette, as well as the covers of both of trainer Greg Jackson’s books, “The Stand Up Game” and “The Ground Game.”

The picture itself is a display of unity and confidence. Jackson is at the forefront, arms crossed; flanking the trainer’s left side are Nate Marquardt, Rashad Evans and David Loiseau. On his right are Joey Villasenor, Georges St. Pierre and Keith Jardine. It is an accomplished group of mixed martial artists and a snapshot of a time when Jackson’s dojo was successful, yet not extraordinarily large in numbers.

Most would agree the image is in need of serious updating.

However, to truly do the team justice would require a much broader lens. Off the top of his head, Jackson estimates that approximately 70 professional fighters are currently a part of his stable. This is no place for pretenders, either. Most everyone who shows up to the Albuquerque training facility has experience at the sport’s highest levels or has designs on getting there.

Despite a cadre of contenders bumping elbows on a daily basis, teammates have dutifully avoided each other in the cage over the years. That policy, Jackson reveals, dates back to a time even before he was a well-known cornerman of champions.

“Keep in mind, before I was ever an MMA coach I was a grappling coach. Before we ever wrecked it in King of the Cage or any of those other organizations, we were wrecking it in grappling tournaments,” Jackson told Sherdog.com. “And even then, we didn’t do it. Since [1994], no one has ever fought each other.”

As the cliché goes, there is a first time for everything. Eventually, interim champion Carlos Condit is expected to challenge St. Pierre to unify the welterweight title once St. Pierre fully recovers from a knee injury. After beating Nick Diaz at UFC 143, Condit appears content to wait for St. Pierre’s return, though a summer bout against another top contender is not entirely out of the question. Still, the elephant in the gym must be addressed at some point.

After more than 17 years of turning the other cheek -- from grappling events to regional cards to UFC pay-per-views -- it is inevitable that a pair of Jackson-affiliated fighters will meet in the Octagon. 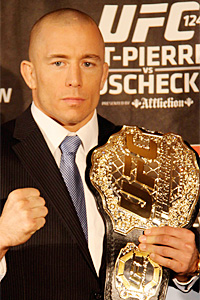 Sherdog.com
GSP carries the title with class.
Condit and St. Pierre were originally scheduled to meet at UFC 137 after Diaz drew the ire of UFC President Dana White by failing to show up for consecutive pre-fight press conferences. Condit was moved to top billing against the champion, but St. Pierre’s first injury nixed that plan.

Though Jackson did not expect things to transpire the way they did last fall, he had already spent some time preparing for such a possibility.

Evans’ split from the team early in 2011 was a game-changer. Evans decided he could not co-exist with UFC light heavyweight champion Jon Jones if the two were going to eventually fight, so he pointed a finger at Jackson on his way to Imperial Athletics in Boca Raton, Fla. If such an incident arose again, Jackson did not want a repeat of the drama that resulted from a very public feud between Evans and Jones.

“That went in a really bad way, and I didn’t want to be responsible for any negative stuff. I had to re-evaluate and talk to everybody
and put those protocols in place,” he said.

Those protocols are Jackson’s acknowledgement that an instance like Condit-St. Pierre is not going to be a one-time deal. More of his charges will have to lock horns eventually, and it could likely be two competitors from Albuquerque next time.

“[It’s going to come up] over and over and over,” Jackson said, “but that’s why I put protocols in. It wasn’t a reality until this last year, really, but now that we have so many guys from our team in the top tiers of the divisions -- almost every single division -- it’s gotta happen. It’s just gonna be sooner or later.”

It has been well-documented that Jackson will be completely neutral for a matchup between Condit and St. Pierre when the time comes. He will not make the customary trips to Montreal to game plan with St. Pierre like he usually would prior to a fight, and when Condit is working out in Albuquerque, Jackson will force himself to look the other way. He already had some practice last year when both fighters began their camps for the proposed UFC 137 matchup.

“It’s very weird not being able to help,” Jackson said, “but rules are rules. If I expect my soldiers to go by them, then I’ve got to go by them.”

When Condit and St. Pierre do meet, striking coach Mike Winkeljohn and Chris Luttrell, who was the first black belt under Jackson, will oversee Condit’s preparation. Meanwhile, St. Pierre will likely work with Firas Zahabi, Phil Nurse and John Danaher. Jackson briefly outlined how future teammate-versus-teammate clashes will be handled.

“There's details, but, basically, we keep the belts on the team, I step out and we look at it as more of a team thing,” he said. “It’s funny because something like that can break your team. It’s easy to stand on the sidelines and say, ‘Well, this is an individual sport.’ It really isn’t; then train by yourself and see how far you get.

“It’s a team sport in which you need to have people to train you,” Jackson continued. “You can be like boxing and have that vibe where you just pay people to do it. We don’t make that kind of money, most of the guys. And what fun is that? That’s a terrible way to live.”

Jackson has adopted a different stance for the April 21 light heavyweight title clash between Jones and Evans. Since Evans is no longer officially part of the gym, Jackson has agreed to corner “Bones” against his former charge. The decision did not come without a great deal of deliberation. Ultimately, Jackson put the team ahead of his personal feelings.

“Am I going to make this about me, or am I gonna make this about the team?” Jackson said during an interview on the Sherdog Radio Network’s “Savage Dog Show” in February. “I can’t be self-centered. Even though it’s something that I don’t want to do, it might end up that way.”

Less than two weeks after that interview, Jones made it official on his Twitter account: “Greg Jackson confirmed today that he will be in my corner for UFC 145.”

There is a large contingent of the fighter population at Jackson’s MMA that has only a passing familiarity with St. Pierre, including Condit himself.

“The Natural Born Killer” met the welterweight champion nearly two years ago at the gym. Pleasantries were exchanged, and then Condit kept his distance, anticipating the time would come when he would challenge St. Pierre for his belt.

“It was just introductions and ‘Hi, how ya doing,’” Condit recalled.

“
It’s easy to stand on
The sidelines and say,
‘Well, this is an individual
Sport.’ It really isn’t; then
Train by yourself and see
How far you get.

The former World Extreme Cagefighting champion is a homegrown New Mexican in the truest sense. As he attended Cibola High School on Albuquerque’s West Side, a teenaged Condit become a well-known presence on the local fight scene, all while learning the sport under the tutelage of Arlene and Tom Vaughn, another Jackson protégé. Condit left Vaughn’s FIT NHB gym for Arizona Combat Sports prior to his UFC debut against Martin Kampmann. It was not until 2010 that his affiliation with Jackson became official.

Still, it was not as though the team was adding a stranger. Most know him better than they do St. Pierre.

“These are the guys that I train with every day; I’ve known a lot of these guys for over a decade,” Condit said. “I think they want to see me do well.”

Finish Reading » “Our team’s just gotten too big. If we’re successful at all, that means people are winning, and people will end up fighting. There’s no way around it.”