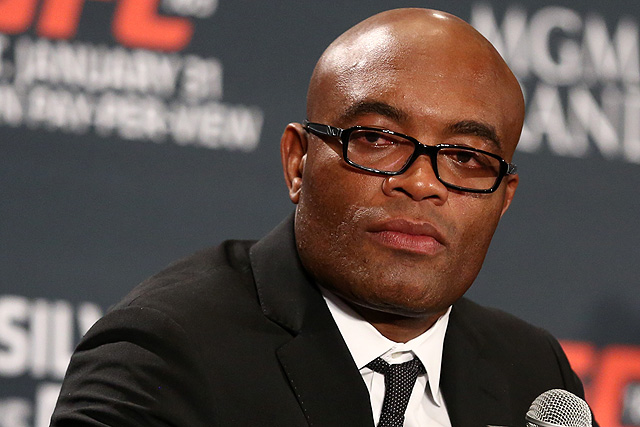 For the UFC, Groundhog Day came a day late this year. After four events and one major scandal in just the first month of 2015, you'd think that a weekend without an event would be welcomed by Zuffa. Then again, the last time the company had a clear schedule for a week, Jon Jones' cocaine drama surfaced and radically changed the discussion happening in the sport.

Once again, a quiet Tuesday afternoon disrupted with the news of a failed pre-UFC 183 drug test. And not just any failed drug test, no. This wasn't a run-of-the-mill Nick Diaz-smoked-weed-before-the-fight positive test, but rather Nick Diaz smoked weed before the fight and arguably the greatest fighter ever, Anderson Silva, had tested positive for steroids. Two kinds of steroids, at that.

The middleweight great's test failure has now become the only MMA news. What does it mean for “The Spider's” legacy? What should happen to Silva, should the evidence convict him? And what is the value of pre-fight drug testing if it can't actually stop cheaters from entering the cage, fighting and winning?

It's not just Silva, though. Former UFC title challenger Jon Fitch tested positive for elevated testosterone this week, and Fitch's positive pre-fight test stresses the same difficult question about pre-fight testing in another major state. Speaking of California, Diaz's third positive pot test has readers assessing the changing attitudes toward marijuana in the sport, too.

All these positive tests. Someone's going to have to check all those B samples, too. I bet all that overtime at the laboratory pays well, too, which means lyin', cheatin' MMA is still paying off for someone, as we speak.


I can't believe how shocked people were when Anderson tested positive. He never failed a drug test til now, but his run reminded me of Barry Bonds more than anything. He always a very good fighter, but he took it to another in his mid-to-late 30's and was more dominant than anyone in else history for a good stretch. I think it's only a matter of time before guys like Jon Jones get caught and it makes you wonder if Georges St. Pierre didn't get out of the sport at exactly the right time. -- Stephen from Sacramento

Tristen Critchfield, news editor: Let’s examine this idea more closely for a second. Anderson Silva turned 30 on April 4, 2005. At the time, he was coming off just the third loss of his professional career -- the memorable flying scissor heel hook submission defeat against Ryo Chonan in Pride Fighting Championships. He was an accomplished mixed martial artist, to be sure, but his UFC debut was still more than two years away. Physically, “The Spider” should have been approaching the tail end of his prime.

Fast forward to 2010, when Silva turned 35. Six days after his birthday, the then middleweight ruler authored a perplexing and maddening five-round decision triumph over Demian Maia at UFC 112, his third frustrating outing in four appearances. At the time, Silva was the unquestioned ruler of the division. He didn’t look like a fighter in decline. He simply looked bored.

In one sense, Chael Sonnen was perhaps the biggest performance enhancer of Silva’s career. By pushing the Brazilian to the brink of defeat at UFC 117, he made the champ look human and more importantly, provided him with a foil.

Maybe Silva was not subjected to more scrutiny during the twilight of his career because like that August 2010 evening, Sonnen shouldered the burden for him. The loud-mouthed Oregonian would become one of the sport’s most prominent recognized testosterone replacement therapy beneficiaries, and his dealings with various athletic commissions often took center stage as the sport attempted to rid itself of performance enhancing drugs.

Silva, meanwhile, continued to cruise along in his newfound role as beloved pound-for-pound great. However, to say that Silva peaked in his mid-30s seems unfair. Knockouts of Vitor Belfort, Yushin Okami and Sonnen in their return date were certainly impressive, but “The Spider’s” career had many more layers and highlights. If anything, his loss to Chris Weidman at UFC 162 signaled a decline in those sharp reflexes that carried him through so many fights. Perhaps the arrogance in refusing to recognize that played a role as well.

Silva was usually free from steroid suspicion for a couple reasons. Never failing a drug test, even in a most lenient era, doesn’t hurt. More importantly, he passed the eye test. Silva never possessed the veiny, bloated physique of a Belfort or a pre-UFC Fight Night Macau Cung Le. “The Spider’s” lean frame was athletic, not cartoonish. And if his hat size went up a few numbers, a la Barry Bonds, we sure didn’t hear about it. To borrow an Anderson phrase, his look, for all intents and purposes, is normal.

Now, does this mean we should chalk up Silva’s recent positive test as a one-time mistake? Not at all. As sports fans, we should know to suspend all naivete by now. Behind every star athlete could be an even better doctor, chemist or “nutritionist” -- maybe all of the above. To assume otherwise is to be made a fool of later. Baseball had its dark ages for steroids, but to think that game is 100 percent clean now is absurd. Home runs are down, but ambitious athletes will always find ways to skirt the rules.

The same is true for MMA. Not everyone is using, but there are probably more examples that would shock the masses if they came to light. Some fighters might not be looking to increase the power and velocity of their punches and kicks. Staying healthy through a fight camp is hard work. Without some kind of assistance, a valuable paycheck could be lost.

Let’s put aside all speculation about what Silva might or might not have done in previous years to gain an edge. He entered UFC 183 a little more than a year after shattering his leg. He’s almost 40 years old, attempting to return to the top -- or at least very near it -- of a brutal combat sport. That he needed some extra help to climb that mountain once again shouldn’t be surprising. That one of the sport’s most wealthy fighters, with myriad resources theoretically at his disposal, got caught, is the real eyebrow raiser.

Silva didn’t peak after 35; he just remained pretty damned good. But his recent efforts were not akin to Bonds’ bitter long ball quest. Against Nick Diaz, Silva looked like a man trying to hang on through one last ride. Unlike Bonds, he wasn’t chasing anybody. Instead, he was trying to live up to his own legacy, one that might be forever tarnished by a cloud of skepticism. Like his pal Sonnen, it may force him out of the sport for good.