Everyone answers to somebody, so we, the staff at Sherdog.com, have decided to defer to our readers. “The Doggy Bag” gives you the opportunity to speak about what’s on your mind from time to time.

How is Randy Couture not even in the Sherdog.com heavyweight top 10, and two of the last opponents that he beat, are ranked? It’s that kind of crap that makes me doubt your credibility. Andrei Arlovski's last two fights were to two IFL guys that were not even in the top 10, and Josh Barnett’s last fight was against an old dinosaur in [Pedro] Rizzo. Do you guys hate [Couture] or something? What gives?
-- Jeromey Andaya

Jordan Breen; radio host, columnist: First, to be fair to both Arlovski and Rothwell, Sherdog.com ranked Rothwell tenth amongst MMA's heavyweights prior to losing to the “Pitbull.”

If you look back at previous editions of our rankings, you will notice that Couture was ranked third, behind only Fedor Emelianenko and Antonio Rodrigo Nogueira for just about the entire duration of his comeback -- ahead of both Arlovski and Barnett -- whom you mentioned.

The bottom line is that he was removed from the list for inactivity. For our purposes, any fighter who has not competed within a year and does not have a bout scheduled in the next 30 days is ineligible to be ranked.

Our rankings draw on a period of activity much longer than 365 days, generally three years and change or so. This is a way to ensure that fighters who are active and successful against their quality contemporaries are rewarded, and to also safeguard against other tricky scenarios, such as MMA's rash of short-lived “retirements.”

As you can see, Couture not being ranked at this moment is not a slight to his accomplishment or a personal vendetta, but rather a matter of nasty-but-necessary protocol.

Win or lose, Couture's Nov. 15 bout with Brock Lesnar will see him re-entered into the rankings. If he wins, the strength of his résumé as a heavyweight over the last three years will likely afford him the same rankings position he had before his exodus from the sport. However, even if he loses to the upstart Lesnar, strong wins over Tim Sylvia and Gabriel Gonzaga will still be enough to have him amongst heavyweight’s ten most meritous. 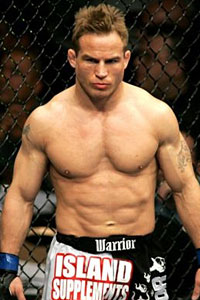 Photo by Sherdog.com
Where do you rank Sean
Sherk amongst the best
lightweights in MMA?
I was just looking at the Sherdog rankings and the heavyweight list is a joke, as well as the lightweights. You have [expletive] Sean Sherk at seven?

And I can’t believe you still have Takanori Gomi at four. Oh and you don’t have Couture in there but you have guys that he has destroyed in the top ten!

Seriously I’m not sure who put this together, but I think you should be fired! Hire me, especially if this site is based out of Lemoore, Calif., because I’m a Fresno resident. I want to officially challenge my MMA knowledge with whoever wrote these bogus rankings.
-- Matt

Breen: For my personal money, Sherk may be the second best lightweight on the planet. At the same time, I think our ranking of the former UFC lightweight champion is righteous.

We do not rank fighters based on extremely abstract notions of who is “best,” who would or may beat who, or any nonsense like that. In those terms, I, and many others, may put Sherk next to only Penn.

However, that doesn't change the fact that as a lightweight, Sherk is only 3-1. He beat Kenny Florian, who at the time was 1-0 in the division and hardly the quality opponent he would be considered today. His victory over Hermes Franca is certainly solid, but not outstanding. Sherk's recent win over Tyson Griffin, who our panel viewed as a top 15-ish opponent, is his best win as a lightweight by far.

I would say that there is debate to be had as to whether his résumé at this point is better than Gesias Cavalcante and Shinya Aoki, who are just ahead of him in our rankings at sixth and fifth, respectively. Fortunately for Sherk, being a top UFC lightweight, his future fights will almost assuredly all be against opposition who, at the least, are top 20 opponents.

If the Minnesotan is victorious, he will continue to climb our list. He certainly has the game to do it.

Gomi will inevitably tumble down the rankings due to his loss to Sergey Golyaev. That notwithstanding, prior to his upset loss to the Russian, Gomi had emphatic wins in roughly the last three years over Tatsuya Kawajiri, Hayato Sakurai and Mitsuhiro Ishida, as well as solid victories over Luiz Azeredo (twice) and Marcus Aurelio.

Certainly, his loss to Aurelio in their first bout factors into the equation, and unfortunately, his loss to Nick Diaz was ultimately declared a no contest. However, we observe the official rulings of fights to avoid introducing bias into the rankings.

So, prior to his recent setback against Golyaev, Gomi still was the owner of a very sterling résumé over the period of consideration.

You'll be happy to know that Sherk will likely gain a spot in our next rankings update due to Gomi's misstep.