Everyone answers to somebody, so we, the staff at Sherdog.com, have decided to defer to our readers. “The Doggy Bag” gives you the opportunity to speak about what’s on your mind from time to time.

Even from watching Evan Tanner’s fights -- which always turned out entertaining -- you could tell he was a free spirit. I enjoyed hearing stories of him hiking off in Mount Charleston or Red Rock. As a person who once lived in Oceanside and walked the boardwalk and pier many times, I could see the peace he may have found by the ocean.

But in the end, regardless of his lifestyle he truly lived a deep life. May his spirit be at peace and always be remembered and cherished!
-- Tom

I sat down at my desk at work on Tuesday morning, and immediately I saw the title of the article reporting his death. I had a sick feeling in my gut and yelled out [obscenities] without realizing my words (my co-workers all heard it and asked me what’s wrong).

I am amazed at how much his death has affected me, and I am sad to the point where I am emotionally distressed.

I did not know him personally, had never met him, but followed him ever since his UFC debut. I read his blogs on MySpace as he is my friend and exchanged a few messages with him.

The more I read about him, the sadder I get, realizing how we lost such a unique one-of-a-kind fighter. It is sad these days that more fighters -- and even people for that matter -- do not hold the type of values Tanner did.

His outlook on life, his struggles, and everything about him is very intriguing and beautiful. It was awesome to read the thoughts of people who knew him, and to get a better idea of the man, Evan Tanner.

A little off subject, but I think his life and death would make arguably one of the greatest movies of all time. The guy did it all, and I can’t see how it wouldn’t deeply touch every individual on this planet. I know it’s quick and might even be rude to discuss something like this so soon, but I think it is a necessity, and would be a great way to show MMA to the world in cinema. 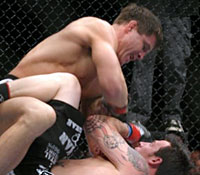 Photo by Sherdog.com
A complex man outside of the
cage, Tanner was a threat from
any position inside the Octagon.
Loretta Hunt, News Editor: Thank you all for sharing such thoughtful replies. In Evan’s quiet complexity, he did touch many in the MMA community, including myself. I first interviewed Evan in 2002 at UFC 38 in London. Standing off to the side away from the journalists with a tight knit hat pulled down almost to his eyes, Evan was a 6-foot statue doing a very convincing impersonation of a wallflower. Evan’s humbleness drew me to him right away. When I approached him he seemed surprised and really taken aback, like he wondered why I’d bother to interview him though he’d just won his bout convincingly.

There are fighters that crave the spotlight, and then there was Evan Tanner. Evan seemed content just to be a part of this sport, though he had that same competitive streak prominent in all athletes who choose fighting as their profession. Watching him quench that thirst in 2005, when he won the UFC middleweight title, was an honor for me.

Evan was effortlessly personable. Often, Evan and I ended up talking about anything other than fighting. Some fighters are just that way. When I planned a cross-country trip in 2005, Evan pestered me until I agreed to stop at his favorite little Thai restaurant in Amarillo. I am glad I did, because I got to see and experience a place that meant something to him. Evan certainly meant something to all of us.