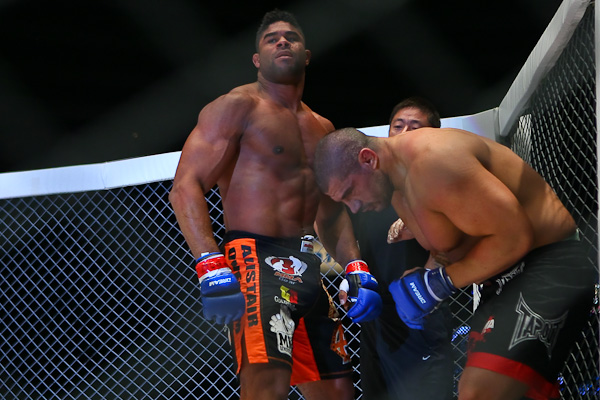 In this edition of The Doggy Bag, readers are concerned about questions of shame and fame. For would-be UFC heavyweight title challenger Alistair Overeem, it’s more the former than the latter as the particularly elevated 14:1 testosterone-to-epitestosterone ratio “The Demolition Man” turned in for a pre-licensing test in Nevada has turned his potential May clash with Junior dos Santos to all-but-rubble. How’d Overeem screw it up and what comes next?

Speaking of Overeem, remember that guy he crushed in December? That fellow, former UFC heavyweight champion Brock Lesnar, is back and making headlines for his return to pro wrestling. Fans haven’t forgotten about Lesnar, however, and now questions about his legacy abound. And speaking of those legacies, where do we put them all? Do we need a Hall of Fame?

Our Sunday menu also features Bellator’s future rendition of reality TV, a list of UFC veterans in need of call backs and another take on the age-old argument about scoring fights on the whole.

I don't think that anyone is surprised by Alistair Overeem having elevated levels of testosterone, but what gets me is how a guy with a target on his back like this could screw up so badly. Also, from the UFC's point of view, they really don't need this kind of thing right now, do they? Junior dos Santos-Overeem was one of the few major fights coming up in the next couple months. What do they do now? -- Dan from Las Vegas

Jordan Breen, administrative editor: I think you very quickly get to the heart of how precisely most knowledgeable -- or even rational -- fans feel about this situation.

Alistair Overeem is a handsomely paid pro athlete with a strong team around him. I think what incenses people about his actions is the fact that a fighter with his amount of resources should have his own resident endocrinologist if he’s going to be going around with roughly 14 times a normal amount of testosterone. In a morbid twist, because of his enormous physical gains over the years and ongoing “horse meat” jokes, no one really was shocked by an outcome that at one time, would’ve shook the sport.

Quite frankly, I simply see people pissed off that they’re not going to get to see dos Santos-Overeem. When I see Dana White’s anger toward the situation, that’s what I see reflected more than anything. That, and his realization that his promotion is becoming more and more intimately associated explicitly with these kind of test failures.

Dana White’s exact words? “You are an absolute moron. You’re a brain-dead, absolute dummy. It’s a career killer.” However, for the same reason that Josh Barnett, he of three unrepentant, failed tests pasts, could end up in the UFC again, there is still a potential future for Overeem in the UFC. He’s a heavyweight, one of a few great ones, with a look that can sell. There is no question, however, that Overeem is at a major stage of re-evaluation, where he clearly needs to tighten the team around him -- if you’re going to take that much testosterone, at least hire a VP of Endocrinology for your team – and make better choices in general. Staying out of Las Vegas nightclubs might be one of them.

As for what they do now? The most obvious solution is promoting Frank Mir to the main event. It would be Mir’s 19th title shot, and they would need a new dance partner for Cain Velasquez, but I think Mir’s streak makes it palatable for most. It definitely seems to be the most popular “logical” action.

Me? I can’t help but agree with all those fight freaks who want to see MMA’s bizarre Cinderella Man Mark Hunt in there. Maybe I’m as sick as everyone else in these parts. Maybe it’s just low T.