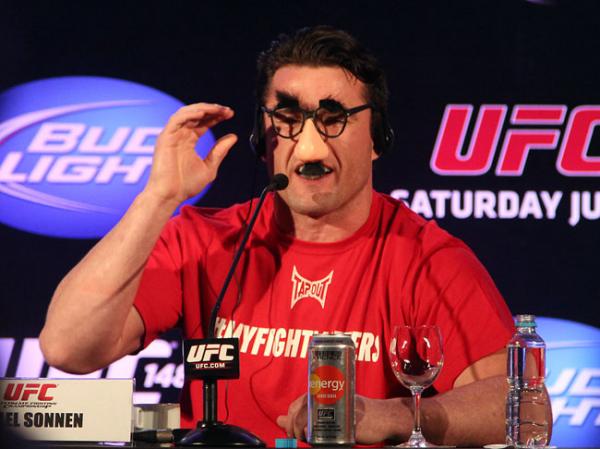 The UFC’s re-emergence in late April has left many of you with burning questions -- questions of the “Who? What? Where? When? Why” variety, as many MMA fighters are setting on new, unique paths, while several marquee fights have gotten disrupted.

For starters, why couldn’t Anderson Silva and Chael Sonnen keep their hotly anticipated rematch in Brazil? Why Las Vegas? And speaking of Vegas, what about UFC 146, with no more Alistair Overeem? Is a heavyweight-laden main card less attractive now without its true headliner?

Many folks aren’t over UFC 145 quite yet, either. Folks have queries about Jon Jones and Rashad Evans and their respective directions, of course, but precocious bantamweight dynamo Michael McDonald has got people flapping their gums too.

But “Mayday” isn’t the UFC fighter that most people are playing fantasy matchmaker for these past few weeks. With hard-hitting Bellator middleweight champion Hector Lombard finally signing with the UFC, the MMA fanbase is rapidly reimagining itself as Joe Silva, trying to forecast the first foe for the Cuban expat.

I understand that they couldn't do UFC 147 in Rio like they wanted to, but can someone explain why they had to move Silva-Sonnen entirely like that? Couldn't they have pushed this event back one week, or up one week? To me it seems like the better solution. Is there something more to this that I'm not seeing or did they really feel that they needed to bail out UFC 148 in Vegas? -- Claire from Seattle

Jordan Breen, administrative editor: If only moving an event were that easy. Firstly, let’s get the larger implications out of the way: the UFC screwed up big by thinking they could somehow plan around the United Nations Rio+20 event. The logistic nightmare they walked into was no one’s fault but their own. No hotel rooms, city streets shut down, difficulties in finding security detail, problems mobilizing mainstream media, and so on and so forth. Plus, this all happened in Rio because they couldn’t work around Sao Paulo’s noise ordinance. Just poor planning all around. Whether it was absent-mindedness or arrogance doesn’t matter at this point.

But, we have to appreciate the sheer amount of moving parts here. A week earlier in Rio doesn’t work, because it still runs into a three-day conference with meetings preparing for Rio+20 the following week. The week after, you’re a week out from the aforementioned UFC 148 card in Vegas. That’s a major card for the UFC, and they want time to promote it properly. You need a breathing period between events like this. Asking people to drop over 100 bones on two events in a week span is iffy, and that’s the situation where you start forcing people to pick-and-choose which events they check out.

Also, keep in mind that the UFC isn’t some reified entity, a faceless circus of fights flying around the globe. There are lots of employees to consider. Do you really want your entire staff before a major event not getting back to Vegas until late Monday, early Tuesday, then having them try to all the tasks necessary to set up for the slightly-after-Independence-Day card? This is a good example of how one small mistake can set off a domino effect, and why simply “move the whole card” doesn’t necessarily work.

In this case, multiple calculations were made: First, UFC 148 is a Vegas card that could potentially do better. A year ago, the same city for UFC 132 with Urijah Faber and Dominick Cruz, and even if there is a reality show behind them now, it’s not likely to do the same business as Silva-Sonnen, which could put it up over 750,000 PPV buys easily. At the same time, they realize that UFC 147 will still sell out 25,000 seats with Wanderlei Silva-Vitor Belfort in Felipe Drumond Stadium in Belo Horizonte, their new potential target. Given the situation, it’s the best lemonade-out-of-lemons solution to maximize profitability.

Is it “great” or “awesome” or anything like that? I wouldn’t go that far. Rio fans took some serious body blows over the course of this circus, and now aren’t going to get a chance to see an epic fight live. We’ll also be deprived of that stadium atmosphere for such an intense rematch. But for the Zuffa bottom dollar, it is the move they were forced into it.

The whole scenario is just a reminder that MMA and all of its characters should keep egos in check. Even if you’re used to counterprogramming and being the alpha dog, trying to stage a major event in a burgeoning international city at the same time as the United Nations is in town for a major sustainability conference? It’s a knockout loss every time. Even Joe Rogan could tell you that the United Nations has crazy KO power.