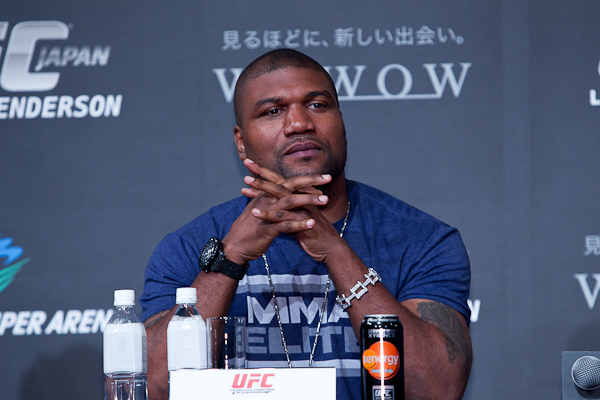 In this edition of The Doggy Bag, fans raise their collective voice and shout, “Has everybody lost their mind?!”

Quinton Jackson, is he losing it again? Do we need to hide the energy drinks? The former UFC and Pride Fighting Championships champion is now beyond discussing his Octagon exit. In a recent Sherdog Radio interview, “Rampage” revealed that his real interests now are in film and music and that screenplays might replace slams in his future. How can we make sense of this?

There are plenty more answers to be divined in this edition. Where are MMA’s tournament brackets at? Why is Dominick Cruz a coach on "The Ultimate Fighter" reality series? What was the referee thinking during Pat Curran-Joe Warren? What if UFC lightweight champion Benson Henderson gotten his chance on TUF 9?

MMA’s suddenly-strong Friday night schedule might not help you fill up your appointment book, but it has certainly helped fill up our inboxes.

The interview with Quinton Jackson from Friday's Savage Dog Show was one of the craziest things I've heard in MMA in a while. It seems like Jackson is having another personal crisis like he did around the time of his second fight with Wanderlei Silva. Music? A screenplay? I've loved following his career since his early days in Pride, but not only does he seem like a spent force, I worry if he's in any psychological shape to be fighting again, too. -- Peter from Los Angeles

TJ De Santis, Sherdog Radio Network program director: Peter, as someone who has been around MMA and Quinton Jackson a long time, I understand where you’re coming from questioning Rampage’s motives. I even understand you worrying about his psychological well-being. However, you have to realize one simple thing: Quinton Jackson is not a normal person.

Now, when I put something out there like that, it may sound as if I am insulting the former UFC light heavyweight champion, but, it’s actually quite the contrary. If Jackson was a “normal person,” he wouldn’t have Pride and UFC titles on his mantle at home. He wouldn’t have crossed the Pacific to thrill thousands of Japanese fans, nor would he decide he was “going to get paid to whoop ass.” The fact of the matter is that Quinton Jackson was and is crazy enough to make a career out of slamming people on their heads.

I sincerely hope we never see Quinton Jackson, or any other fighter for that matter, face down in a California street with police approaching with pistols drawn ever again. That being said, I think another breakdown like that for Jackson is doubtful. Quinton’s talk of musical ambitions, acting and screenplays are words of an entertainer. Jackson will be remembered as one of the first upper-echelon light heavyweights in the world, but don’t forget he is one of the better entertainers of our time. Why wouldn’t he still have those ambitions? Now, I highly doubt that Jackson will ever break the Top 40 with a single, nor do I really think he is capable of producing a must-see mixed martial arts film. However, the Memphis, Tenn.-born fighter is in a position to pursue such endeavors for the first time in his life really. Why shouldn’t he? Peter, I am not sure what it is you do for a living. However, I’m guessing that if you woke up tomorrow and told your friends and family that you were leaving work or school to see if you had the next best-selling rap album in your head your loved ones would scoff at the idea. They might question your mental well-being, too. But the fact that Quinton Jackson has acting experience, experience on the production side and a fantastic understanding of entertainment means that his goals are more attainable than a normal person who says he wants to make a dent in Hollywood.

Quinton Jackson isn’t the everyday man. That’s what makes him so great.