TOKYO -- The image of the North American mixed martial arts gym is the strip-mall storefront, outfitted with strength and cardio equipment, rings and cages. This is how “The Ultimate Fighter” and star-laden gyms such as Xtreme Couture and Jackson’s MMA have programmed us.

In Japan -- Tokyo, especially -- space is at a premium. Japanese MMA gyms tend to pack notable fighters into very tight spaces, cropping up in locations one would least expect.

The J-Rock Workout Studio occupies a quiet corner of Tokyo’s Shinagawa ward. Amidst a non-descript cluster of mom-and-pop stores and cramped apartment complexes, Yoshida Dojo’s dedicated MMA gym takes up the entire second floor of a small two-story building. From the inside, it looks and feels more like a converted studio apartment.

It is here that Hidehiko Yoshida’s stable steadfastly labors to be at its best for its benefactor’s sendoff on the April 25 Astra card at the Nippon Budokan. Yoshida himself faces star pupil Kazuhiro Nakamura in a final torch-passing bout, while noteworthy stablemate Michihiro Omigawa takes on World Extreme Cagefighting and Dream veteran Micah Miller and featherweight prospect Tatsunao Nagakura faces Japanese journeyman Akihiko Mori.

Yoshida as a significant and celebrated athlete in Japan cannot be overstated. Ryo Chonan, who still bears hand injuries from his Dream 13 encounter with Andrews Nakahara one month prior, asserted as much at an Astra press conference on March 31.

“If it was anyone else but Yoshida, I wouldn’t have said yes so soon after a fight,” said Chonan, echoing the sentiments of many in Japanese MMA.

Countless Western fans imagine fighters such as Shinya Aoki and Takanori Gomi as native stars, despite being nationally anonymous. There are few true household names in “kakutogi” remaining: Masato has retired, Bob Sapp and Hong Man Choi are receiving less airtime and fighters like Mirko “Cro Cop” Filipovic have migrated to the States.

Yoshida is one of the last of these transcendental stars of yesterday, and like all good things, reaches the end of his career in a matter of days. Remaining to carry on his legacy are the men in this small space, all of whom strive for the lofty accomplishments and distinctions that a trailblazing Yoshida achieved so many years ago. 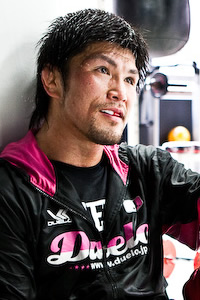 Joshua Lieberman/Sherdog.com
Omigawa is a reborn fighter.
At this moment, the gym plays host to eight toiling men. It is labor for them, not only to spar but to avoid colliding with each other on the tiny mat space. It still happens with enough frequency that the fighters break from endless five-minute rounds to act as human shields, directing the flow of traffic.

Michihiro Omigawa and his sparring partners need this treatment most frequently.

“Look at my arms; they’re really short,” Omigawa says with a wry smile, stretching them outward for emphasis. “I have to box with that Mike Tyson style.”

That is exactly what he does: winging punches from range, bobbing and weaving until he’s comfortably set in the figurative phone booth, compressing and exploding. Omigawa does not kick once the entire day. He later admits: “I’m bad at kicks.”

In his brisk sparring, Omigawa bullies partners from wall-to-wall, dropping them repeatedly. His sparring ends up controlling half of the gym’s small space during every round.

The reason for his boxing improvement has become clear. Three times a week, Omigawa heads to the Watanabe Gym. The Watanabe boxing camp serves as home to WBA super featherweight champion Takashi Uchiyama and was also where recently retired K-1 MAX star Masato Kobayashi worked his hands before his 2003 grand prix win.

Omigawa debuted in 2005 inside the Pride Fighting Championships ring -- a direct result of his connection to Yoshida -- and was smashed by veteran Aaron Riley. His career started with a 1-4 mark. Because of his powerful J-Rock management, Omigawa was one of the UFC’s few Japanese recruits in 2007, but decision losses to Matt Wiman and Thiago Tavares made for a short tenure.

A sub-.500 afterthought, Omigawa decided to cut to featherweight. Lifestyle and dietary changes soon followed, as he stopped “spoiling himself” and adopted an attitude befitting a prizefighter.

“I was really tired of losing. I thought about doing something else for a living, but the only thing I can do in life is fight,” Omigawa says. “Anything in my life I could eliminate that wouldn’t help my fighting career, I tried to get rid of.”

Prior to the 2009 Sengoku featherweight grand prix, Omigawa was viewed as an also-ran and was expected to pose little trouble for hot prospect L.C. Davis. Instead, Omigawa shocked onlookers by soundly controlling Davis on the canvas for an easy unanimous decision victory. After the bout, Omigawa got on the microphone and told the audience: “To those who said I would lose, kusottare!” His post-fight message hearkens back to Enson Inoue’s own after he defeated Randy Couture in 1998, essentially telling his doubters to “[expletive] off.”

“
If there wasn’t a ring to
fight in, I wouldn’t have
anywhere to be myself.

“The ‘kusottare spirit’ came to me before the tournament, when people were telling me that L.C. Davis would beat me. I didn’t like it,” says Omigawa with a subtle, satisfied smile. “In judo, when people used to tell me, ‘you’re weak, you’re a loser, you’re not strong enough,’ this drive to prove them all wrong used to rise up in me.”

His wins since Davis have been impressive but not without controversy. While he crushed the likes of Nam Phan and Hiroyuki Takaya, Omigawa won two contentious and controversial decisions over then-unbeaten Brazilian Marlon Sandro and standout Hatsu Hioki. Nonetheless, quality wins have made him a relevant featherweight in just over a year.

His soft-spoken, gravelly-voice could easily be mistaken for meekness, but Omigawa does not mince words. In a sporting culture where athletes are often given to platitudes and diplomacy, Omigawa’s direct, honest and unrehearsed proclamations are refreshing.

“I’m really emotional and passionate about things, so it’s not something that I’m trying to engineer,” he says. “Like I said earlier, all I can do with my life is fight. The ring is the only place where I can express myself fully. If there wasn’t a ring to fight in, I wouldn’t have anywhere to be myself.”

Not everyone in this gym comes from a judo background. In fact, two of its newest prospects, Sengoku standouts Maximo Blanco and Shigeki Osawa, were both outstanding wrestlers. Then there’s Nagakura, who represents rugby. Instead of music, Nagakura’s entrances see him flanked by his Ritsumeikan University rugby teammates performing the haka, made famous by the New Zealand All Blacks.

“Many fighters use music for their entrance, but none of the music I’ve listened to has clicked with me, so, instead, I’ve stuck with the haka,” Nagakura says. “Rugby is my roots, and the haka is something special that I’d like to keep on doing for all my fights.”

At the moment, Nagakura’s pre-fight haka contingent is comprised of himself and two teammates. For the coming Mori bout, he has promised that at least seven to 10 people will perform it with him. When made aware of the fact that “it’s considerably more than two people,” Nagakura’s stoic facade cracks with a chuckle.

It is a small victory to expose his sense of humor beneath his stoniness. Although he’s friendly and answers all questions without hesitation, Nagakura is succinct and does not often elaborate unless prompted. One has to wonder if there’s some rugby school of stoic pragmatism to which he subscribes.

The haka remains the most visible artifact of a rugby background that has followed him into professional prizefighting, especially since Nagakura himself will admit not much translates well into MMA.

“In team sports, naturally, everyone rallies to work together,” he says. “In fighting, although you train with a team, you’re on your own when you’re in the ring.”

On the other hand, one of the greatest advantages to being a former rugby player is growing accustomed to violent physicality, which makes being hit easier to accept. This is not always the case with accomplished grapplers coming into MMA, as many fail simply because they can never adjust to being struck in the face.