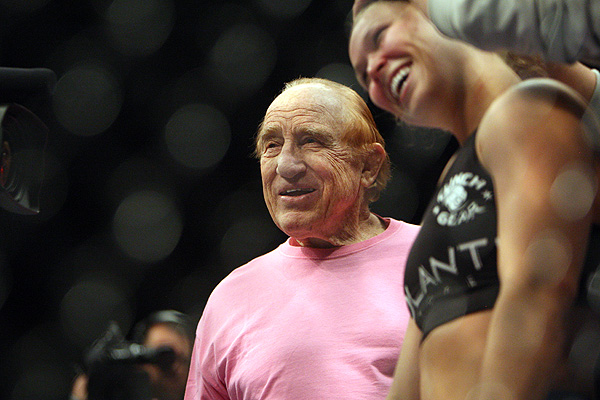 
He represents that rare breed you would trudge through herds of yak and across a barren, icy tundra to seek out his vast wisdom. After uncovering his secret, isolated location -- maybe a Tibetan monastery tucked on the side of some Himalayan mountaintop -- there you would finally find Gene LeBell emerge from underneath a thatched roof and shadowy stone pillars, wearing a monk’s robe.

His status beyond iconic, the line between myth and man oftentimes becomes blurred.

“Gene is real -- very real -- and those movie guys are not [what] you’ll find,” close friend Gokor Chivichyan said with a laugh. “You don’t have to climb a mountain to find him. He’s here every Monday, at the Hayastan MMA Academy, between 6:30 p.m. and 9:30 p.m., teaching. I’ve been all over the world, and there’s no better teacher in the world than Gene LeBell.”

Many believed that decades ago, and they still do. They flock to see him, the droves spurred by the knowledge that LeBell will turn 81 in October. The legendary coach and mixed martial arts pioneer may be in the twilight of his life, but he remains quite virile. His mystique is surrounded by tall tales -- whether he choked out Steven Seagal and made him soil his gi is still disputed by some -- and some not-so-tall tales, like appearing in the first-ever televised MMA match against Milo Savage in 1963.

“Judo” Gene has been everywhere and seen most everything, a legend who rubbed shoulders with other legends. He has worked with and taught so many, from John Wayne and Steve McQueen to transcendent fighters like Muhammad Ali, Bruce Lee, Antonio Inoki and Chuck Norris. Nicknamed the “Godfather of Grappling,” LeBell still rides motorcycles -- again, he is 80 -- and remains deeply entrenched in MMA as a trainer, mentor and confidant of Ultimate Fighting Championship women’s bantamweight titleholder Ronda Rousey.

LeBell has reached that testimonial stage in life where many of his answers are rehearsed and tried. His tales have grown a nebulous quality, from what he has actually done to what years, time and hearsay has concocted and exaggerated. Still, one cannot help get the sense that underneath it all LeBell is a sweet, old man with a genuine caring heart for the people he has trained and continues to train. However, if you cross “Judo” Gene, even at 80, he still has the wherewithal to kick your ass. Remember, this is a man who wrestled Superman and allowed James Cagney to toss him around a few times when he was 16 years old.

What set apart LeBell from his contemporaries was that he played the part of a badass on screen and had the unusual quality of being an actual badass off it. His life has followed an almost Forrest Gump-like path, where he has stumbled into iconic events, like officiating the infamous Ali-Inoki match in 1976 and being closely associated with George Reeves, the original TV Superman who died tragically at the age of 45.

File Photo
Rousey was 13 when she met LeBell.
To the uninformed, LeBell has that type of omnipresent face one cannot initially pinpoint. Then it dawns on you: “Yeah, I know that guy. He was in that 1970s TV rerun I saw while channel hopping last night.” He has been knocked down, knocked out, shot at, punched, battered, beaten, bruised, broken real bones in stunts and probably taken more pratfalls than anyone in cinematic history.

“You know, it’s kind of funny, I never really thought about a future when I was younger,” LeBell said. “I took some criticism early on for wanting to be considered a legitimate fighter and for still being a stuntman. I won hundreds of trophies competing in judo and wrestling, but you know what? You put them all together and they don’t make a house payment. In the movies, the good guy comes along and beats the stuntman, so I have probably more losses than any other stuntman alive. I can say I’m financially in great shape, and that came from all of that losing.”

He may have lost on screen in the pretend world, but it sounds like LeBell never lost in real life. All of those descents carved out a marvelous career. Just ask the people around “Uncle Gene.” They will attest that the man radiates a certain glow, an incandescence that permeates others and does not appear as if it will ever dim.


LeBell’s wild, storied path started where one would expect: in a gym. Not just any gym, though. The Los Angeles Olympic Auditorium was a boxing staple where the sport’s best fought, from the 1930s through the 1970s. The shows were promoted by Aileen Eaton, Lebell’s mother and the first woman ever inducted into the International Boxing Hall of Fame. As a result, he had access to all of the great fighters of the 1950s and 1960s; an added bonus was seeing professional wrestlers like Lou Thesz and Ed “Strangler” Lewis up close and personal.

Through Eaton, the Olympic opened a whole new world to a mischievous kid who absorbed every hold and technique like a bloody sponge. Want an idea where his toughness was cultivated? Look no further than a mother who raised her son, despite the presence of Cal Eaton. He was her second husband after LeBell’s father died, and he was abusive towards his stepson.

“It was interesting, because at the start, people weren’t giving my mother the respect she deserved because she was a woman,” LeBell said. “She did have to fight for everything she got. I remember one time she hired a matchmaker who was trying to tell my mother what to do. My mom reminded him [that] she’s the boss and she could easily fire him and find someone else. That stopped right there. My mom had input -- the way she should have.”

To get rid of Lebell, his mother oftentimes sent him to the Main Street Gym or the Los Angeles Athletic Club. There, LeBell’s competitive zeal was pushed to greater heights, as he watched and worked out with Olympic wrestlers and witnessed firsthand the time and commitment professional wrestlers invested in their craft.

“Those guys really took me in and showed me a lot of things, technique, new holds, I learned everything from them,” LeBell said. “The judo was a little different then; it was grappling and striking then, and the other option was boxing. At first, I thought about becoming a pro boxer. The punch line for me was being asked if I wanted to learn boxing or grappling, which was a combination of everything.

Those foundational years drove home the importance of cultivating relationships.

“I’m in 13 halls of fames, and that doesn’t mean anything. That’s because the biggest compliment I ever got was when they called me ‘Uncle Gene.’ People always called me ‘Uncle Gene,’ and to me, that’s where I get a lot of pride from that,” Lebell said. “It was a small fraternity back then when you were somebody’s uncle. I remember asking Lou Thesz why they called people uncle. Lou explained to me [that] you grab and hook a guy, and they cry ‘Uncle!’ That’s where it comes from.

“Those guys back then used to kick the hell out of me, but I learned a lot from them,” he added. “I would wrestle a boxer and box a wrestler. I used to run around kicking the hell out of all these guys in other gyms. I probably hold the Guinness Book of World Records [mark] for being kicked out of gyms.”

LeBell used what he learned and entered wrestling and judo tournaments. In 1954 and again a year later, he captured consecutive titles at the Amateur Athletic Union National Judo Championships. Those were formative times for martial arts, and the thought of MMA being considered a mainstream sport was akin to Martians playing basketball on Venus. However, it is where LeBell the MMA trailblazer came into view.

“No one trained as hard or thought about judo as Gene did in those competitive years when judo was a relatively unknown cultural sport in the early 1950s,” said Hayward Nishioka, a legendary American judo pioneer himself. “His determination led him to search out places to practice, hidden away in Japanese cultural centers or in someone’s garage or at a Buddhist church, where in a large group of dedicated Asian faces there stood Gene, like a lone battleship in an ocean of Japanese destroyers. This was the same man, who, after his competitive years, helped to coach me when the idea of coaching was relatively unknown.

“
His determination led him to
search out places to practice,
hidden away in Japanese cultural
centers or in someone’s garage
or at a Buddhist church, where in
a large group of dedicated Asian faces
there stood Gene, like a lone battleship
in an ocean of Japanese destroyers.

“Perhaps never before or since Gene has there been a tougher man in American judo,” he added. “In his competitive years, he was gifted by the gods with a strong body that even to this day is fearsome. Upon meeting him, he is friendly and in many ways almost kindly now, but somehow looking at his frame you sense the gnarly trained muscles of a fighter that can put some real hurt on you, even some 50 years away from having proved himself the best in America, not once but twice.”

Finish Reading » “You see the respect Gene gets today, and that’s validation for all things he did when he was younger. Gene broke down a lot of barriers. He helped put MMA on the map.”