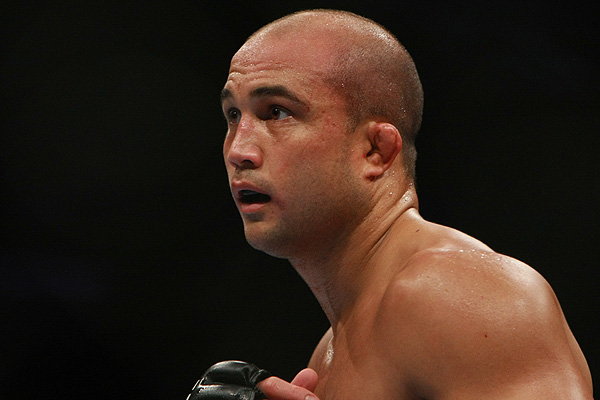 Prod-i-gy [prod-i-jee]
-- Noun
1. a person of unusual or marvelous talents
2. anything that is cause of wonder and amazement

B.J. Penn was called “The Prodigy” for a reason, many of them, in fact.

The first American to ever capture Mundials gold in the black belt division, Penn accomplished the feat in 2000 after just three years of formal training. He was most certainly a person of unusual or marvelous talents who caused wonder and amazement. Roughly a year later, Penn brought his otherworldly talents to the Ultimate Fighting Championship and forever altered the mixed martial arts landscape.

Penn christened his MMA career with three straight first-round finishes, as he bested Joey Gilbert, Din Thomas and Caol Uno in a six-month span and proved he was far more than a one-dimensional grappler. A majority decision loss to Jens Pulver in his fourth professional appearance cost him the UFC lightweight championship and cooled some of the hype around him. His work ethic, motives and drive were all questioned. However, even in defeat, the sense of awe that always seemed to accompany Penn never fully dissipated. Detractors and supporters fired barbs at one another throughout his career, which came to an unceremonious end in a technical knockout loss to Frankie Edgar at “The Ultimate Fighter 19” Finale on July 6 at the Mandalay Bay Events Center in Las Vegas.

The proud Hawaiian, having announced his retirement, walks away from the MMA scene as one of only two men to win Ultimate Fighting Championship titles in two divisions: He won the welterweight championship with a stunning upset submission against Matt Hughes at UFC 46 in January 2004 and claimed the vacant lightweight crown with a blood-soaked tapout against Joe Stevenson at UFC 80 four years later. Penn competed in five different weight classes, from 145 pounds to heavyweight. His 16-10-2 career record will be regarded by some as a disappointment, but keep in mind, eight of those 10 defeats were to former UFC champions: Edgar (three), Hughes, Pulver, Georges St. Pierre (two) and Lyoto Machida. That number could grow if Rory MacDonald or Nick Diaz someday gets his hands on a UFC belt.

As Penn turns over a new leaf in retirement, Sherdog.com staff members and contributors weigh in on their most vivid memories, reflections and appraisals of the 35-year-old future hall of famer’s trials, triumphs and importance to MMA: