Depending on where you are, bangers and mash will have different meanings.

Still in the hangover haze of UFC 95 -- a card featuring eight finishes and only two decisions -- Sherdog.com examines some of the UFC’s most memorable offerings in MMA’s latest hotspot: England.

One of the few hometown stars in the UFC’s inaugural foray across the pond, Weir put fans at Royal Albert Hall under an immediate spell: It only took 10 seconds for him to knock out Jackson. He faked a high kick -- a favorite weapon given his celebrated taekwondo background -- and flurried, leaving Jackson on his back. The fight remains perhaps Weir’s best win and is one of the fastest knockouts in UFC history.

Every once in a while, fans have the opportunity to witness two fighters elevate each other. That was the case when Paul Kelly met Paul Taylor. The two came out gun slinging, but the Wolfslair Academy prospect knew that the way to best his fellow Englishman would be to take Taylor to the ground. Kelly punished his opponent from inside his guard with elbows, but Taylor showed he has a combination for every day in the year and threw them whenever he was on his feet.

When fighters embrace each other as sportsman -- as Taylor and Kelly did at the end of the second round -- it’s usually a sign of a hard-fought war. In this case, it was also a sign of the “Fight of the Night” honors to come, as was the fighters being lifted off the floor by their respective corners after the bout.

The two have enjoyed mixed success since the fight, which Kelly won via unanimous decision, though they remain exciting British prospects. 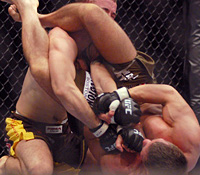 Photo by Sherdog.com
Upsets and comebacks are two
of the highest forms of drama.
Marcus Davis vs. Paul Taylor -- UFC 75 in London

Upsets and comebacks are two of the highest forms of drama.

When Davis -- a solid favorite despite a home-field disadvantage -- hit the mat thanks to a Taylor high kick, the plot was set in motion. Taylor was stepping up in competition and seemed to be stepping over Davis, following him to the ground and continuing to defuse “The Irish Hand Grenade.” Davis held on under the Brit’s onslaught, though, and eventually secured an armbar from his back late in the first round.

Thiago Tavares was known as a talented prospect. Matt Wiman, on the other hand, was known for his nickname, “Handsome.”

In this one, however, Wiman wanted an ugly fight. He walked straight at Tavares tossing around leather. At times he found himself defending the grappling game of Tavares, a Brazilian jiu-jitsu black belt, who also fed Wiman a huge right hand. In true Oklahoma fashion, Wiman spit it out, flurried and dropped Tavares.

“I've never been more excited. I just felt like I had a plateau that I couldn't get over … in my life,” Wiman said afterward.

Breaking Tavares seemed to be Wiman’s breakout performance, but in his next bout he dropped an underwhelming decision to Jim Miller.

Like the end of “Rocky IV,” the crowd had turned. Michael Bisping entered the O2 Arena a crowd favorite, but his defensive performance against aggressive American Matt Hamill found him little favor.

Stalking forward, Hamill landed punches and scored takedowns throughout the fight. When the split decision was announced for Bisping, fans in attendance jeered their fellow countryman. Turning a home crowd against a local hero is no easy task, especially when the challenger enters the arena to “Born in the U.S.A.”

Bisping, however, has since regained, if not surpassed, his popularity prior to the controversial bout.