World Extreme Cagefighting bantamweight champion Miguel Torres boosted his already formidable stature with a deconstruction of scrappy contender Manny Tapia on Dec. 3 in the first 135-pound television main event in American MMA history. Torres, called the best pound-for-pound fighter in the world on the WEC broadcast on Versus, seemed on another level, landing jabs and wacky strikes with a unique mix of calm and intensity.

Torres notched his 35th career win three minutes into the second round, knocking Tapia down twice with right straights and finishing him with punches and elbows on the ground. Torres earned $44,000 and credibility to spare with the win, which marked Tapia's first loss.

Next for Torres looks to be powerful Georgian Brian Bowles, who earlier in the evening impressively outboxed Will Ribeiro, a dynamic striker, and finished him with a third-round guillotine choke. Bowles, who earned $16,000 for his win and a $7,500 bonus for best submission of the night, said he was ready for a title shot after the fight, while Torres told Sherdog.com he thinks Bowles is deserving of a crack at the gold.

The two bantamweight tilts highlighted the latest WEC offering from the diminutive Joint at the Hard Rock Hotel and Casino in Las Vegas. The card will be the last in what has been the home venue of the Zuffa-owned WEC, as the hotel will soon be undergoing a billion dollar makeover.

In the coming months, WEC cards will also be influenced by matchmaker Sean Shelby, a longtime assistant of UFC matchmaker Joe Silva, who was recently re-assigned to assist original WEC owner Scott Adams. Though there have been various reports that Adams took heat for Mike Thomas Brown not being featured on live television before getting a featherweight title shot on Nov. 5 and for agreeing to a contract that guaranteed Jake Rosholt's fights would be televised, sources close to the situation say the stories were all fabrication. WEC officials would not go on the record regardless. 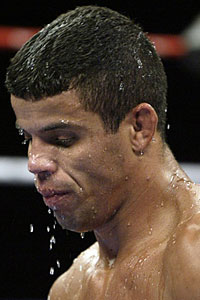 Jeff Sherwood/Sherdog.com
Waggney Fabiano finished
strong at WEC 37.
Also at WEC 37, two of the world's finest featherweights made their WEC debuts. The first and only IFL featherweight champion Wagnney Fabiano used his submission mastery to stifle the highly skilled Shooto veteran Akitoshi Tamura. Tamura proved strong on the feet and competent in defending Fabiano's deliberate hunt for submissions until a Fabiano arm triangle snuck in during the third round. Fabiano earned the second-highest payoff of the night with a $22,000 disclosed take for the win, which was not met with great enthusiasm from the live crowd.

In the evening's other televised bout, Joseph Benavidez, a protégé of Urijah Faber and a Dream veteran, battered Danny Martinez over three rounds with swift punching combinations and leaping kicks to earn the unanimous decision. In action that did not make air, NCAA Division 1 wrestling champion Mark Munoz toppled Ricardo Barros with a first-round TKO in the final WEC light heavyweight fight before that division is folded into the UFC. Two other collegiate grappling standouts, Johny Hendricks and Shane Roller, also picked up victories. IFL veteran Bart Palaszewski, who defeated Alex Karalexis via TKO, earned the “Knockout of the Night” bonus, while Cub Swanson and Hiroyuki Takaya both took home “Fight of the Night” bonuses for $7,500 each. Swanson won that fight by decision.

The WEC also this week confirmed that WEC 38 will take place on Jan. 25 in San Diego, the company's debut in the city. The event will be headlined by Jamie Varner vs. Donald Cerrone for the lightweight title and a rematch of the most-watched, most-hyped fight in WEC history: Urijah Faber vs. Jens Pulver. Faber said he was surprised but excited by the rematch in an interview on the WEC 37 broadcast. Featherweight champ Mike Brown’s title defense against Leonard Garcia looks to be on hold until WEC 39, which could take place in March. WEC 38 will go down the night after Affliction's "Day of Reckoning" pay-per-view, and will go head-to-head with the WWE Royal Rumble pay-per-view.