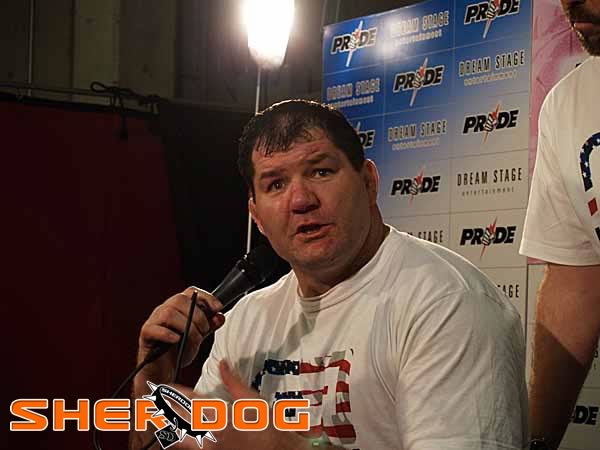 
Tom Erikson in his day was not the heavyweight star with a rippling comic-book physique over which promoters pined. He was a massive Midwesterner with a suffocating wrestling game, the kind of badass that does not make it on posters but instead rips apart unsuspecting poster boys.

The 50-year-old entered the fighting world through an NCAA All-American wrestling pedigree at Oklahoma State University. Eighteen years ago, mixed martial arts was still a no-holds-barred proposition. On Nov. 22, 1996, Erikson debuted in professional fighting by beating two men in one night and then battling future Ultimate Fighting Championship middleweight titleholder Murilo Bustamante to a 40-minute stalemate. He did it all while looking like the imposing, affable uncle with a crushing handshake and painful jesting headlocks. He wore gloves. Bustamante went bare-knuckle. Three fights in one night -- yeah, that was Erikson’s idea of fun.

The West Lafayette, Ind.-based family man is both mild-mannered and outgoing with chatter in retirement. His 14-fight career spanned 12 years. In the first six years, he only lost once. Following a three-year hiatus because opportunities did not hold the value he desired, he concluded his time in MMA with a three-fight losing streak, finishing with a 9-4-1 record. Like a man hitting his story stride around the barbecue grill, Erikson can be both casual and excitable when talking about winning the 1997 Brazilian Open heavyweight tournament by beating up two men in one night, the second being future heavyweight champion Kevin Randleman.

Such memories from long ago arise less and less these days since he is not one to yap about them. Yet hearing Erikson recount his rollercoaster career makes clear it is an indelible point of pride for the lifelong wrestler and former professional fighter. At 6-foot-5, 300 pounds, “The Big Cat” told Sherdog.com combat gyms are an environment from which he can never stray too far.

“The skills don’t leave you; the body leaves you,” Erikson said. “Your shape [and] everything else [leaves you] but not necessarily your skills.”

Erikson is in awe of fight preparation nowadays. It is so specialized compared to yesteryear’s methods. It does not feel like grabbing the nearest bodies and calling it training the way it once did. Erikson remains active teaching high school wrestlers, but that does not scratch the fighting itch, that parasitic thought retired combatants always work to silence, the idea that they might “still have it” on the world-class wrestling mats or in the ring.

“I’m twice as good a fighter as what I am now,” Erikson said. “I have half the body that I did then. I’m still in pretty good shape. I can still roll. Not the physical tools, the young, limber, explosive, but my mindset for the game, my knowledge -- I’ve kept learning -- has definitely increased. If I knew now what I knew then, I would retire. I would own it. My ego says I can go with some of the guys that are on the cards now.”

Erikson’s core philosophy: It is all about going in there and scrapping hard, no matter the circumstances. He still feels gratified breaking a sweat reminiscent of his full-fledged competition days. It also pushes back the hands of Father Time a bit. Navigating grappling’s exhausting limits is a commitment to staying vital, to remaining in a physical condition that allows for control of an opponent, thereby controlling one’s fate.

Erikson explains the conundrum in which he finds himself in the fighting space. It has nothing to do with his age. Fighters of outsized proportions seek him out.

“You’re kind of a luxury item,” he said.

He worked with Matt Mitrione and Sean McCorckle in the Indiana area last year, and he is known for inspiring welterweight stalwart Jon Fitch to fight in the early 2000s. Erikson likes that he is still sought out for training, yet feels hampered by his size. There is the persistent belief that big guys only work will with other big guys.

“I still have a good skill set, but my general knowledge ... I’m not sought out that way,” said the Pride Fighting Championships and K-1 veteran. “Well, the fact of the matter is, good technique is good technique.”

Erikson recently enrolled in online classes to expand his knowledge base outside the combats sports sphere. Seeking education in business administration, Erikson even worked on a paper while training with old friends in Florida. It keeps him busy and potentially opens up future opportunities. He enjoys staying on the go, working with the Indiana State Wrestling Association and USA Wrestling to secure and educate the future generation of wrestlers.

The most significant lesson Erikson believes wrestling imparts on its practitioners is a lifelong dedicated work ethic. The ability to be coachable and adjust on the fly translates success from the mats to life. In fighting, he believes it to be the great equalizer, the ability to keep a fight upright or dominate on the mat. Erikson recalls the first wave of wrestlers -- Dan Severn, Mark Coleman and Randy Couture -- transitioning their grueling training to set the foundation for how mixed martial arts contests were prepared for in the future. There were no more weekend warriors. It prompted everyone to bump it up a notch. He believes his mix of high-level wrestling knowledge and fighting experience renders him a valuable asset.

“I’m probably one or two generations removed from what [MMA fighters] are now,” Erikson said. “I love wrestling. I love the sport of mixed martial arts. If I can find something like that [in coaching], that’d be great. If not, hello real world.”

Erikson has not been out of coaching long. He was the head assistant coach for the Purdue University wrestling team for 13 years and spent 15 total years with the program. That ended in 2013. He will always be available to Purdue’s squad as long as he remains in the West Lafayette area, just not in any official capacity. He must be removed from their official training duties. Erikson recounts an ongoing conversation with his wife, Randi, regarding his coaching aspirations.

“What do you mean you have to leave?” she asked.

Leaving is an interesting proposition for a man who traveled all over the world to fight. It is important to keep his family together, namely his daughter, who is nearing high school age, in a comfortable situation close to her friends. Being frugal during his decade-plus fighting career means Erikson has the leisure of biding his time before his next step.

Finish Reading » Erikson never had rock-star delusions, even though Pride’s production team had him walk through his own highlight reel in front of 50,000-plus fans at the Tokyo Dome. Those days seem far removed now that he is tasked with keeping his daughter’s dance and baton practice schedules.
« Previous Brian Johnston: Where Is He Now? Next Moti Horenstein: Where Is He Now? »