Flying ninja robots, mutant monkey assassins and … wait, that’s next month’s UFC. No worries. UFC 102 “Couture vs. Nogueira,” booked for the Rose Garden in Portland, Ore., is stacked top to bottom with enough top-shelf violence to claim yet another Saturday night from mixed martial arts fans the world over.

With a main card headlined by two of the sport’s heavyweight heavyweights, Randy Couture and Antonio Rodrigo Nogueira, one needs no other reason to cancel that family reunion and spend an evening getting reacquainted with the wonders of television.

Plus, Demian Maia will flex his jiu-jitsu, Keith Jardine will remind the world he’s the world’s funkiest Viking and maybe those flying ninja robots will make an appearance. In the meantime, settle in for some serious fight talk. Perhaps some of it will manage to be accurate. 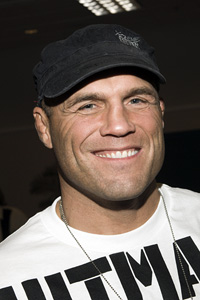 The Breakdown: Two of MMA’s heavyweight legends look to prove naysayers wrong one more time, as elder face smasher Couture takes on a suddenly shopworn Nogueira. Despite being just a few months removed from his 33rd birthday, Nogueira’s years of absorbing beatings like a Brazilian Jake LaMotta seemed to catch up with him when Frank Mir soundly trounced him at UFC 92. Couture is not coming off the fight of his life, either, as he failed to stop the centaur known as Brock Lesnar from claiming the heavyweight crown that once rested on his own head. With that said, Couture has not left his last few fights looking like a back-alley hospital patient.

With Mir having already written the script for starching Nogueira, watch for Couture to use his wrestling to keep the fight standing and rely on his boxing from there. Whether or not playing the same tune as Mir works for Couture will depend on just how much of his old self Nogueira has rediscovered in his eight months away from the cage. In a sport where nostalgia runs deep but counts for little, Nogueira has to prove he still has something left to offer after already giving so much.

The X Factor: Lost in all the dismissive chatter about Nogueira is the fact that Couture is a 46-year-old man competing in a sport that skews younger than the cast of whatever atrocious teen-age drama the CW airs. Sooner or later, Couture is going to hit the same wall Brett Favre has already run into several times. How capable Nogueira is of sending him on his way remains anyone’s guess, but he’s proven everyone wrong countless times before.

The Bottom Line: Nogueira fans should start practicing their cringing, as Couture is going to turn this into a one-sided dirty boxing display that the Brazilian won’t be able to do much of anything about. No miracle submissions this time around, as Nogueira ends up getting saved by the referee’s sense of compassion but not before taking two rounds worth of Couture’s old-school bullying.