Two of the heavyweight division’s most legendary fighters, Randy Couture and Antonio Rodrigo Nogueira, will spit on their birth certificates and try for another round of Octagon glory at UFC 102 “Couture vs. Nogueira” this Saturday at the Rose Garden in Portland, Ore.

Because the name recognition is off the charts with those two, another quality undercard gets the short end of the publicity stick. Such injustices must not go on, so here follows another round of top-to-bottom prognostication.

The prelims are a smooth mix of prospects set to break the hype meter and unimpressed veterans looking to break the meter against the head of anyone looking to take their spots. Board the Todd Duffee bandwagon, ponder Justin McCully’s cornrows and shake your head as we try to bend the laws of probability for Chris Tuchscherer. 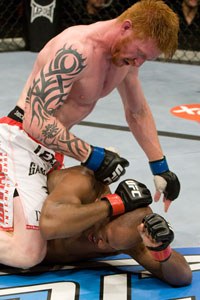 The Breakdown: In the sleeper bout of the undercard, fast-rising middleweight prospect Simpson will make a Scott Bakula-level quantum leap in competition against Herman, who has entrenched himself as the division’s top gatekeeper. While Simpson has made his name with an undefeated string of technical knockout wins, Herman’s home remains on the mat, where he works his Team Quest-influenced brand of ground strikes and submissions. How Simpson holds up against Herman’s wrestling will be critical, as the former Arizona State wrestler has yet to show us if his wrestling pedigree translates to his new profession. Consider it an important tidbit, as Simpson’s human steamroller impersonation will not impress Herman, who has the chin and experience to force almost anyone out of their comfort zone.

The X Factor: Simpson’s dominance has proven a double-edged sword, as no one is quite sure how he’ll react when he has to work for a win against top-tier competition. Proving your mettle against someone like Herman is a lot like proving you can read by taking the SAT. How Simpson handles this steep step up will play heavily in how his evening -- and any future UFC dates -- plays out.

The Bottom Line: This will be the fight eagle-eyed fans watch closely. The next wave of middleweight challengers is in the midst of announcing its presence, and Simpson could be next in line. Do not expect him to make that move against Herman, who will turn this into a rough-and-tumble affair by skipping the striking and going for a ground-and-pound siege. There will be some dicey moments for Herman, as Simpson is bound to get in his licks sooner or later. The scorecards will smile on Herman, however, as he leaves his quarry a bloody mess after three rounds of plastic surgery disguised as ground-and-pound.