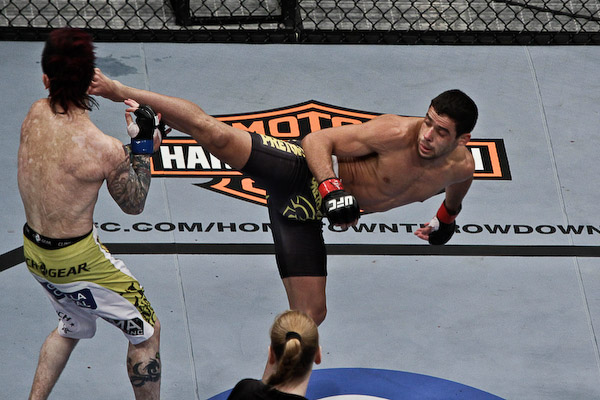 It is perhaps the most snake-bitten card in a summer full of them for mixed martial arts’ preeminent organization. To mention every fighter who withdrew from UFC 149 would be both depressing and counterproductive. Instead, it is better to focus on who will be competing on Saturday at the Scotiabank Saddledome in Calgary, Alberta, Canada, because the show must go on.

Of chief interest is the interim bantamweight title clash between Urijah Faber and Renan “Barao” Pegado. Faber has longed for one more shot at Dominick Cruz since he lost to his bitter rival last summer, but Pegado, with his impressive 18-fight winning streak, makes for a formidable challenge in his own right. In addition, former Bellator Fighting Championships middleweight king Hector Lombard will make his long-awaited UFC debut against Tim Boetsch. Plenty of hype surrounds the Cuban’s arrival, and he will have to deliver against an opponent who is coming off an improbable rally against Yushin Okami.

Here is a closer look at UFC 149, with analysis and picks.

The Matchup: Even before Cruz tore his anterior-cruciate ligament, “Barao” looked like the most likely challenger for the bantamweight belt once Faber and “The Dominator” concluded their trilogy. Cruz’s injury means the Brazilian’s opportunity has arrived sooner than originally expected, but nothing about his UFC tenure so far suggests that he will not be ready for the challenge. In garnering victories against Cole Escovedo, Brad Pickett and Scott Jorgensen, “Barao” has showcased a diverse array of skills that should serve him well in a potential five-round showdown with Faber.

Despite his championship experience, oddsmakers have listed “The California Kid” as a slight underdog, which is more of a nod toward the Nova Uniao product’s enormous potential than it is a slight toward Faber. The former WEC featherweight king has proven himself to be a better fit at 135 pounds, where he often holds a strength advantage against most of his opponents. The Team Alpha Male founder made it look easy at UFC 139 against Brian Bowles -- who, by most accounts, is a top-flight bantamweight -- slamming his foe to the mat and rocking him on the feet en route to a second-round submission victory.

Faber’s speed and athleticism will be tested as he tries to get in tight against “Barao,” who showed a good grasp of distance in outpointing Jorgensen at UFC 143. The Brazilian used his kicks to dictate range while stuffing each of Jorgensen’s seven takedown attempts, turning the contest into an entirely striking-based affair. Faber has fast hands and good power, as he demonstrated in rocking Cruz on a couple of occasions at UFC 132, but he does his best work with furious bursts of ground-and-pound. He will not be able to outpoint “Barao” on the feet, as he will find it difficult to navigate his adversary’s multi-faceted standup. If Faber allows it, “Barao” will be content to fight on the outside and pick him apart with leg kicks and jabs while carefully choosing spots to ramp up the aggression.

Any Faber opponent knows he wants to close the gap as quickly as possible, but combating his explosive quickness is no simple task. The Californian can secure a tie-up in the blink of an eye, and the lack of a distinct reach advantage for “Barao” means he will have less ground to cover to do so. The relentlessness of Faber will eventually pay dividends as the bout reaches the championship frames. At some point, “The California Kid” will successfully execute his single-leg takedown and force “Barao” to work as he throws rapid fire punches and elbows.

Faber is accustomed to winning scrambles, but he will have to be wary of leaving openings for “Barao” to put his wicked submission game to work. The 25-year-old moves swiftly when he sees an opportunity, and he is capable of putting brute force behind his chokes to elicit a tapout. It will be interesting to see who gets the best of the flurry of transitions and reversals that figure to ensue on the canvas. Faber is adept at escaping bad positions on the mat, and he is usually quick to turn the tables and force his opponent to defend his submissions.

Shop Sherdog: Urijah Faber UFC 149 Walkout T-Shirt
The Pick: Faber must be persistent in forcing clinches and battering “Barao” with punches and knees against the fence. If he can drain Pegado’s cardio, the takedowns will come a little easier in the latter portion of the fight. However, if “Barao” is allowed to stay on his feet, Faber risks losing a decision or getting caught and then submitted. In a back-and-forth battle that features plenty of shifts of momentum, Faber takes a narrow decision victory.