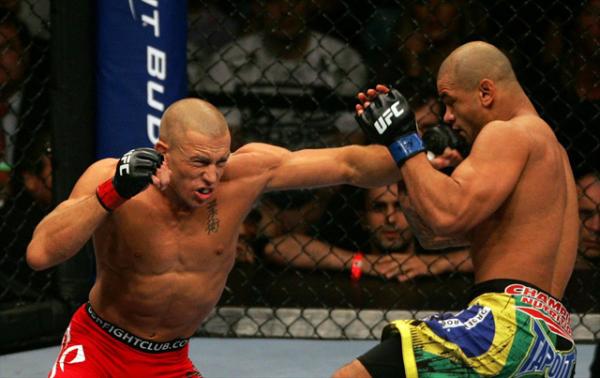 
Just in case you forgot that Georges St. Pierre and Nick Diaz do not like one another, an epic conference call between the UFC 158 main event combatants took place last week to serve as a not-so-subtle reminder. Despite all of Diaz’s flakiness when it comes to media obligations, the Stockton, Calif., native sure is capable of dropping memorable sound bites when finally cornered, and if he can manage to enrage the usually cordial St. Pierre, then all the better.

There are probably more worthy title contenders than Diaz, who has not won a fight since October 2011, but is Johny Hendricks capable of making the welterweight king lose his unflappable cool? Probably not, which is why this match was made, as mixed martial arts is as much about entertainment as it is about sport. UFC 158 features two more solid welterweight conflicts -- Hendricks vs. Carlos Condit and Jake Ellenberger vs. Nate Marquardt -- but St. Pierre-Diaz gets people to spend their money.

Here is a closer look at UFC 158, with analysis and picks:

File Photo
Diaz has finished 21 opponents.
The Matchup: Diaz planted the seeds for this bout back at UFC 137, where he called out the welterweight champion in the Octagon shortly after defeating B.J. Penn in the show’s headliner. The normally level-headed St. Pierre has not forgotten that moment, and now, nearly a year and a half later, he finally gets his desired meeting with Stockton, Calif.’s resident bad boy.

Diaz has been out of action since falling to Condit in an interim title clash at UFC 143. The Cesar Gracie product tested positive for marijuana metabolites after the bout, and, despite the tireless efforts of his legal team, Diaz was dealt a one-year suspension by the Nevada Athletic Commission. It seems strange to reward a fighter coming off a loss and a suspension with a title shot, but the masses remain intrigued by the Diaz-St. Pierre dynamic, so the match was made -- a nod to entertainment over fairness. Such is the climate of the Ultimate Fighting Championship these days.

St. Pierre showed no ill effects from reconstructive knee surgery in his return against Condit at UFC 154, as he assaulted the interim titlist with a steady diet of takedowns and ground-and-pound to capture a unanimous verdict. Outside of a Condit head kick in the third round that briefly had St. Pierre on the defensive, “Rush” was in vintage form throughout the fight.

Diaz’s wrestling deficiencies were exposed during his first stint with the UFC, as he struggled in losses to physical opponents such as Diego Sanchez and Sean Sherk. As time progressed, Diaz developed a dangerous submission game from his back, so much so that few Strikeforce opponents were willing to go to the ground with him. Instead, they elected to take their chances against his volume punching, a battle few were capable of winning. Diaz was dominant against Penn at UFC 137, battering the Hawaiian with a whopping 178 significant strikes in a unanimous decision triumph. The former Strikeforce king struggled against the movement and versatile striking of Condit, however, and was out-struck in a fight for the first time since a loss to K.J. Noons at an EliteXC event in 2007.

Diaz has an uncanny ability to make opponents freeze as he constantly moves forward while landing pitter-patter punches. He does not fear eating a few shots thanks to a durable chin, and in the long run, Diaz will give more than he gets if he can bait an opponent into trading in the pocket with him. Diaz will press forward at all costs, and if he can force St. Pierre against the fence, he will begin to unload with devastating body punches. No one in MMA is better at changing levels with punches while avoiding counter strikes.

In theory, that is how Diaz will score a major upset. However, St. Pierre is accustomed to dictating tempo in the majority of his bouts. By transitioning seamlessly between striking and takedowns, the Tristar Gym representative will not allow Diaz to get into any kind of rhythm. On the feet, “Rush” is well-versed in using feints and angles, and he uses his jab to control range and rack up points. The odds of Diaz being able to get St. Pierre moving backward are slim, and if the champion does feel overwhelmed during an exchange, he can simply drive the Californian to the mat with an explosive double-leg takedown.

Like Condit, Diaz is no match for the sheer physical strength of St. Pierre, who excels at holding position and landing meaningful ground-and-pound, whether in mount or in guard. While “The Natural Born Killer” did a decent job of staying busy on his back, he was not able to sweep or create scrambles to get back to his feet. As crafty as Diaz is from the bottom, rarely do GSP foes attempt submissions against him -- the last came when he fought B.J. Penn at UFC 58 -- which is why Diaz must work diligently to get to his feet.

The Pick: Diaz will get in his share of taunts and posturing, but St. Pierre’s takedowns will prove to be an irresistible force. A decision victory is the most predictable outcome, but it is possible that a hailstorm of punches and elbows from above bust open Diaz for a doctor’s stoppage as the championship rounds arrive. Either way, St. Pierre gets the justice he has been seeking.