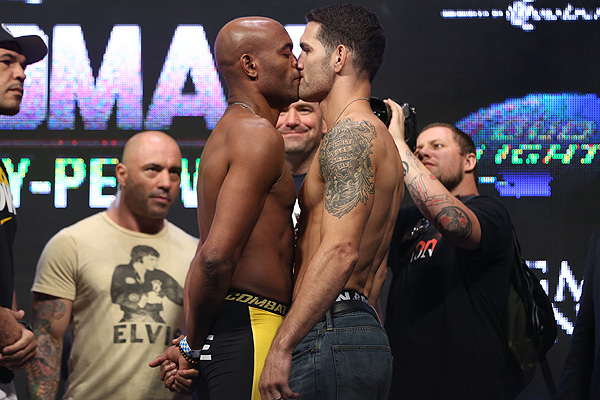 
The anticipation has been building since July, when Ultimate Fighting Championship President Dana White appeared on ESPN’s SportsCenter to announce that the rematch between Chris Weidman and Anderson Silva would headline the promotion’s traditional year-end card.

Normally, a fight such as that one could carry the marquee by itself. It will not have to, however, as Ronda Rousey, perhaps the UFC’s most talked-about fighter in 2013, defends her women’s bantamweight strap for a second time against Miesha Tate, whom she defeated under the Strikeforce banner in March 2012. It is time to put the gifts away, say goodbye to the relatives and gather ’round the flat screen: History awaits.

Here is a closer look at UFC 168 “Weidman vs. Silva 2,” with analysis and picks: 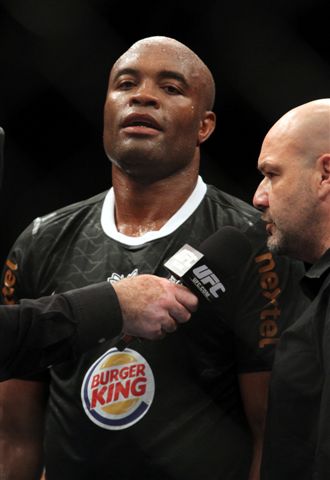 Photo: Sherdog.com
Silva is 4-0 after losses.

The Matchup: Unless you have been living under a rock for the past six months, you know that Silva shockingly relinquished his middleweight title to Weidman at UFC 162. A left hook knocked “The Spider” to the canvas, and a series of follow-up strikes sealed the upset. Immediately afterward, Silva showed little interest in belts and rematches. However, the longtime pound-for-pound king was quick to change his tune, and now we are looking at a rematch that legitimately promises to be one of the biggest fights in UFC history.

To say Weidman was the beneficiary of a lucky punch and an overconfident opponent is not entirely accurate. The Serra-Longo Fight Team member won the opening round, as he landed a takedown, threatened with a kneebar and a heel hook and out-landed his foe in total and significant strikes. Meanwhile, Silva was content to taunt and clown.

However, it was the finish in round two where Weidman displayed good technical striking acumen. By doubling up on his right hand, he forced Silva to lean back to a point where he would not be able to evade the ensuing --and ultimately decisive -- left hook.

There remains the question as to how seriously Silva took the bout. The Brazilian has long used instigative tactics to lure adversaries into his trap. When they rush in or overextend themselves, Silva is in perfect position to counter. Weidman never bit. However, Silva did seem to show an inordinate amount of disdain for Weidman -- something he normally does against more overmatched foes. There is also a possibility that at 38 years old, Silva simply does not have the reflexes to pull off some of the baiting techniques he utilized so effectively in previous years.

No matter how you look at it, Weidman is a legitimate champion and a serious threat to defeat Silva again. To make things even more interesting, Weidman could accomplish the improbable twice through totally different means.

Heading into their first meeting, Weidman was chosen by many of his peers to dethrone Silva thanks to his wrestling and grappling ability. The New York native had a 13-submission run in his first Grappler’s Quest tournament and, even more impressively, held his own with Andre Galvao at the Abu Dhabi Combat Club Submission Wrestling World Championships that same year. In an MMA context, Weidman often appears to be thinking ahead when transitioning from striking to submissions. He is able to chain together multiple attempts, and his long arms aid him in securing chokes from difficult angles.

That by itself is formidable enough, but his wrestling is what sets everything up. Weidman was an elite junior college wrestler and a two-time NCAA All-American at Hofstra University, notching notable wins over current UFC talents Ryan Bader and Phil Davis. In the Octagon, he is not afraid to commit to his right hand, which, in turn, allows him to set up takedowns more easily. Against Silva, the threat of the takedown alone can present Weidman with more opportunities to land clean punches because “The Spider” will be in a defensive position.

With all that in mind, Silva accumulated the longest winning streak and the most successful title defenses in UFC history for a reason. He is the most accurate and deadly striker in the promotion, and just a small lapse on Weidman’s part could result in the belt returning to its previous owner. While he was not successful in baiting Weidman the first time around -- Weidman did a good job of waiting until he was in striking range -- Silva has more options. Provided he can avoid Weidman’s array of trips and throws in the clinch, Silva has vicious knees and elbows in close quarters. He usually does a good job of circling out of danger, but he is also elusive with his back to the cage. If taken down, the X-Gym product is adept at neutralizing an opponent’s offense with his guard to encourage referee standups.

Silva should also employ a variety kicking techniques to Weidman’s legs in order to control range and discourage his shot.

The Pick: This bout could go either way and the result would not be surprising. Weidman, even dating back to his collegiate wrestling career, seems to be an athlete who performs best when the stakes are highest. Even with all his skills, it is hard to imagine Weidman scoring back-to-back wins over one of the all-time greats. Silva wins by KO or TKO in round three.