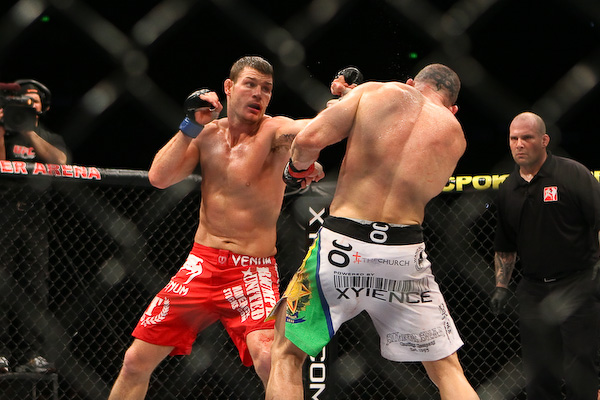 Michael Bisping has won 13 fights in the UFC, tied for 10th most all-time. | Daniel Herbertson


The Ultimate Fighting Championship returns to Brazil to open its 2013 slate with a crucial middleweight showdown between a man who once challenged for Anderson Silva’s 185-pound strap and a man who badly wants the opportunity to do the same.

Vitor Belfort knows just how swiftly the end can come against Silva, as he fell victim to a front kick from the champion 3:25 into their UFC 126 encounter. Meanwhile, Michael Bisping has been knocking on the door of title contention for some time, and a victory over “The Phenom” in his opponent’s homeland would set up a marketable showdown between the outspoken Brit and “The Spider.” Clearly, plenty will be on the line when these two middleweights square off on Saturday at the Geraldo Jose de Almeida State Gymnasium in Sao Paulo, Brazil, but it is likely that Bisping has the most to lose in defeat.

In addition to a tasty headliner, UFC on FX 7 includes the usual assortment of Brazilian mainstays and prospects designed to keep the home folks engaged for the duration. Here is a closer look at the card, with analysis and picks:

File Photo
Belfort has not lost back-to-back
bouts since 2005.

The Matchup: As the contenders continue to drop like flies, the middleweight division grows more muddled by the month. An injury to Chris Weidman and recent losses by Tim Boetsch and Alan Belcher have left a shortage of fresh and interesting challengers for Silva, the longtime 185-pound champion. Belfort has a chance to further complicate things by knocking off Bisping; the Brit will likely receive a title shot if he is victorious here, but Belfort, with memories of his front-kick knockout loss to “The Spider” at UFC 126 still fresh, would not be next in line.

Long one of the UFC’s more underappreciated talents, Bisping has compiled an impressive resume in the Octagon, as his 13 victories tie him with Jon Fitch for 10th all-time in the promotion. “The Count” has also garnered respect in defeat: a closer-than-expected setback at the hands of Chael Sonnen at UFC on Fox 2 did little to hurt his standing. “The Ultimate Fighter” Season 3 winner has since rebounded by posting a unanimous verdict over Brian Stann in September.

Belfort, meanwhile, gave light heavyweight king Jon Jones the greatest scare of his title reign to date, nearly submitting the champion with an armbar from his back in the opening frame at UFC 152. That would be the Brazilian’s one shining moment in the bout, however, as he was ultimately worn down and submitted in round four.

That armbar, along with the rear-naked choke Belfort used to tap Anthony Johnson at UFC 142, marked the first submissions the former 205-pound champion had attempted since 2006, when he faced Dan Henderson under the Pride Fighting Championships banner. Although it is good to see Belfort, a Brazilian jiu-jitsu black belt, re-incorporating that aspect of his arsenal, it is unlikely that he will defeat Bisping by going the submission route. Instead, this contest is likely to go one of two directions: a quick and explosive finish by Belfort or an extended, five-round affair that showcases Bisping’s defensive boxing, skilled movement and stellar conditioning.

At his best, Belfort explodes out of the gates with a purpose, as he did in first-round stoppages of Rich Franklin and Yoshihiro Akiyama during his second UFC tenure. Belfort’s hand speed allows him to unload on opponents with blistering combinations; if Bisping finds himself rubber-legged, as he briefly did in the first round of his encounter with Stann, he might not have an opportunity to recover. The downside of this approach is that Belfort can fade in the latter stages of a bout, leaving someone with the superior cardio of Bisping plenty of chances to land accurate combinations in the championship frames.

If Belfort, a southpaw, cannot create angles and opportunities to lay hands on Bisping, his night will become increasingly more frustrating. “The Count” is a sound defensive fighter with a solid understanding of how to control the cage. He is especially adept at racking up points on the feet while moving in and out of danger, so Belfort needs to maintain his poise if things do not go his way early. Recently, Bisping has shown an ability to mix up his attacks by landing timely takedowns, but Belfort should be strong enough to thwart most of his opponent’s shots.

The Pick: Belfort struggles when faced with the pressure of a relentless wrestler, but Bisping will probably be on his bicycle for most of this contest in hopes of avoiding the Brazilian’s dangerous hands. Belfort will eventually find the opening he needs to land a tide-turning strike -- perhaps a left hook -- and he will finish the job with one of his patented flurries in the second round.