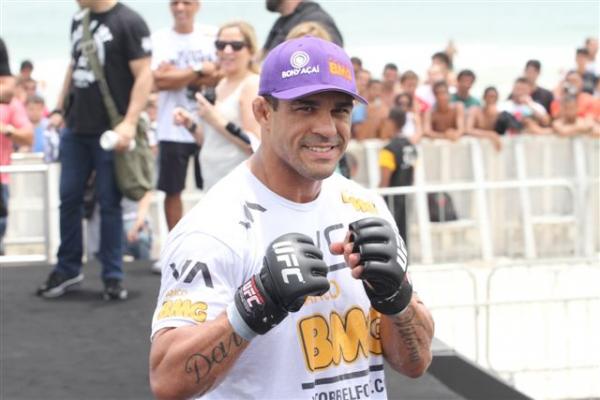 
Luke Rockhold was a largely unproven commodity before he knocked off Ronaldo “Jacare” Souza to become Strikeforce middleweight champion in September 2011. Now, the American Kickboxing Academy product finds himself perhaps one fight away from challenging for Ultimate Fighting Championship gold.

To earn that privilege, Rockhold must first get past Vitor Belfort on Saturday in the UFC on FX 8 headliner. “The Phenom” has been on something of a roll himself, ruining Michael Bisping’s title dreams with a resounding head kick and follow-up punches at UFC on FX 7 -- his third victory in four outings. The Brazilian handled himself admirably in defeat, as well, throwing a scare into Jon Jones with a tight first-round armbar at UFC 152. Belfort would like nothing better than to get another shot at Anderson Silva, and he figures to be highly motivated to beat Rockhold in front of his countrymen at the Arena Jaragua in Jaragua do Sul, Brazil.

Additionally, the aforementioned Souza makes his UFC debut -- albeit against a replacement foe in Chris Camozzi -- in the co-main event. Here is a closer look at the UFC on FX 8 card, with analysis and picks:

The Matchup: Though these things are subject to change at a moment’s notice in an industry increasingly driven by entertainment, it would seem that the winner of this 185-pound scrap would have the inside track to a title shot.

Dave Mandel
Rockhold enters the cage at 10-1.
Rockhold, the former Strikeforce middleweight ruler, rose from the ranks of Challengers series prospect to champion with an upset victory over Souza in September 2011. The American Kickboxing Academy standout successfully defended the title against Keith Jardine and Tim Kennedy in 2012 before injuries twice derailed a potential bout with Lorenz Larkin. Thus far, staying healthy has proven to be the greatest challenge in the promising 28-year-old’s career.

Meanwhile, Belfort looked explosive in scoring a second-round technical knockout victory against Bisping at UFC on FX 7 in January. Since 2007, “The Phenom” has lost to only Silva and Jones -- two of the top three pound-for-pound fighters in the world today. The Brazilian was granted a therapeutic use exemption for testosterone prior to facing Bisping, something which remains a controversial subject within the sport.

Belfort overwhelmed Bisping with power and speed, but he will not be able to do the same against Rockhold, a fluid athlete with a well-rounded skill set and a four-inch reach advantage. Bisping did his best to keep Belfort at bay with his jab and leg kicks, but the Rio de Janeiro native was found success with head kicks, including what would prove to be the decisive blow in the second round. Already known for his blistering hand speed, those kicks could prove to be a useful addition to Belfort’s arsenal if he is able to utilize them consistently.

As usual, Belfort is at his most effective when he is able to hurt and finish his opponent in the early going, as he sits back and waits for openings to land fast and powerful punches. However, if Belfort is not able to swarm Rockhold within the first 10 minutes, he could very well fade in later rounds.

Rockhold can frustrate his opponent by staying on the outside and landing a variety of punches and kicks. The Strikeforce veteran is an effective counterstriker who can control the cage with his quickness and footwork. Rockhold also displayed solid takedown defense against Kennedy, should Belfort attempt to get the fight to the canvas. A Brazilian jiu-jitsu black belt, Belfort’s long-dormant submission game has surfaced in recent bouts, as he tapped Anthony Johnson with a rear-naked choke at UFC 142 and put a scare into Jones with an armbar at UFC 152.

It is likely that Rockhold will use his length and athleticism to keep the majority of the fight standing. The American can land accurate combinations in greater volume than Belfort, but, as evidenced by six submission victories, he is also competent enough to hold his own on the ground.

The Pick: There is always the chance that Belfort’s hands alter the course of this contest, but Rockhold is a better all-around athlete than Bisping, and he will be wary of his foe’s knockout power early on. As the bout progresses, Rockhold continues to rack up points on the feet. If Belfort fades badly, Rockhold can finish this fight in the later rounds. At the very least, he takes a unanimous verdict.