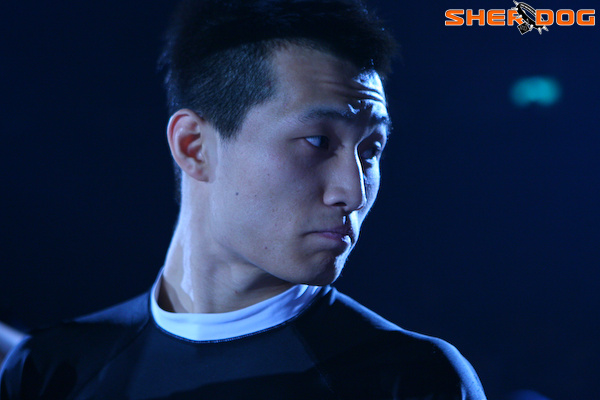 Dustin Poirier first truly made his presence known to mixed martial arts fans at UFC 125, when he cruised to a unanimous decision against the highly regarded Josh Grispi. At the time, Grispi was on the short list of contenders expected to challenge for Jose Aldo’s 145-pound belt. While Grispi has faded from that conversation, Poirier has continued his ascent through the division, racking up four wins in as many UFC appearances.

Meanwhile, Chan Sung Jung elevated his status from entertaining brawler to title hopeful on the strength of a shocking knockout victory of former No. 1 contender Mark Hominick in December. During their World Extreme Cagefighting days, it would not have seemed likely that these two would have emerged as main event dance partners, but, in MMA, a lot can change in a couple years. Poirier and Jung will square off in the UFC on Fuel TV 3 headliner on Tuesday, and the winner could very well have Aldo in his sights.

Going down from the Patriot Center in Fairfax, Va., UFC on Fuel TV 3 also features the return of Donald Cerrone, who fell just short in his bid to go 5-0 in 2011. “Cowboy” looks to begin 2012 with a bang against the heavy-handed Jeremy Stephens in what figures to be an entertaining lightweight matchup.

Here is a closer look at the UFC on Fuel TV 3 card, with analysis and picks:

Dustin Poirier File Photo
Poirier has won five straight.
The Matchup: The UFC’s featherweight division is becoming curious indeed, with Hatsu Hioki passing up a title shot against Aldo because he felt he was not adequately prepared. That has put some of the younger talent in the weight class, like Eric Koch, who will face Aldo at UFC 149, on a faster track to the championship than originally expected. That youthful and talented group includes both Poirier and Jung, either of whom could be next in line with an impressive performance in the UFC on Fuel TV 3 main event.

It was not all that long ago that Jung was best known for his memorable slugfest with Leonard Garcia at WEC 48, where he dropped a controversial split decision to the Jackson’s Mixed Martial Arts representative. “The Korean Zombie” has looked much better in the UFC, submitting Garcia with a twister in their rematch before shocking former No. 1 contender Hominick with a seven-second knockout in December.

Jung has a reputation as a fearless brawler, but, as he demonstrated against Hominick, he is more than capable of capitalizing on the mistakes of a careless adversary. When Hominick swung wildly and missed with a left hook at the outset of their UFC 140 encounter, Jung dropped the Canadian with a straight right hand before finishing the contest with strikes on the ground. It is no secret that the Korean Top Team export likes to stand and trade. Jung presses forward relentlessly, and when he gets popped, it only encourages him to answer with haymakers of his own.

He will need to be precise against Poirier, a well-rounded competitor who is comfortable throwing combinations on the feet or using well-timed ground-and-pound on the mat. Most importantly, the Louisiana native has displayed a good in-cage IQ, forcing opponents to fight away from their strengths. In his most recent bout, Poirier wasted little time in taking Max Holloway -- an accomplished striker who was holding his own in the standup -- to the canvas before ending the contest with a triangle armbar. On the feet, Poirier should be able to slip Jung’s power punches and answer with combinations. If he catches the Korean leaning, he can follow up with well-placed head kick. The more damage Jung takes, the less accurate his own striking will become.

Poirier is plenty aggressive himself, and his solid conditioning and wrestling ability will allow him to dictate the tempo and location of the fight. Poirier takes a measured approach in top position, throwing punches and elbows while patiently waiting for an opportunity to secure a submission, and he will chain together multiple submission attempts if his initial try fails. Jung is capable on the ground, as well, but Poirier’s physical strength will allow him to control the positioning and win rounds here. Jung, who has not been forced to fight from his back in his UFC and WEC career so far, will have to look to sweep and get back to his feet or risk losing valuable points.

The Pick: Poirier is good enough to bang with Jung standing, but the higher percentage approach is to tire him out with takedowns and ground-and-pound. As “The Korean Zombie” wears down, Poirier capitalizes with a submission in the third frame.