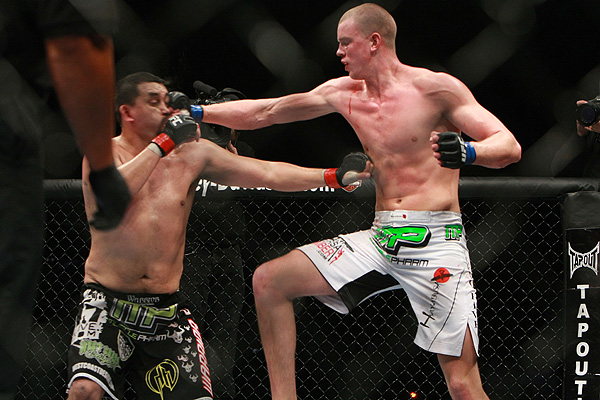 
While we can acknowledge that the Ultimate Fighting Championship’s heavyweight division has improved drastically over the past few years, establishing depth remains a work in progress. The fact that still-developing talents Stipe Miocic and Stefan Struve were deemed worthy of a headlining gig at UFC on Fuel TV 5 this Saturday in Nottingham, England, only serves as further proof that brighter days are ahead for what is the promotion’s most lucrative weight class.

Struve and Miocic emerged with key victories in the much-ballyhooed all-heavyweight main card at UFC 146 in May. Another win for either will serve to further establish his viability as a contender. Most importantly, both fighters provide plenty of violence and entertainment potential. In addition to the heavyweight attraction, UFC on Fuel TV 5 features national favorites such as Dan Hardy, Brad Pickett and John Hathaway to keep the home folks happy. Keith Mills/Sherdog.com
Miocic enters the fight undefeated.
The Matchup: Perhaps we should temper our expectations just a bit for Miocic, an up-and-coming big man with eight finishes in nine professional appearances. After all, the Ohioan gave a lukewarm performance in taking a unanimous decision over an undersized Joey Beltran in his Octagon debut, and knocking out Philip De Fries -- who is nowhere near anyone’s Top 10 -- should be considered business as usual. Even Miocic’s signature win, a technical knockout of Shane del Rosario at UFC 146, came against a man who had spent nearly a year on the shelf after hurting his back in a car accident.

With that said, the talent pool at heavyweight is improving but still thin, and Miocic has all the makings of a future contender. A former amateur boxer and collegiate wrestler, Miocic made significant progress in his victory over del Rosario. After absorbing some kicks to his legs and liver early in round one, the Strong Style Fight Team export responded by landing combinations in the pocket and scoring a takedown at the end of the frame. In round two, he executed another takedown and stayed heavy with ground-and-pound from above, forcing a stoppage with vicious elbows at the 3:14 mark. Miocic was outstruck and likely lost the opening stanza, but his ability to adjust between rounds bodes well for his future.

Struve, who, at 24, is six years younger than Miocic, has already acquired a wealth of UFC experience. Like his opponent, the Dutchman notched an important victory at UFC 146, submitting the heavy-handed Lavar Johnson inside of a round to improve to 8-3 within the promotion. Though Struve is sometimes dismissed because of his tendency to absorb large quantities of damage, “Skyscraper” is capable of pulling off the unlikely comeback thanks to his ability to remain composed in dire situations.

It would be nice to see Struve begin to utilize his considerable reach more often, but, in recent bouts, Dave Herman and Johnson were able to get inside of the Team Schrijber representative to land significant shots. Where Struve does take advantage of his length is on the mat, where he uses his lanky frame to control his opponents. He is among the most prolific fighters in the UFC at transitioning from one submission attempt to another, which works well since he has yet to successfully defend a takedown during his tenure. In fact, Struve will often pull guard in hopes of luring an overaggressive foe into a triangle choke or armbar.

Miocic has dangerous power in his right hand, and his three-inch reach disadvantage is not nearly as pronounced as some Struve opponents. If the contest hits the canvas, however, Miocic must be measured in his attacks as he looks to advance position, so as not to allow Struve to work his guard. Miocic’s wrestling background suggests he will be able to control Struve and dictate the action better than some of the Dutchman’s previous victims. On the feet, his ability to work angles should pay dividends against a fighter who has not yet grasped how to fully utilize his assets.

The Pick: Struve has defied the odds on more than one occasion, but he has also suffered brutal knockout losses at the hands of Junior dos Santos, Roy Nelson and Travis Browne. Miocic will be the fourth man to finish “Skyscraper” in the UFC, catching him with a big right hand and following up with strikes on the ground for a second-round finish.