In an evening with an unreal amount of highs and lows, the number of those who won a great deal or ended up losing a lot is equally high. But for our purposes, let’s survey only the notable figures from either scenario.

There has been no more vocal a detractor of EliteXC’s efforts and no one who stands more to gain by the implosion of the Slice Machine than UFC President Dana White. In addition to bathing in the glee that comes with Slice’s loss to a UFC washout, White also gets to go back to his doting flock of followers in the mainstream press and reset the narrative of “I told you so and here’s what to think next.” White understands just how obsequious and malleable many of our friends in the traditional press -- who are new to covering MMA -- actually are. He will very likely use this event to remind them of the UFC’s myriad virtues only to watch them regurgitate them after rote memorization.

Despite all of the clumsy fumbling EliteXC officials were forced to endure thanks to Shamrock’s inopportune cut, the final event on display Saturday night was quite good. Unlike the initial EliteXC-CBS venture, this event largely featured well-rounded, high-level MMA fighters putting on gutsy performances. And unlike the sophomore EliteXC-CBS card, this event showcased real MMA stars. While the Slice debacle tarnishes the impression of the event, the truth is, for free and live MMA on network television, this was a successful attempt.

Slice’s position as the supposed “face of MMA” is a concept mostly espoused by the mainstream press given their proximity to the sport. And while their knowledge of MMA is generally nothing short of passing, most had picked up on the meme that Slice was something of a fraud who either didn’t belong in the professional ranks or was too immoral a figure to lionize. Slice’s demolition at the hands of the UFC’s flotsam and jetsam does nothing but, in their minds anyway, validate not just their criticism of the sport but the sport itself. While reading too much into their attacks should be avoided, accepting that their attacks will grow sharper and more pronounced should not. 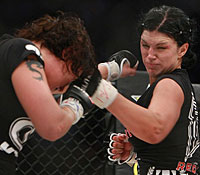 Dave Mandel/Sherdog.com
With another decent victory under
her belt, Gina Carano’s stock
continues to rise.
4. EliteXC

A sharp distinction here needs to be drawn between parent company ProElite, the bureaucratic conglomerate machine encumbered by debt and ineptitude, and the fighting promotion EliteXC. The latter, of course, can be retooled to version 2.0. The brand awareness of EliteXC has room to grow, but Carano and Slice (for one more event, at least) have enough star power to carry the promotion. With Showtime’s interest and CBS’s participation, there is legitimate reason to hope that even if ProElite disintegrates, more polished and reliable handlers could potentially rejuvenate a salvageable organization. The purchase could be a fire sale, but that doesn’t make it a bad deal.

Their clothes are gaudy and almost universally worn by everyone not living the fast life, but Saturday was a good night for the brand and its entertainment ventures. Affliction’s decision to allow Arlovski to fight on the EliteXC card in exchange for incredibly heavy marketing and Affliction brand saturation was a complete no-brainer. The upside is considerable: The clothing line was heavily marketed to the key advertising demographic, the entertainment end of Affliction’s efforts were on display to same said audience and the quintessential imagery of the key star of Affliction’s MMA ventures -- one Fedor Emelianenko -- was on continuous loop during commercial breaks. Whether Affliction’s presence during the EliteXC broadcast ultimately makes a difference for its next co-promoted effort with Golden Boy is anyone’s guess, but the choice to make the push during Saturday’s broadcast is purely academic.

If nothing else, Petruzelli did every hardcore fan and himself a gigantic favor Saturday night. For purists, Petruzelli finally felled the legend of Slice, and for himself, Petruzelli got another chance at a decent payday and future fight(s). It’s difficult to read into anything beyond that, but in the difficult game of modern professional MMA, that’s more than enough to count. If nothing else, it’s a permanent accolade Petruzelli will always have. And immortality ain’t such a bad thing.