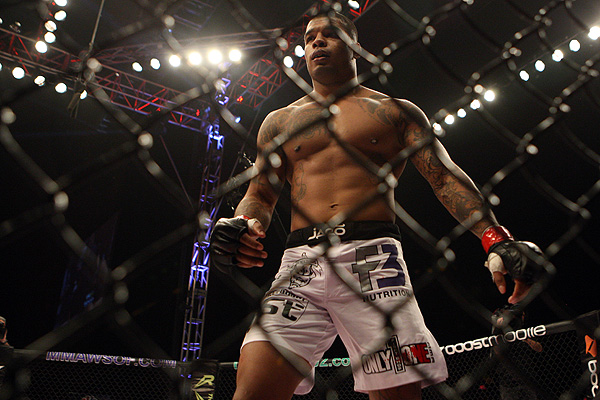 The five-bout main draw airs on the NBC Sports Network, while the prelims stream live and free on Sherdog.com. While lacking in sheer star power, the show has a little something for everyone.

Here is a closer look at the WSOF 4 bill, with analysis and picks:

File Photo
DeAnda has won 10 of 11.
The Matchup: Visa issues forced Spong out of a potential meeting with DeAnda at WSOF 3, but the man known as “King of the Ring” has remained active in the combat sports realm since stopping Travis Bartlett in his mixed martial arts debut. Most recently, Spong defeated three high-level kickboxers -- Michael Duut, Filip Verlinden and Danyo Ilunga -- in one night to win the Glory 9 tournament and a $200,000 purse in June. Even more impressive was the fact that Spong survived adversity against Duut, rallying for victory after being dropped in the bout’s opening 15 seconds.

Spong has also hinted at pursuing bouts in professional boxing later in 2013, so it is unclear how consistent his MMA endeavors will be. Whenever he is in the cage, his standup proficiency will be nearly unparalleled. His debut against Bartlett had the feel of a glorified exhibition, as Spong unloaded seemingly at will against his overmatched opponent. The Blackzilians member dropped Bartlett early with a head kick, and with his man seemingly content to stand with his back against the cage for much of the encounter, Spong was free to tee off with punches and kicks to the head, legs and body. A devastating straight right hand mercifully brought an end to the fight before the first round expired.

At the very least, DeAnda represents a step up in competition, though how much remains to be seen. Unlike Bartlett, the Tachi Palace Fights light heavyweight champion has displayed good lateral movement and is fairly adept at slipping and countering his opponents. However, what worked at TPF 15 against Anthony Ruiz, who was largely predictable in his attacks, is not going to be nearly as effective against Spong. In capturing TPF gold, DeAnda showed a penchant for power punches, and he did much of his best work by unloading with uppercuts and hooks in close quarters.

At 5-foot-8, DeAnda is short for a light heavyweight, but he compensates with consistent head movement, which allows him to get inside against taller foes. Unfortunately, Spong’s diverse arsenal of punches and kicks could make DeAnda’s capable boxing look rather pedestrian by comparison.

If DeAnda sees the opportunity to shoot for a takedown, he should do so, because taking the Suriname-born Dutchman out of his element is his best chance to spring an upset. Getting within takedown range will be the true challenge.

The Pick: Even if DeAnda gets in his licks, he will expend a fair amount of energy in the process. As hands get lower and movement slows, Spong will have plenty of opportunity to capitalize, winning by knockout or technical knockout in round two.