Last month’s tussles list delivered the goods. The fights we picked for you to watch were some of the most exciting on their individual fight cards.

Universidade da Luta fighter Fernando Vieira submitted Sweden’s Martin Svensson to collect the Zone FC featherweight strap. Andre Reinders returned to his winning ways with two victories in one night to crown himself the Czech Republic’s strongest middleweight. Paul Sass continued to delight the Liverpool crowd with another first-round submission to improve to 10-0.

Shuichiro Katsumura scored a tremendous upset over world-ranked bantamweight Masakatsu Ueda to capture the Shooto 132-pound belt. And last but definitely not least, Bruno Carvalho destroyed compatriot Vitor Nobrega to defend his WFC middleweight title in emphatic fashion and stake a claim for an even bigger stage.

A couple of quality fights have already kicked off April as well. Eugene Fadiora had a three-round war with Danny Mitchell for the Bushido Challenge welterweight title, which ended in the Bamma-experienced Fadiora handing Mitchell his first pro loss. Lithuania’s Sergej Grecicho also spoiled the miracle-like comeback of Jerry Kvarnstrom, who returned to action after suffering a career-threatening heart muscle infection in early 2008.

It will be interesting to see if April’s list can once again wow crowds from Nottingham to Tokyo, from Juiz de Fora to Uncasville, Conn. Remember, this article does not focus on the major bouts you already know to watch but rather on fights from all over the planet that are worth seeing. Bouts from UFC, Strikeforce, WEC, Dream and SRC are excluded by design.

The main event of Wreck MMA’s sophomore show pits Ottawa’s Nick Denis against experienced Team Quest rep Ian Loveland. “The Ninja of Love,” Denis rose to fame during his run in the Sengoku featherweight tournament last year where he upset Pancrase prodigy Seiya Kawahara before falling to eventual finalist Marlon Sandro. Loveland, nicknamed “The Barn Owl,” had a few tough losses early in his career but is currently riding a five-fight win streak that dates back to 2007. Will the Lindland student spoil the hometown kid’s return appearance in Canada?

Herb, Germany’s strongest middleweight, returns to the ring after a successful 2009 campaign that saw him go 4-0 with two wins on the M-1 circuit. A European BJJ champion, he opens up 2010 by headlining the third event for fledgling promotion Backstreet Fights against French muay Thai specialist Gregory Babene. The model student of UFC fighter Cyrille Diabate, Babene has snapped an unparalleled slide with two big wins over Dream vet Alavutdin Gadjiev and compatriot Christophe Daffreville.

The marquee matchup of Greatest Common Multiple ladies division’s fifth effort pits No. 7-ranked featherweight Takabayashi against No. 4 lightweight Fujino in arguably the biggest women’s fight of the month. Submission specialist Takabayashi scored a career-defining win over "Windy Tomomi" Sunaba last year and went the distance with girl fight queen Megumi Fujii in 2007. Fujino has dropped three straight decisions in the last one and a half years and has thus decided to drop down to 115 pounds. Takabayashi certainly will not be a pushover in her featherweight debut. 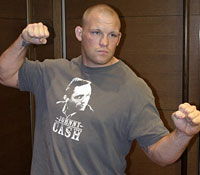 It is remarkable that these two gentlemen who sport a combined total of 115 professional bouts have not crossed paths earlier in their 10-plus-year careers. Monson did not look good in a split-decision win over unheralded John Brown in January, but he bounced back with a first-round submission of BJJ black belt Francisco Nonato in France in March. Based on recent form, the “Snowman” should be the favorite.

A very intriguing matchup also tops the bill at MMA Big Show’s latest effort as American Top Team’s Lucas Lopes takes on “Ultimate Fighter” season 11 alumnus Victor O'Donnell. Lopes holds big wins over his current teammates Thiago Alves and Antonio Mendes as well as Strikeforce and EliteXC veteran Wayne Cole. He is also riding a four-fight win streak. O’Donnell had a war with top prospect Chris Camozzi in the opening round of the current TUF season and just came up short after three rounds of action despite breaking his orbital bone in the first stanza.

Tata Fight Team’s Paulo “Bananada” Silva is one of the most hard-nosed lightweights in Brazil. A product of the grueling Rio Heroes circuit that brought vale tudo into the new millennium, the Rio de Janeiro native has fought once every two months for the last three years. After settling a dispute with Giovani Diniz less than a month ago, he will return to action against highly rated M-1 vet Hacran Dias, who fights out of Andre Pederneiras’ superstar camp, Nova Uniao. Does “Barnabe” have the courage and the skill to snap Silva’s seven-fight win streak?

Some excellent flyweight action coming your way from Tokyo’s Shinjuku Face as Sherdog.com’s 10th-ranked flyweight Masaaki Sugawara takes on 2008 Shooto rookie champion and currently seventh-ranked Shooter Fumihiro Kitahara. Sugawara most recently dropped a tough decision to Ryuichi Miki in a rematch of their 2005 encounter, while Kitahara is on a three-fight win streak. The Paraestra Sapporo fighter already won a decision over seasoned veteran Masatoshi Abe last summer and is now looking to add Sugawara’s scalp to his resume as well.

If there was one fighter deserving of a big break and a shot at fighting in front of a bigger audience, it has to be England’s Jim Wallhead. “Judo Jimmy,” the primary training partner for UFC contender Dan Hardy, has been fighting his rear off in recent years, taking on and beating virtually everybody who had the guts to face him on the European circuit. Now a participant in Bellator’s welterweight tournament, the 26-year-old will take on BJJ brown belt Jacob McClintock. The touted teammate of UFC fighters Ryan Bader and C.B. Dollaway, McClintock sports a perfect 6-0 record.

2. Jason MacDonald vs. Matt Horwich
Let's Get It On MMA -- April 23 in Edmonton, Canada

LGIO promoter Elaine McCarthy has done things in style and lined up a pair of Ultimate Fighting Championship veterans to headline her first show. Local hero Jason MacDonald compiled a 5-5 record in the UFC from 2006-2009 and has some of the best jiu-jitsu in MMA. One-time ADCC submission wrestling participant Matt Horwich is no slouch on the mat either: The 32-year-old Team Quest fighter has already submitted half a dozen current or former UFC fighters. To make matters even dicier, he also holds a win over MacDonald via armbar. Revenge or repeat?

It took the promotion/management agency J-Rock almost two months to find a worthy opponent for the retirement fight of Japanese MMA and judo legend Hidehiko Yoshida. In the end the Astra brass settled for Yoshida’s top student and designated successor Kazuhiro Nakamura to challenge his master in his final fight. Such a scenario has almost always yielded poor results for the fighter who is bidding farewell: see Nobuhiko Takada’s retirement match against understudy Kiyoshi Tamura. Can Yoshida overcome that trend against an opponent 10 years younger who knows him inside out?