The misery and suffering being experienced in various parts of the world during the past couple of weeks have put events in the MMA world into their proper perspective.

The remarkable Japanese people are standing together as one, as the country endures its worst crisis in more than 60 years. Shooto, Pancrase and Deep are putting together charity events with several solid scraps on them, one of which is features in our monthly “10 Tussles” series.

Welterweight champion Zavurov is one of the top talents M-1 has on its roster. The lone blemish on his otherwise perfect record is a close 2009 split decision defeat to Rashid Magomedov. A 26-year-old boxer from the mountains of Dagestan, Magomedov combines good footwork with a solid sprawl and excellent submission defense -- a blend that has frustrated his opponents. Most recently, the knockouts have come for him, as well, finishing two of his last three fights inside the first round. That has earned him a shot at Zavurov, who also hails from the North Caucasus region.

Two of the most underappreciated lightweights on the European circuit will lock horns in the co-main event of Cage’s 15th edition. Slovakia’s Buchinger won the promotion’s lightweight strap with a surprise win over Cage Force veteran Jarkko Latomaki in November. Kuivanen, who splits time training between Helsinki’s GB Gym and American Top Team in Florida, is on a mission to take the belt back to Finland. The 26-year-old submission specialist is currently on a seven-fight winning streak and only went the distance once during that run.

Monson is living his fighting career true to Kurgan’s motto: “It’s better to burn out than to fade away.” Having turned 40 years old, “The Snowman” is still going strong, fighting nine times last year. His second appearance of 2011 brings him back to his adopted home of Florida, where he takes on former King of the Cage heavyweight champion Lopez. Monson has been in top form as of late, submitting his last five opponents. The last time Lopez tapped was almost six years ago -- to the late Justin Levens -- so finishing him will be quite a challenge, even for a master grappler like Monson. 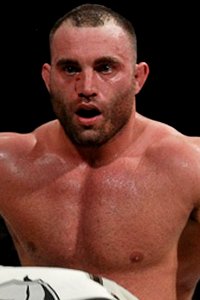 Canadian promotion Ringside has quietly turned in nine events since 2009 and is making waves beyond the Quebec borders with its impressive April 9 lineup.

Besides the main event between UFC veterans Patrick Cote and Kalib Starnes, the show features “The Ultimate Fighter” alum Seth Baczynski taking on undefeated prospect Alex Garcia and, of course, the light heavyweight slobber knocker between Desilets and Hollet.

Neither man has tasted defeat in recent years, so both will come in confident.

Desilets has excellent hands, while muscleman Hollett likes to attack his opponent’s limbs with submissions.

On the undercard of the stacked twin championship show to support the victims of the catastrophic March 11 earthquake, former Shooto lightweight champion Inoue will take on current Shooto Pacific Rim 143-pound titleholder Tsuchiya in a non-title affair. Inoue had a bumpy end to his 2010 campaign, with back-to-back losses against the irresistible Hatsu Hioki and the vastly improved Kazuyuki Miyata; the latter represented his first-ever fight outside of Shooto. Tsuchiya, four years “Lion’s” junior, is riding a six-fight winning streak, including a brutal knockout over Sengoku vet Shintaro Ishiwatari.

It will be a homecoming for Kang. The 2006 Pride Fighting Championships welterweight grand prix finalist has not fought in his father’s native country since headlining the final Spirit MC event in August 2008. Fledgling promotion Road FC wants to make him its star attraction, signing the 33-year-old to a multi-fight contract. His first opponent will be fellow Pride and K-1 Hero’s veteran Lee. The 29-year-old former Spirit MC heavyweight champion weighed as much as 235 pounds during his heavyweight run and will make his middleweight debut against Kang.

Filho’s MMA career has been characterized by unfulfilled promise. Held back by the success of his master, Murilo Bustamante, during his days in Pride and by a painkiller addiction in the WEC, the former judo and Brazilian jiu-jitsu standout has been relegated to fighting on his home circuit again. Looking to make a name for himself by taking out the former WEC titleholder is rising talent “Ronny Markes.” The 22-year-old Nova UniÃ£o product has won nine of his 10 career bouts, finishing eight opponents.

Swedish organization Superior Challenge has risen to challenge established powerhouses like M-1 Global, KSW and Glory for the title of top European promotion. Its main event this time would easily pass as a featured bout on any event stateside, as former UFC middleweight title contender Leites takes on former UFC light heavyweight championship challenger Horn. Even though Horn has managed to record 87 career victories in the past 15 years, he has never won against an opponent from Brazil. Can he finally break his hex?

Originally slated to meet in October, Curran, the lightweight tournament winner of Bellator’s second season, was forced to withdraw after suffering a shoulder injury in training. Now, 10 months after his last bout, he will finally get to square off against the promotion’s dominant champion, Alvarez. A Top 5-ranked lightweight, the 26-year-old Philadelphian submitted UFC veteran Josh Neer and beat down former Sports Illustrated cover boy Roger Huerta in his two 2010 bouts. Curran has won four straight, but he will be coming into the fight with Alvarez as a heavy underdog.